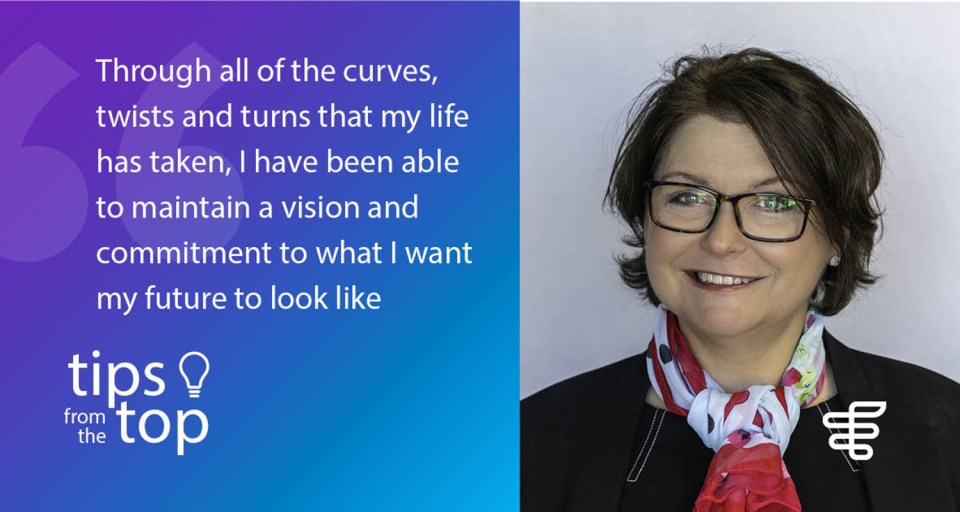 Over the years of working at Encompass Health I have been asked to share “my story” and to this day this request still gives me pause as I think and ask the question – what is my story? Followed by why are people interested in my story? I am sure most of us have this reaction on some level when asked to share details of our lives that to us seem typical and ordinary.

I have learned over the years that sharing your story is an opportunity not only for the receiver, who may find value and inspiration in what is shared, but there is also immeasurable value for the person sharing through being vulnerable with their audience.

My career with Encompass Health began not long after graduating from pharmacy school. I was hired to be a PRN pharmacist by a joint venture hospital, which at that time contracted pharmacy services to the hospital that would become HealthSouth Rehabilitation Institute in Tucson, Arizona.

I still clearly remember the interview, the human resources director and my first days getting to know the hospital and pharmacy. I recall the long hallways, the medication carts that had to be filled daily, shelves with bins of drugs that went up the walls in the pharmacy and the patients. I can recall the names of some of those patients, and I am still friends with some of them and some of the people I worked with at that time.

The job held a lot of meaning for me. I not only had a job soon after graduating from pharmacy school, but as a person with a disability, it meant that I was seen as a capable professional. This was also a job and ultimately a career that I had to fight for, and it was a real victory for me.

At the age of 7, I became completely paralyzed from the neck down and required a tracheotomy and respirator to breath. I could only blink my eyes and move most of my face. I was diagnosed with Guillain-Barré Syndrome. Not only is this a rare autoimmune disease, but even rarer in a 7-year-old child without any apparent triggering event. A 7-year-old’s world is consumed with playing with friends, dance classes, hanging out with family and school, and those were all of the activities I cared about, but could no longer participate in.

During the nearly six months I was hospitalized, I don’t have much memory of being sick, but I do remember receiving a giant white rabbit from my father’s work, nurses who made a scrapbook of cards and pictures and also acted as the tooth fairy when I lost several teeth. I also remember the therapists taping pens wrapped in towels to my hands so I could relearn how to write and strapping me to a John Deer pedal tractor to ride around the hospital.

My first memories of healthcare were positive and of people who really cared.

The recovery was long, and I missed a year of school, which I had to make up over the summer so I could return to my class. At the end of that year, I was not only able to rejoin my class, but I was also able to walk again. Over the years I not only gained strength, I was also able to participate and excel in a variety of sports, from softball, tennis, swim team, track and cross country to cross-country skiing. Sports fed my competitive nature, and I learned to be successful by setting goals, practicing and being disciplined.

High school is where I was truly able to excel in sports and became a state record holder in distance events and won events which led to junior Olympic trials. During my high school years, I became the geeky science “jockette,” as I was called in my yearbook. I also decided along the way that going to school to be a physician would be the best career path. I graduated from high school at 16 and began my premed studies at a University of Wisconsin campus, while living at home. I made new friends who were all following the same path as me, and we studied and worked hard together.

About two and a half years into my premed program, my world turned upside down again. I was losing my balance and falling. This was the start of becoming completely paralyzed and again requiring a tracheotomy and a respirator to breathe. The difference this time, life is more complex at age 19 than at age 7. I experienced and remember real fear—fear of not breathing, of dying, of not being able to talk, feed myself or brush my teeth. All I wanted was to be able to move and use my arms. If the rest of my body didn’t come back, I could deal with that.

After months of rehabilitation and therapy, I did not make a full recovery. I left the rehabilitation hospital at the University of Wisconsin barely able to push my own wheelchair or dress myself. However, I was determined to get back to school and be with my friends.

It was the mid-1980s before the passage of the Americans with Disabilities Act, and I was told that due to the deficits I had sustained with this second illness I could no longer be a physician. Upon returning to school, I decided to pursue a career as a pharmacist. Getting around on four wheels in the snowy Wisconsin winters proved to be more of a hassle than I wanted to deal with, so I moved 2,000 miles away to finish my studies at the University of Arizona.

I was committed to that team no matter what. I learned the sport, became physically fit and put up with everything the guys threw at me (and literally the balls they threw at me). Taking on the challenge and playing with this team made me a better basketball player and ultimately resulted in being discovered and invited to join a women’s team in Texas.

Being a part of the Texas women’s team led me to my first USA women’s wheelchair basketball tryout. For over 12 years, I made every USA team I tried out for and competed on three medal winning Paralympic teams – 1992, 1996 and 2004. During those years, I also managed to earn my bachelor’s degree in microbiology, chemistry and psychology and my doctor of pharmacy degree.

My story has come full circle from the days of being thankful for my first job with HealthSouth to today, where I’ve enjoyed a nearly 12-year career as the director of pharmacy at Encompass Health Rehabilitation Hospital of East Valley in Mesa, Arizona and the regional director of pharmacy for the company’s west region, all roles that I love.

This work is my mission, not just my job, and I am someone who really cares, just like the healthcare professionals I remember and admired when I was young. What gets me up in the morning? I have the privilege of living and sharing the power of rehabilitation with our patients and teams every day. For me that means going the extra mile by bringing my super-powers of strength, perseverance, passion and compassion to my work.

As I wrap up my story, I want to leave you with:

Dr. Renée Tyree is the pharmacy director at Encompass Health Rehabilitation Hospital of East Valley in Mesa, Arizona as well as the regional director of pharmacy for Encompass Health’s west region, which includes Arizona, California, Colorado, Idaho, Nevada, New Mexico and Utah. A dedicated, results focused and accomplished pharmacy leader, she received her doctor of pharmacy degree from the University of Arizona and her master’s degree in health administration from the University of Cincinnati. Dr. Tyree is a practicing pharmacist with more than 20 years of experience in hospital pharmacy management, building teams and partnering with pharmacists, physicians and hospital leaders to optimize clinical, financial and operational performance. In her position as the regional pharmacy director for Encompass Health’s west region, she creates a culture for success and sets a positive direction for accomplishing clinical and operational initiatives. She received the University of Arizona Pharmacy Practice and Leadership Award for her ability to support teams in delivering leading pharmaceutical care to patients. Dr. Tyree is a former elite Paralympic athlete, having competed in three Paralympic Games on three medal winning basketball teams, she has been a role model not only for other women athletes but for people with disabilities. She is a pioneer in women’s sports and is a disability advocate who serves on the National Board of Directors of the United Spinal Association. Dr. Tyree brings her clinical expertise in pharmaceutical care and rehabilitation medicine, her personal life experiences and passion to Encompass Health.