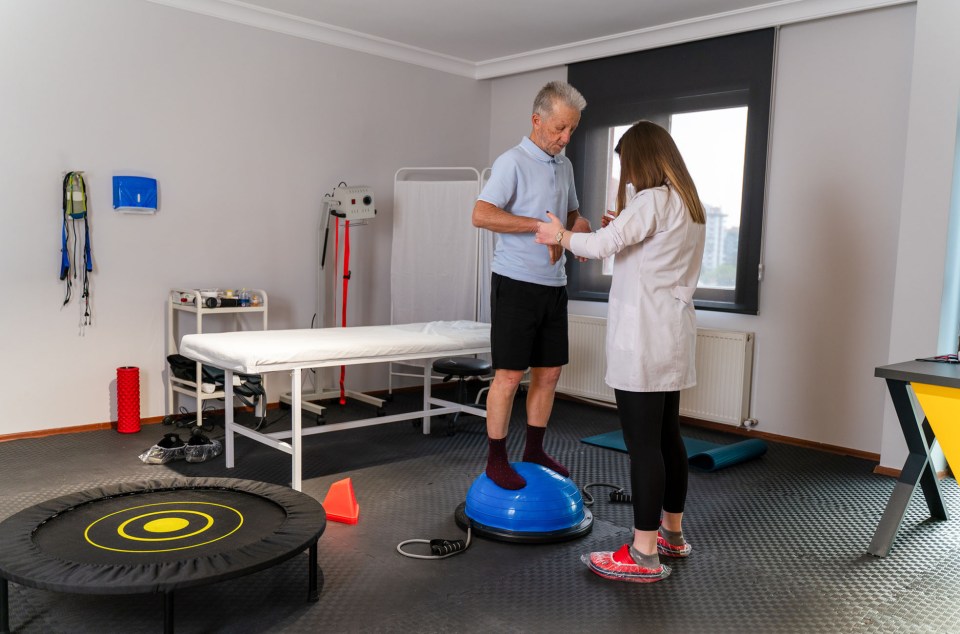 Deep in the brain there are parts called the substantia nigra and the basal ganglia. The nerve cells in the substantia nigra produce a chemical (neurotransmitter) called dopamine. In Parkinson’s, the level of dopamine is substantially reduced. So why is dopamine so important? As you may know, people living with Parkinson’s have slowness of movement—their entire world suddenly becomes smaller. This is because this chemical dopamine is responsible for efficient movement. So, a decrease in dopamine means a decrease in the quality of movement, making everything smaller. This translates to small steps, small handwriting, low quality of voice, freezing or feeling like your foot is stuck to the ground, stiffness and rigidity—all because of the decrease in dopamine in the brain. With Parkinson’s, dopamine levels decrease over time.

Symptoms of Parkinson’s begin to appear when around 80% of the chemical dopamine has been depleted. Imagine that, 80%! That means that several people may have the beginning stages of Parkinson’s but might not even know it for a good six years before their symptoms start to appear.

The classic symptom of Parkinson’s are smaller movements, tremors, rigidity and poor balance. Let’s dig into each of these symptoms to understand them more.

Neural Pathways in the Brain

Dopamine controls movement, and with Parkinson’s dopamine is diminished. So, the neural pathway in the Parkinson’s brain that is used every day is giving a weaker signal to the muscles, resulting in smaller movements. The Parkinson’s brain is giving the muscles the wrong message. The brain is an amazing organ; it can re-wire itself, a principle called neuroplasticity, and new neural connections can be created. Repetition is key in making sure the new neural pathway becomes stronger. The brain needs to train itself to do movements bigger and create a new bigger neural pathway that can be used instead of the one that is giving the wrong smaller messages. Over-exaggerated movements for Parkinson’s patients are equivalent to a normal sized movement. So, bigger movements are better movements. Practice moving big to get that new bigger neural pathway to light up and get stronger.

Detecting and diagnosing Parkinson’s disease in its early stages can allow for greater treatment success and managing symptoms. Unfortunately, there is still no cure for Parkinson’s, but the earlier it is detected, the sooner treatment can start and help improve quality of life. If your neurologist suspects you have Parkinson’s, they may start you on medications that substitute the lost dopamine (example: medications like Carbidopa/Levodopa, dopamine agonists, amantadine, etc.) and see if these medications help with the symptoms. If they do, then your doctor may diagnose you with Parkinson’s. As these dopamine levels now increase, brain function will become better, and a patient may experience fewer symptoms associated with Parkinson’s. Regular checkups with your neurologist are needed because your body may develop a tolerance to the medications and adjustments to dosage or changing medications may be warranted.

Parkinson’s is a progressive disorder, but there are things you can do to help manage the symptoms and slow the progression of the disease.

It is important to have a healthy diet and stay hydrated. Dehydration can cause low blood pressure, which can result in you becoming faint and increase your risk of falling. It is important to drink at least eight 8-ounce glasses of water a day to help prevent constipation. Eating foods rich in Vitamin D and decreasing protein rich foods is also recommended, as they may interfere with the medication effectiveness.

Why is timing of Parkinson’s medication so important? If a person with Parkinson’s disease does not receive their medication on time, it can make the symptoms worse—more tremors, increased rigidity, loss of balance, confusion and difficulty communicating. It also may take a longer time to recover. Have your ever felt like you have times that you perform very well soon after you have taken your Parkinson’s medications, and then you can feel that drug wearing off and your performance is not so great anymore? You are not alone. There is commonly a peak performance period and a wearing off period. Keep a journal and write down every time you have taken your medication. Use a pill box with sections for each day and time. Set alarms so that it can remind you when it is time for your next dose. Try to perform your exercises and activities requiring more effort during your peak performance period.

Exercise is a vital component for people with Parkinson’s disease and it helps maintain balance and improve mobility. High intensity exercises like boxing have shown to be beneficial as it drives brain change. Remember that with Parkinson’s disease, the neurons that produce the chemical neurotransmitter dopamine that helps with movement are damaged, and by the time Parkinson’s symptoms appear there has already been an 80% depletion of these dopamine neurons. New connections need to be made and exercise has been shown effective in creating these new connections in the brain. Exercise regularly to help manage your symptoms of Parkinson’s disease and change your brain. Your physical therapist, occupational therapist and your speech language pathologist will be able to prescribe individualized exercises that are right for you. Studies have shown that exercise helps slow the progression of the disease.

Physical therapists are experts in evaluating and treating musculoskeletal, neurological and cardiovascular disorders. Physical therapists may use different techniques such as exercises, stretches, balance retraining, manual therapy and fall prevention strategies to help restore function and improve movement. They will prescribe you stretches to help with the slouched posture you may be having because of the tightness of your muscles around your shoulders and neck. Your physical therapist will help you walk better and get better balanced and will help you gain confidence in walking with bigger steps. They will remind you to keep using that new neuro pathway and do things bigger so it becomes automatic.

Occupational therapists are experts who use therapeutic techniques to improve, rehabilitate or maintain a person’s ability to perform everyday meaningful activities. “Occupation” refers to the activities that are done from the time you wake up to the time you sleep­—the activities and roles that define who you are, whether they are work tasks, school activities or leisure pursuits. Occupational therapists can assist patients in gaining independence with dressing and grooming tasks and performing everyday tasks in a different way, using adaptive equipment as needed. They can assist with strengthening and stretching as well as making suggestions to modify your environment more efficiently.

Speech therapists or speech language pathologists are experts who work to prevent, assess, diagnose and treat speech, language, thinking skills (cognition) and swallowing disorders. They can help with strategies to improve the vocal quality in Parkinson’s patients. People with Parkinson’s may have trouble getting food to their mouth, have leakage from their mouth, get food stuck in the cheeks or may need extra time chewing. They may have difficulty swallowing or cough easily when drinking water. Your speech language pathologist will teach you techniques for a safer swallow such as tucking in your chin. They may recommend you get swallow tests called Modified Barium Swallow or a FEES test to determine whether the food or liquid is entering your lungs, also known as aspiration. In this case, they may recommend a thickened liquid to prevent aspiration or a modified diet to assist with safe swallowing. They also can use electrical stimulation to re-train your swallowing muscles. Speech therapists can also assist with teaching strategies to improve cognition, problem solving, processing and memory.

Maintaining emotional health is just as important as maintaining your physical health. The entire process of Parkinson’s may be difficult—from the onset of symptoms to the official diagnosis to seeking out treatment. You may be overwhelmed with emotions and feelings of despair, anger, grief, denial and hope. There are support services available in every state. If you visit the Parkinson’s Foundation and type in your zip code, you will be able to view all resources available in your area. You can also visit the American Parkinson Disease Association for more information on Parkinson’s. For example, the Houston Area Parkinson’s Society has group exercise classes, boxing classes, speech classes, support groups and other resources free of charge to people living with Parkinson’s.

Receiving a Parkinson’s diagnosis is hard and can be devastating news. Many times, people will give up once they hear it is a progressive disorder. But there are so many things that can be done to help manage symptoms. In my experience treating people with Parkinson’s, several of them had given up hope and were in despair because they felt like there was not anything they could do to help manage their symptoms. But when they started using these tips, tricks and strategies, they were amazed at how much they could do.

You have the power to help manage your symptoms; your mind is a powerful thing. Do what you can and be proud that you are not giving up. Living with Parkinson’s is possible. One proven thing that slows the progression of the disease is exercise, so instead of being discouraged, get out there and get moving. It may be hard at first, but be consistent, and you will get results.

Read more posts Susha Thomas
director of therapy operations Cypress, Texas
Susha Thomas PT, DPT, C/NDT serves as the director of therapy operations and program chair for Parkinson's at Encompass Health Rehabilitation Hospital of Cypress. Susha is a physical therapist and has specializations in Parkinson's and stroke rehabilitation. She received her doctorate degree in physical therapy from Wayne State University, Michigan and is an active volunteer with the Houston Area Parkinson's Society. She mentors and helps bring awareness to the disease, dispelling stigma while advocating for the Parkinson's community. Her many years of working with Parkinson's patients inspired Susha to jot down her techniques and strategies into a book because she realized there are many out there who have lost all hope. Her book, "Parkinson's Disease—Reclaim Your Life—Tips to Help Manage Your Symptoms," provides strategies for patients and caregivers to improve daily function and quality of life as well as in-depth recommendations on adaptive equipment, exercises and home modifications that can be used to improve independence with daily tasks.