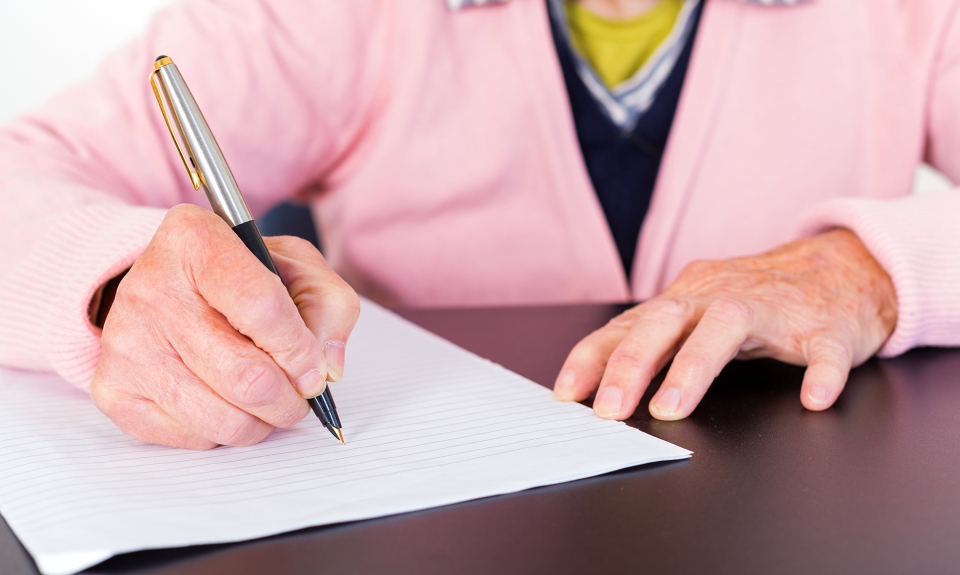 Small handwriting can be one of the early signs of Parkinson’s disease.

Parkinson’s disease is a progressive neurological disorder that affects movement. Parkinson’s early signs can be hard to detect and can go unnoticed. As the disease progresses, it affects all body movements including posture, strength, balance and endurance.

“I would describe Parkinson’s as a disease that affects how someone moves,” said Michael Hammel, a senior physical therapist at Encompass Health Rehabilitation Hospital of Fayetteville. “As you get older, your movement is affected, but with Parkinson’s, it’s accelerated; it’s amplified.”

There is no cure for Parkinson’s at this time. However, there are medications that can slow the progression and ease the symptoms. Therapy and exercise can also help you manage the disease.

Parkinson’s is a nervous system disorder that causes a slow degeneration of nerve cells or neurons in the basal ganglia portion of your brain. This degeneration causes a depletion of dopamine, which is partially responsible for starting a circuit of messages that coordinate movement. This depletion of dopamine is what causes Parkinson’s disease. However, it’s largely unknown why this cell death occurs.

Most people diagnosed with Parkinson’s have no family history of the disease, and by the time Parkinson’s’ early signs and symptoms begin to show, the disease has already progressed.

“You might have small tremors, but you also might notice you have smaller handwriting,” he said. “Some also have a softer or lower voice, and you might have trouble hearing them.”

The Parkinson’s’ Foundation lists the following as the 10 most common early signs of Parkinson’s disease:

Symptoms typically start on one side of the body. As the disease progresses, Parkinson’s symptoms continue to change and become more pronounced, appearing on both sides of the body. Other symptoms include:

How is Parkinson’s Diagnosed?

Your primary care physician can make a diagnosis of Parkinson’s based on your symptoms, but many choose to see a neurologist who specializes in movement disorders. During your examination, your doctor will check for balance and movement issues. To make a Parkinson’s diagnosis, you have to exhibit two of the four symptoms for an extended period of time.

What are the Stages of Parkinson’s?

Every case of Parkinson’s is different and so is the progression of the disease. The disease is typically diagnosed in those who are 60 or older, but there are instances where a diagnosis is made much earlier. The Parkinson’s Foundation recognizes five stages of the disease based on the severity of symptoms.

Parkinson’s early signs and symptoms are mild and don’t interrupt daily routines. Others might not recognize the symptoms in you at this stage. Symptoms will likely only present on one side of your body.

Symptoms begin to progress at this phase with more noticeable tremors and posture and balance issues. At this point in the disease, you may experience difficulty walking or with your posture. Symptoms now are presenting on both sides of the body.

This is considered the middle of the progression. At this stage, balance becomes an issue and falls are a concern. Most are still living independently at this time but may start to have difficulties with everyday tasks, such as eating and dressing.

At this stage, you are no longer able to live independently. Movement is more limited and walking will require assistance.

This is the final progression of Parkinson’s disease and the most debilitating. Most require a wheelchair or are bedridden. Round-the-clock nursing care is needed at this time.

Watch this video from the Parkinson’s Foundation for more on the progression and stages of the disease.

How is Parkinson’s Treated?

While there currently is no cure for Parkinson’s, there are medications that can help slow the progression of the disease. A combination of the prescription drugs Levopoda and Carbidopa are often prescribed to those living with Parkinson’s. These can help reduce tremors and rigidity.

Hammel said any combinations of medications prescribed should be accompanied by an exercise program.

“There are two things that 110% dictate the progression of the disease: the medications your neurologist recommends and physical activity,” he said. “It’s like they say, ‘if you don’t use it you lose it.’ That’s true with movement.”

Research indicates that regular exercise can slow the decline in those with Parkinson’s. Exercise can also save dopamine, Hammel added. Loss of dopamine is what causes the disease in the first place, “so, exercise is huge,” he said.

There are several Parkinson’s exercise programs out there. Check with your doctor to see which one is right for you.

How Can Inpatient Rehabilitation Help?

As a senior physical therapist at Encompass Health Fayetteville, Hammel works with Parkinson’s patients at various stages of the disease. He said inpatient rehabilitation for Parkinson’s can benefit even those who are only experiencing Parkinson’s early signs and symptoms.

“Honestly, I would say the moment you are diagnosed, rehabilitation can help,” he said. “Once you’re diagnosed, one of the best things you can do is therapy. We can help with education and trying to regain independence or modify how you used to do things.”

The goal of rehabilitation for Parkinson’s patients, Hammel added, is to allow you to remain independent at home for as long as possible. If you or a loved one was recently diagnosed with Parkinson’s disease or is experiencing more progressed symptoms, find an Encompass Health location near you, and talk to a rehabilitation specialist to see if inpatient rehabilitation could benefit you.