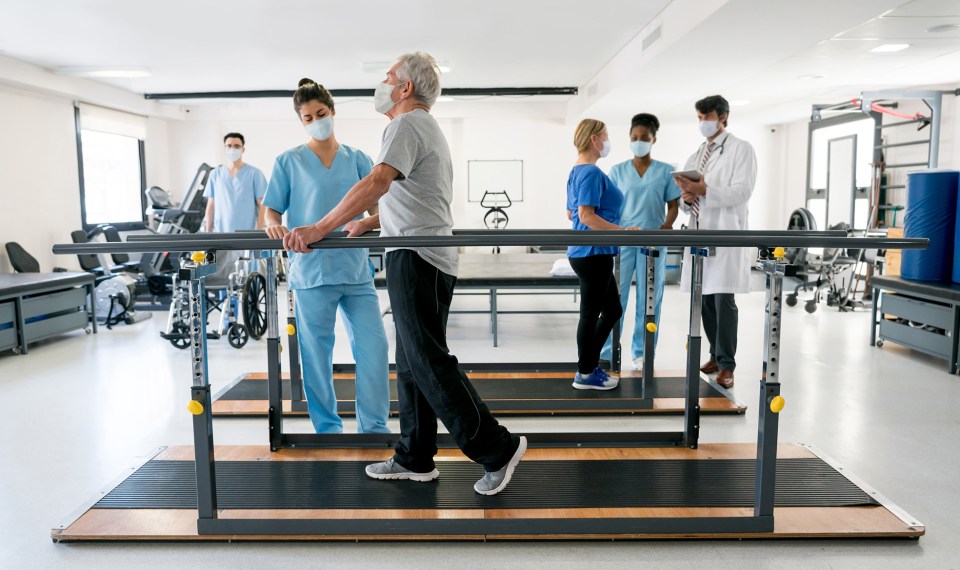 Those with nervous system disorders, such as stroke, Parkinson’s and multiple sclerosis, can often beneft from therapy in an inpatient rehabilitation hospital.

Nerves, or fibers, carry messages to and from the body and the brain. The nervous system is responsible for various body functions including:

Some experts consider headache the most common neurological disorder. Some headaches are classified as secondary headaches indicating they are due to another condition such as sinusitis, hangover, brain tumor, aneurysm, ear infection, high blood pressure and other various conditions.

Primary headaches are those that have no clear underlying cause and include migraine, migraine with aura, cluster headache, tension headache, and trigeminal autonomic cephalalgia.

Parkinson’s disease is a progressive disorder that is thought to be caused by a combination of genetic and environmental factors, although the exact cause is not known. Brain cells in the basal ganglia and substantia nigra are affected.

Surgical treatment of Parkinson’s disease is reserved for patients who have exhausted other treatment options. Some surgical interventions used in the past were aimed at destroying specific areas of the brain to control motor symptoms. These surgeries are rarely used today. Current surgical options include deep brain stimulation to disrupt specific brain signals and Duopa therapy surgery. Duopa is a gel form of carbidopa/levodopa that requires surgical insertion of a tube through the patient’s stomach into the intestine. The tube is connected to an external pump that administers the medication.

Research is ongoing for the treatment of Parkinson’s Disease including experimental stem cell therapy.

Multiple sclerosis occurs when the body’s own immune system attacks the central nervous system – the brain and spinal cord. Inflammation of the nerve fibers and the myelin sheath (a protective coating that covers the nerves) causes damage, disrupting or blocking signals from the nerves to various parts of the body, which causes the symptoms of MS. The exact cause of multiple sclerosis is unknown, but the chronic disease may be due to a combination of factors including genetics, immune system defects, infections or environmental causes.

Symptoms vary greatly and are not the same for everyone. Patients often experience fluctuations and changes in symptoms, which may come and go for days, weeks or years. MS can affect all areas of the body but common symptoms include:

Treatment of MS is aimed at managing symptoms. Medications such as Interferon, Glatiramer acetate, monoclonal antibodies and chemotherapy drugs may all be helpful in decreasing symptom frequency, lessening exacerbations and treating increasing symptoms. Intravenous glucocorticoids – steroids – may be administered to reduce the severity of new or recurring attacks, followed by a course of steroid pills. Adrenocorticotropic hormone (ACTH) gel and plasmapheresis, a “blood-cleansing procedure,” are additional treatment options. An inpatient rehabilitation program that includes physical, occupational and speech therapies is also beneficial in maintaining or improving function and quality of life.

Guillain-Barre´ is an autoimmune disorder, meaning the body’s own immune system attacks the peripheral nervous system (the nerves outside the brain and spinal cord). Cases range from mild and brief to severe, causing paralysis and the inability to breathe independently. GBS typically occurs after a viral or bacterial infection and occasionally is triggered by surgery. Guillain-Barre is seen in those of all ages and occurs with equal frequency in both men and women. Most patients recover fully from GBS and even those with severe symptoms recover most of their ability.

Symptoms of GBS often start with numbness and tingling in the hands and feet. Weakness is a key symptom and patients may have difficulty walking or climbing steps. Other symptoms include:

Treatment of Guillain-Barre involves therapies to lessen the severity of symptoms and speed recovery. Since symptoms can progress rapidly, prompt treatment is required. Two treatment methods are commonly used.

Guillain-Barre patients are usually transferred from acute care to an inpatient rehabilitation hospital where they receive three hours of therapy a day, five days a week to help them regain strength and resume activities of daily living before returning home.

Symptoms of stroke should send patients to the nearest hospital because immediate medical care can help prevent extensive or permanent damage. The acronym, F.A.S.T., is used to identify stroke symptoms.

Other stroke symptoms depending on the area of the brain where the stroke occurred include:

Treatment of stroke depends on the type of stroke. Immediate treatment is vital in reducing disability and improving recovery outlook. It is imperative that patients with stroke symptoms seek immediate medical care. Treatment options include:

The above conditions are just a few of the hundreds of neurological disorders. Diagnosis is critical in identifying the disorder and determining the proper treatment.