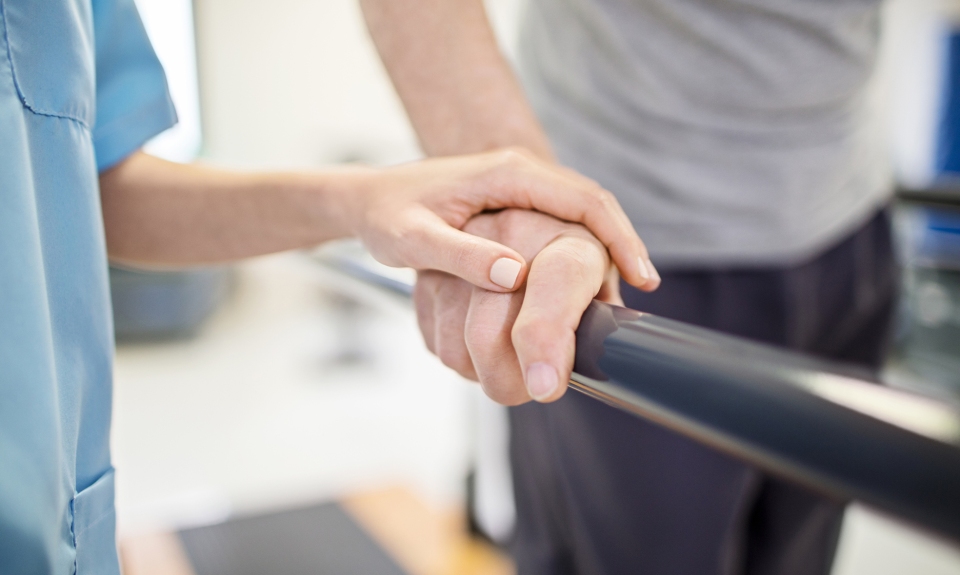 Guillain Barré (gheé-yan bay-ray) syndrome, or GBS, is a rare disorder that occurs when the body’s own immune system attacks the peripheral nervous system, which is the nerve network located outside the brain and spinal cord. Nerve fibers, also known as axons, are protected by a fatty covering called the myelin sheath, much like the covering wrapped around the wires of an electrical cord. Damage to the myelin sheath disrupts nerve signals to the brain, causing muscle movement problems and sensory loss and leading to muscle weakness. When the axon itself is damaged, symptoms are more serious. Fortunately, most people who have GBS, both mild and severe, recover over time.

“Patients with mild cases typically regain full function, although some may experience sensory loss or neuropathy in their hands or feet permanently,” said Stacey Hodges, Director of Therapy Operations at University of Iowa Health Network Rehabilitation Hospital, a venture with Encompass Health in Coralville, Iowa.

What are the Symptoms of GBS?

Symptoms in Guillain Barré usually present quickly, sometimes within hours, and progress over a period of about three weeks. Weakness and tingling in the legs are often the first signs, later spreading to the arms and body. Most people seek medical care when they begin to have difficulty walking.

Unlike some other neurological disorders, muscle weakness in GBS almost always occurs equally on both sides of the body. Symptoms typically worsen during the first two to three weeks before reaching a peak. Days, or even several weeks after peaking, patients start to improve.

Depending on the severity of the disorder, symptoms may include:

Who is at Risk for GBS?

Anyone, from children to adults, can get GBS, but it is more common in adults over the age of 50. Symptoms often appear around three weeks after an individual has a respiratory or gastrointestinal infection. The exact cause is unknown, but the condition is associated with certain bacteria and viruses. According to the CDC, campylobacter jejuni bacteria is responsible for as many as 40% of Guillain Barré cases in the United States. Haemophilus influenzae bacteria has also been associated with the syndrome, along with several viruses. Rarely, GBS is triggered by surgery or certain vaccines.

How is Guillain Barré Treated?

Serious cases can be life-threatening. It is important to seek medical treatment as soon as possible to lessen symptoms and address possible breathing problems or changes in heart rate or blood pressure. Early medical care can improve patient outcomes.

There is no cure for GBS, but plasmapheresis has been found to diminish symptoms. In this procedure, the liquid portion (plasma) of a patient’s blood is separated from the blood cells and treated to remove the antibodies that are attacking the immune system. The plasma is then returned to the body through an intravenous infusion (IV). The affected plasma may also simply be removed and replaced with a solution.

Intravenous immunoglobulin (IVIG) infusions are another treatment used to reduce the body’s harmful immune response. IVIG relies on antibodies, which are proteins made by the body to help fight infections. A very concentrated mixture of antibodies is gathered from thousands of blood donors and given to the patient via an IV transfusion.

During the acute phase of GBS, patients may require assistance with frequent turning and range of motion activities to prevent blood clots and bedsores. Careful monitoring and support of breathing and heart rate is also necessary. Depending on a patient’s limitations, nutritional support may be needed along with assistance in eating or swallowing. Comfort measures and pain control are also key. Although medical support is the focus during this phase, physical therapy should be started as soon as possible to keep joints movable and prevent the muscles from contracting.

How Inpatient Rehabilitation Can Help

Once a patient is medically stable, inpatient rehabilitation is vital in controlling pain, rebuilding function and mobility, increasing strength, improving balance and preventing injury. Fatigue is common in GBS, so it is important to tailor exercise and therapies to the individual. Rehabilitative therapy helps patients achieve optimal muscle use and adapt to limitations, but it doesn’t speed nerve repair.

“Nerves only regenerate at a rate of one millimeter per day,” Hodges said. “Once the nerve is myelinated and the muscle begins to fire, we promote appropriate strengthening. You can’t overwork Guillain Barré patients. It is important to allow rest alternating with higher activity to build strength.”

Every patient progresses at a different rate during recovery. Activity should be increased gradually using supportive measures and avoiding fatigue. Rehabilitation is focused on returning patients to daily activities, but frequent rest breaks are needed. Most patients show a gradual improvement, but Hodges points out, some do lose ground at times during the rehabilitation process.

“Therapists need to test strength frequently, every four days to weekly, to make sure the patient is not regressing,” Hodges said.

How Long Does It Take to Recover?

Recovery time ranges from weeks to years. But, with time, the majority of patients recover completely or almost completely. An estimated 20% of patients have sensory changes in the hands and feet or continuing weakness after three years. Less than 15% experience significant long-term disability. In rare cases, symptoms reappear. Individuals with this type of chronic GBS may require additional rehabilitative therapy to address problems as they develop.

The physical and emotional impact of GBS is challenging. Many patients struggle with psychological distress and depression. Addressing these side effects is an important part of rehabilitation.

“I tell patients that they have to be advocates for themselves,” Hodges said. “It is easy for patients to lose their independence with people telling them what to do all the time. They need to be their own bus driver and tell others how they want things done.”

For information on the role of rehabilitation in the recovery of GBS, find an Encompass Health location near you and speak to one of our rehabilitation specialist.