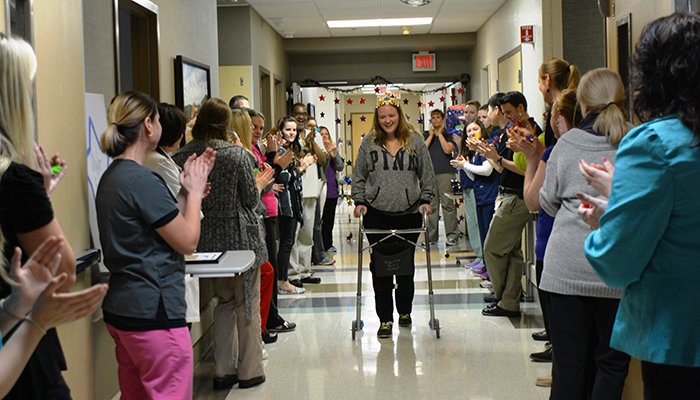 This Missouri teen vowed to get her independence back after a wreck left her paralyzed from the shoulders down.

The Fourth of July weekend in 2015 was supposed to be a simple, low key affair for Milan, Missouri, resident Skyler Gray. However, that holiday weekend would change her life forever – both physically and in its overall trajectory.

On July 5, 2015, Skyler was involved in a motor vehicle accident. Upon waking at Mercy Hospital in Des Moines, Iowa, her first thoughts were not that of self-pity, but of immediate determination that has propelled her through multiple surgeries and six stays at Rusk Rehabilitation Center in a quest to regain the independence the accident took.

“I knew I wasn’t going to be as bad as they said I was going to be because I was too stubborn to let that happen,” she laughed. “But, I did not think I would be where I am. I never had one of those moments where I was like, ‘Oh my gosh, I feel so bad for myself, how could this happen?’ It was more of, ‘OK, now what? What do I need to do?”

When she was ejected from the truck she was riding in that July night, Skyler suffered two fractured vertebrae in the cervical area of her spine, a broken clavicle and was paralyzed from the shoulders down. During her first stay at Rusk Rehabilitation Center, a seemingly small movement – she moved her thumb – proved that her determination would bring more progress than ever expected.

“I instantly was crying,” Skyler said. “It changed everything for me because up until then, I hadn’t had any movement, and all of a sudden my thumb started working. I knew it was the beginning. That little thumb wiggling back and forth proved to me that I can do more than they said I was going to be able to.”

Over the course of two years, Skyler went from no movement in her lower extremities to walking out of the rehabilitation hospital on her own. She couldn’t have done it without her therapy team, she said, specifically Bobbi Arp, physical therapist, and Jenny DeShon, occupational therapist.

The seemingly simple skills she was able to master in occupational therapy often carried the largest personal rewards.

Currently, Skyler is working to re-master that skill as a cyst in her spine has hindered movement in her arms. As she prepares for another potential surgery and subsequent visit to Rusk Rehabilitation Center, she said she knows she will once again be in good hands. Those hands, Skyler said, have not only molded her physical recovery, but her future career as well. One day, Skyler hopes to become an occupational therapy assistant and impact other lives the way this Encompass Health hospital has impacted hers.

“I hope to give others the same feeling I got the first time I wrote my name or brushed my own teeth – those simple things that you don’t think you are going to be able to do again,” she said. “It’s the very simple things that mean so much when you don’t think you’ll ever be able to do again, and I want to help others have that feeling. Writing the alphabet for the first time – it looked terrible – but it was the start of a whole new world for me. I want to help others have that joy I felt when I achieved that again.”