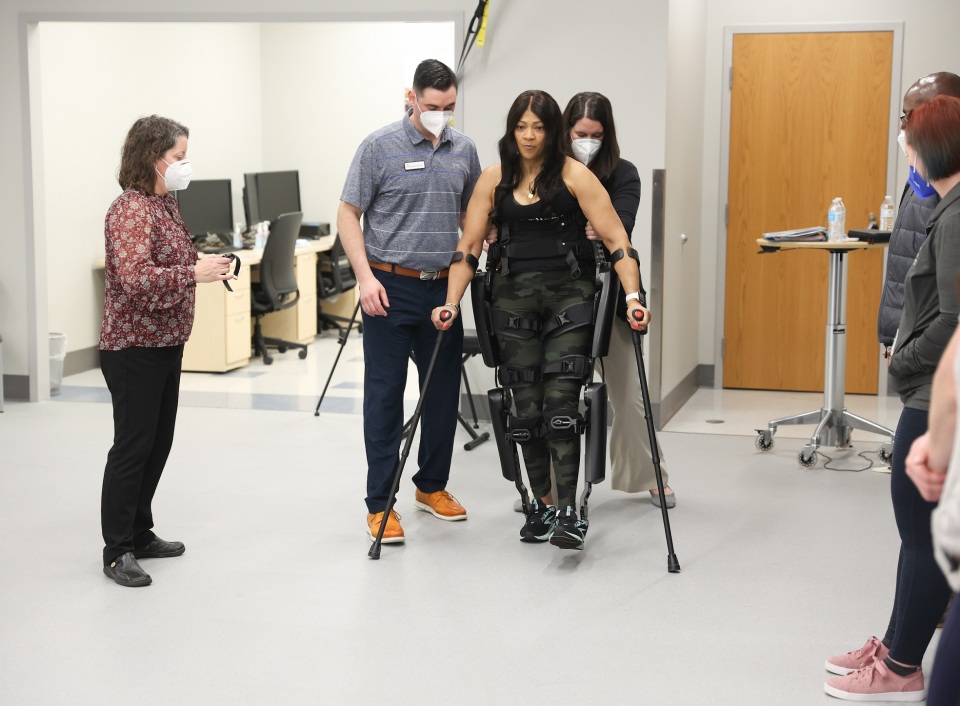 In August 2013, April Ballentine was enjoying an evening out with friends when her ex-boyfriend showed up brandishing a gun. As he aimed at her head, Ballentine was able to block his first shot. Then everything went black. He shot her five times at close range. She recalls waking up for a brief moment hearing sirens wailing in the background before everything went black again. When she woke up the second time, she was at University of Kentucky Albert B. Chandler Hospital in Lexington, KY. The trauma team stopped the bleeding and saved her life, but Ballintine sustained a T4 spinal cord injury, leaving her paralyzed from the chest down.

After weeks in ICU, Ballentine was discharged to Cardinal Hill Rehabilitation Hospital for inpatient rehabilitation. During her 90-stay, Ballentine worked with a team of therapists to recover and adjust to her life with limited mobility. At times during her therapy, she would try to stand holding herself up with her arms. It took everything in her body to do it. “I recall trying to push myself up, and it almost seemed impossible. That dream was shot really easily,” Ballentine said. But she kept pushing, refusing to let her spinal cord injury keep her from happiness. Her therapists at Cardinal Hill created a plan for Ballentine that helped her adjust to using a wheelchair and care for herself.

During rehabilitation, a company called ReWalk reached out to Ballentine about its exoskeleton—a wearable piece of technology that allows patients to stand up and walk with the support of a full-body brace and robotic legs. The company was looking to start a program in Lexington. Ballentine shared the information with her contacts at Cardinal Hill, not thinking much of it. That would later change.

After discharge, Ballentine continued her therapy at Cardinal Hill’s outpatient clinic, making friends and a big impact along the way. Knowing she needed to take better care of herself, Ballentine changed her lifestyle. She started working out with a trainer to build upper-body and core strength and overhaul her diet. She lost 180 pounds over the course of two years. It’s hard to believe, but that tremendous weight loss was just one of Ballentine’s notable accomplishments since her spinal cord injury.

Over the next few years, Ballentine became well-known in her community for her giving spirit. She advocated on behalf of domestic violence victims, eventually catching the attention of the Fayette County Sheriff’s Office. The sheriff asked her to work for the department as an advocate, sharing her story to more people and connecting victims to resources.

Serving as a Mock Patient

She also started volunteering as a mock patient for physical therapy students at University of Kentucky. With that work, students learn how to best care for patients with similar injuries. “The students check for reflex, flexibility and strength around the injury and they question you about your activity level and much more,” Ballentine explained.

University of Kentucky associate professor Denise O’Dell took a group of patients to work with Ballentine, beginning a series of events that would lead to a history-making event. “I could see the drive that she has to give back to society, to better herself, to stay engaged,” O’Dell said. “Given my background and having worked with a lot of individuals with spinal cord injury, I saw sparks there that I hadn’t seen in others for quite some time.” That gave O’Dell an idea.

In a previous job, O’Dell had been part of a team that helped evaluate and train patients following spinal cord injury, including evaluations for standing using an exoskeleton, the technology Ballentine heard about earlier on in her therapy. She saw Ballentine’s strength and was determined to connect Ballentine with ReWalk to be fitted for an exoskeleton. She made some calls to her colleagues at UK HealthCare and the College of Health Sciences and contacted ReWalk to come up with a plan for April to try an exoskeleton device.

Making History with her First Steps

In March 2022, a crowd gathered at University of Kentucky’s Sports Medicine Research Institute, where Ballentine would take her first steps with an exoskeleton—nine years after she was paralyzed. With a team of doctors (including the trauma doctor who helped save her life), therapists and loved ones standing by, Ballentine pushed into the crutches and brought herself up to a full standing position. From there the therapists guided her through the things she would need to do to move her body—hold a neutral standing position, shift her weight laterally, pivot, and finally, walk.

The audience cleared a path and after a brief pause to recalibrate the machine, Ballentine took off, walking clear across the room. “It’s very difficult to find the words of how it truly feels, because when you’ve defeated death, I don’t know if they are other words other than prayer, blessings and thankfulness,” Ballentine said.

April continues outpatient therapy at Cardinal Hill twice a week with Ivanchak. They’ve both learned a lot since March. For starters, strapping herself into and out of the exoskeleton takes time and strength, but the pair is getting more efficient with each session. “Every walk is a new walk, but I’m able to transfer in and out of the suit. I can secure and buckle myself into the suit, as well as come out of the suit,” Ballentine said.

In earlier sessions, Ballentine and Ivanchak focused on proper form and good posture. They’ve advanced to learning how to lean side to side and use crutches so Ballentine’s gait is more efficient and balanced. “It’s definitely a process. We have to sync together to make it possible because if we can’t connect, it’s harder. My walk is improving and getting better at each visit.”

While insurance does cover therapy with the exoskeleton at Cardinal Hill, it doesn’t cover the cost of the device itself. “I had to raise $30,000 to get it here, just for therapy,” she said. With the community’s support and work with a non-profit, Ballentine successfully raised the $30,000, but there’s more work to be done. “I have to raise another $30,000 for me to own the used one. If I raise $120,000 I’ll get a brand new one.” She is undeterred and continues to raise money for the life-changing device and pave the way for others to have access to the technology. “I’m creating a path here in the state of Kentucky as the first time user of a ReWalk™ Personal 6.0 Exoskeleton and I want to make that possible for others that have experienced unfortunate situations and lost their mobility. It’s history in the making and a new way of life for many.”

Ballentine continues to work part-time at the Fayette County Sheriff’s Office as an advocate and to volunteer as a mock patient at University of Kentucky. She also works full-time in customer service for NuMotion. A few years ago she bought her own home, where she lives with her dogs. She is determined to walk her daughter down the aisle at her November wedding. “To defeat death and be able to continue life is just the upmost. God graced me with being able to live through that and overcome that. I’ve removed “dis” from my ability because I’m able with a creative and adaptive mind. It’s not easy, trust me, but it’s possible to live a happy, full life.”

Rehabilitation for the Real World

Learn how our innovative technologies are helping patients get back to what matters most.