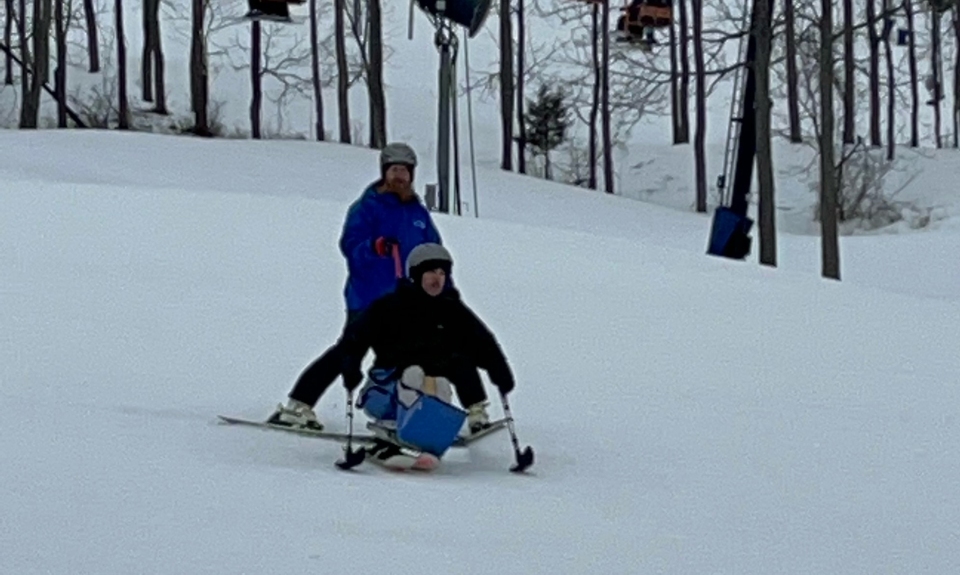 A rare condition caused Don Sumner to be paralyzed, but he is finding adaptive ways to enjoy activities he loved prior to the rupture in his spine.

Two years ago, Don Sumner would have thought nothing of walking 180 steps, but a lot has changed since then.

A rare condition left Sumner paralyzed from the waist down in November of 2019. He said new technology, along with his care team at Encompass Health Rehabilitation Hospital of Cincinnati, are helping him get back on his feet again—and so much more.

“It felt so normal to be upright again,” said Sumner of the first time he used eksoBIONICS, a robotic device that helps retrain the muscles to walk. “Nobody realized how tall I really was. I’m 6′ 2″. The technology is amazing, and my care team is great. They’re helping me get back to as much normalcy as possible.”

During the past two years, Sumner has received both inpatient and outpatient care at Encompass Health Cincinnati. He’s learning to adapt to a new way of living, but Sumner will be the first to say that it’s been a difficult road to recovery.

Sumner is a former FedEx driver, and for 20-plus years, he walked nearly 10 miles a day on his route in downtown Cincinnati delivering packages. Then one day in late 2019, he collapsed while getting ready for work.

“I was getting up, and I didn’t feel well,” Sumner recalled. “I thought I was having a heart attack or possibly a stroke.”

Sumner was rushed to the hospital. Numerous tests revealed he didn’t have either. Instead, they discovered he had a rare condition known as cavernous malformation. The rare disorder can lead to clotting in the blood vessels of the spinal cord. It is a congenital birth defect that Sumner has had since birth, but he didn’t know it until a clot formed and later ruptured.

He underwent surgery to remove the clots, but the damage was already done. The pressure the clots put on Sumner’s spinal cord caused nerve damage, leaving him with what is classified as an incomplete spinal cord injury.

“It’s called incomplete because there is no tear or crush,” he said. “My spine is fully intact, and I have full sensation, just no mobility. It’s kind of an anomaly. Doctors originally told me in a year’s time I’d be back to normal, but I’m learning you can’t put a timeline on these kinds of things. All spinal cord injuries are different, and nerve regeneration is a very slow process.”

Getting Back to the Basics

From the beginning, Sumner’s main goal has been to walk again, but he also wants to get back as much “normalcy” as possible. He also wants to be able to care for himself independently.

“You can’t really comprehend the severity of something like this,” he said. “This has been life changing for myself and my family. They don’t have paraplegia 101 when you leave the hospital.”

That’s where his care team at Encompass Health Cincinnati stepped in. His therapists have helped Don regain control of his life. They helped him perform basic activities of daily living in new ways that accommodated his current abilities.

Kari Hellman, Sumner’s occupational therapist, said that from day one, he was determined to regain some of his independence and help his family.

“From the day I met Don, he was always a ‘take his life into his own hands’ type of guy,” she said. “He was hungry for knowledge from us on how to get better whether it be learning new transfer skills, strengthening, positioning in bed or learning more about bowel and bladder. Don always had his family in mind and wanted to learn how to be the best partner and father from a wheelchair level. He has kept a positive attitude throughout, even when it has been extremely challenging.”

His care team helped him with bowel training, lower body dressing and showering. He can now get in and out of his chair with little to no assistance instead of using a Hoyer lift.

Technologies such as the ekso are helping Sumner achieve his main goal of walking again. The first time he used the robotic device, he walked 180 steps. Just recently he was able to walk 850 steps with the machine doing only 60% of the assist.

Sumner admits that since that first blood clot rupture in late 2019, he’s had some dark days, but he added, he’s not a quitter.

He’s now needing less daily assistance. He has no more daily nursing care, and in June he was able to regain even more of his independence by purchasing a handicap van that he is now driving with hand controls. Sumner is also starting to explore adaptive sports. To date he has participated in downhill snow skiing, sled hockey and, more recently, kayaking. In the coming months he intends to try rock climbing, mountain biking and possibly waterskiing.

“He has tried new adaptive sports, which I have loved seeing as he grins ear to ear when he is participating,” Hellman said. “It was so awesome to see his son and him play sled hockey together.”

Sumner, who’s known by most in his neighborhood as the FedEx guy, has also become part of a spinal cord peer mentor program called Roll-On Cincinnati, where he has formed friendships not only with his Encompass Health therapists but other local people with spinal cord injury as a way to connect people in the Cincinnati area in similar situations.

“I’ve really become great friends with all of them. We text, share accomplishments, or just check in with one another. I am even looking forward to attending two of my therapists’ upcoming weddings,” he said. “I thank God everyday they were put in my path to work with. They are very passionate about their jobs and what they do, and I needed that. They were all game changers.”

Christie Mauch, one of Sumner’s physical therapists, said she is thankful she got to work with Sumner.

“Don is the perfect example of how to turn a tough situation into something inspirational,” she said. “During his time in rehab, he was faced with numerous challenges including pain and hypotension, which challenged him even further, but he never let that define him. I am still so inspired when he sends me videos of him continuing to push himself walking in outpatient therapy!”