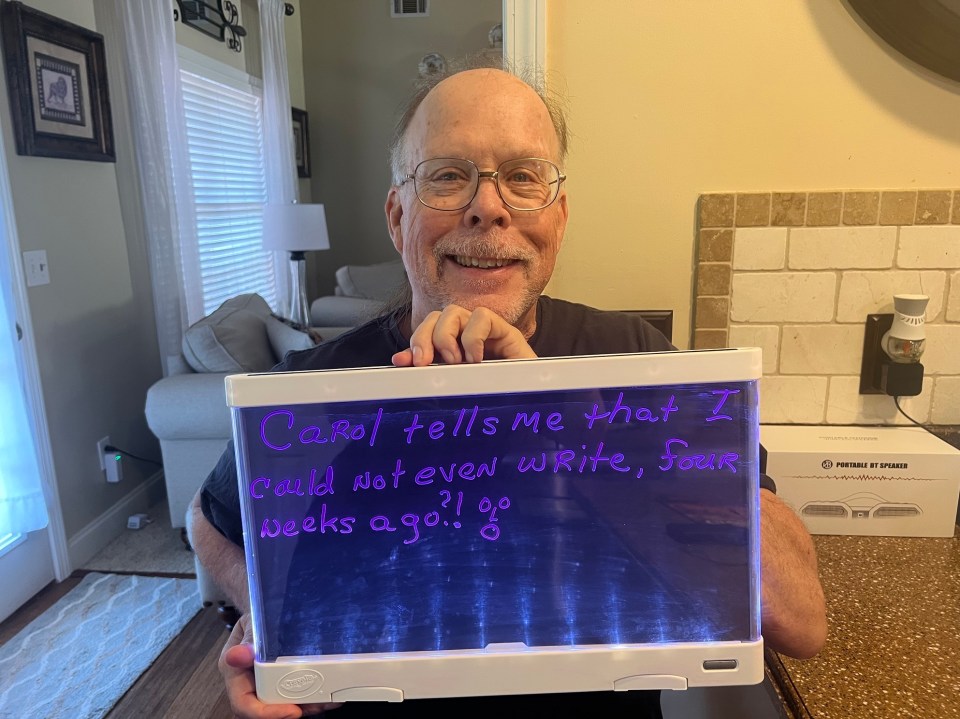 David Close was returning home from playing a gig with his band when he became ill and lost his vision. He and his wife Carol went to the hospital, where tests revealed David had a stroke. Caused by a disruption in blood flow to the brain, stroke affects patients differently. In David’s case, the stroke significantly diminished his vision. His short-term memory and swallowing abilities were also impacted and he struggled with his balance.

In his condition, David was unable to work and participate in his hobbies—woodworking in his home shop and playing rock music in his rock cover band Midnite Cruzer.

Turning to the Experts

Like many patients after a serious illness or injury, David and Carol grappled with uncertainty. Presented with options from David’s doctor, the couple had to decide where David would go for rehabilitation. “We were clueless how to move forward,” Carol said. Thankfully, they had an expert in the family. Carol’s daughter-in-law is a physical therapist working in the rehabilitation field and recommended Encompass Health Rehabilitation Hospital of Henry in Georgia. Carol and David took her advice.

When David arrived at Encompass Health, he required assistance to walk and perform his activities of daily living such as getting dressed, brushing his teeth and getting to and from bed. His struggles were exacerbated by compromised vision and cognitive function. David’s stroke also resulted in dysphagia, a common complication of stroke that affects a person’s ability to swallow. David was limited on what he could eat and was determined to enjoy regular meals again.

At Encompass Health, patients participate in three hours of therapy five days a week, including occupational, physical and speech therapy, to reach each patient’s individual goals and ultimately return home as independent as possible. For David, that meant walking and balancing on his own and improving his vision, so he could get back to work, woodworking and of course, playing bass guitar. His team of therapists, along with his case manager and rehabilitation physician, developed David’s care plan to do just that, and his recovery began.

David credits his daily exercise and brain-stimulating conversations in the therapy gym with helping him regain his independence. “The therapists always engaged me. They asked me to look at them and focus on them and answer their questions, always in a nice way. They were trying to have me focus and understand what was going on and what was being asked. I always looked forward to going to the gym and walking,” David said. As David’s cognition improved, he moved around easier and was able to better care for his daily needs. Carol was with David every step of the way. The couple often walked the halls before and after therapy sessions for extra practice and bonding. “Encompass Health gave him a path forward. It’s really that simple. They gave him hope,” Carol said.

In speech therapy, he worked closely with his therapist to understand and overcome his swallowing complications. “My speech therapist explained why I couldn’t swallow, because I had no idea. She explained to me the muscle between the swallowing and the brain and educated me a lot.” During his stay, his ability to swallow improved and he was able to slowly transition back to a regular diet.

After an 11-day stay, David was well enough to return home to continue his recovery. “Don’t get me wrong, I really grew to enjoy Encompass Health and the folks there. But as much as I enjoyed it there, I was looking forward to being home and getting back into life.”

David’s vision is returning slowly and Carol makes sure he keeps up with activities that stimulate his brain and improve his mobility, using guidance from David’s therapists. “I tap into what I learned from Encompass Health to help him continue moving forward,” Carol said.

For example, David continues to rebuild his strength and stamina by doing waist pivots, leg lifts and riding his indoor bike. Carol and David also work on exercises to improve his vision, including reading flash cards and practicing switching from focusing on an object in the distance to an object closer to him. “I just have to be patient which is not one of my strong suits, but being home is such a benefit for me personally because I can go down to my shop, workout.” Another benefit to returning home: “My wife is a world-class cook. I can eat pretty much anything now!”

Eager to perform on stage again, David continues to play guitar and sing along to his favorite tunes on YouTube. Recently, his bandmates from Midnite Cruzer visited his home for a much-needed jam session. David also looks forward to returning to his packaging engineering role.

The Next Step in Recovery

As leaders in inpatient rehabilitation, our stroke experts help patients like David get back to their passions.