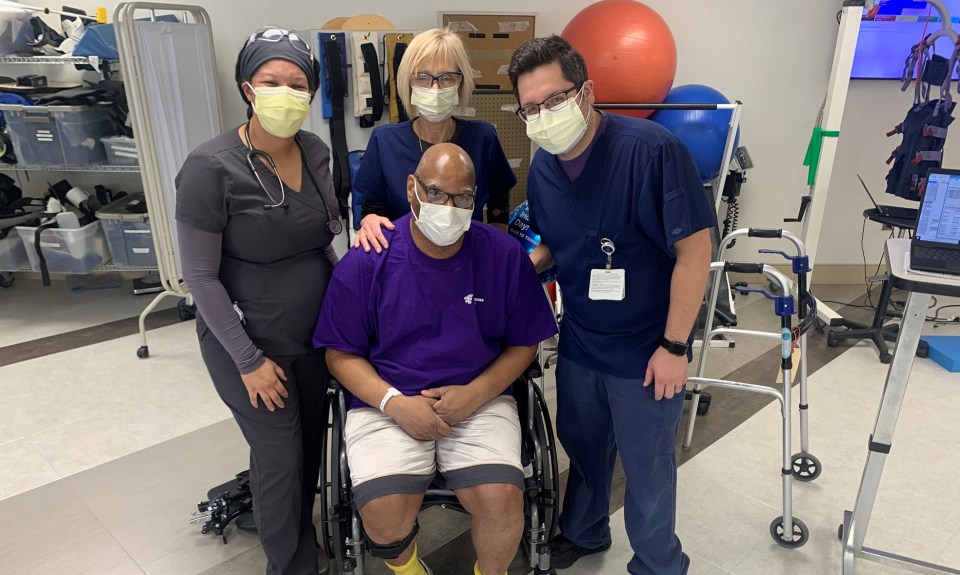 When Milton White arrived at Encompass Health Rehabilitation Hospital of Vineland in New Jersey, he knew he had a difficult road ahead. He was admitted after having a stroke, but he also had several other preexisting conditions that would affect his rehabilitation.

White has a rare lung disease called sarcoidosis, neuropathy, Parkinson’s disease and is legally blind. “With a stroke on top of that, staff had a challenge on their hands,” White said. He had a lot to overcome, including memory loss and difficulty performing activities of daily living (ADLs).

During his stay, White made a lot of progress improving his memory and mobility with the help of his therapists. Inspired by the empathy and determination of his expert care team, White wrote a poem to share with them. The poem ends with a message of gratitude.

“Thank God for Encompass Health, for all you do, I’m doing better because of you.”

During inpatient rehabilitation, his expert care team customized a rehabilitation plan that would help him improve his quality of life. With each small improvement, White’s confidence grew. White worked with his occupational therapist Ronald Lee to relearn how to safely complete everyday tasks such as getting out of bed, showering and brushing his teeth. “Those are little things people take for granted,” White said. “I took them for granted, and I had to learn how to do them at home.”

White also spent time sharpening his memory. Nurses and therapists would give him information like addresses and names and then ask him to repeat the information later in the day. In his poem, White addressed this aspect of his rehabilitation. “Now I’m not good at remembering names, but I’ll do my best just the same. Alison and Grace quickly took aim. They helped me daily strengthen my brain,” he wrote.

Getting Back to Grace

According to White, his most difficult challenge was physical therapy. He knew he had to try his best, because he had big plans! He and his wife Grace are celebrating their 35th anniversary this summer, and White wants to dance with his wife to her favorite song, “Wonderful Tonight” by Eric Clapton. That’s where Trish Clark, a physical therapist assistant, came in. White said Trish Clark was firm but empathetic as she worked with him daily to increase his stamina and independence. “She wouldn’t let me quit. Trish got tough with me when I needed it,” White said. With time, he was able to walk longer distances and exercise on the recumbent bike for longer periods of time. “Each day I would go for more minutes and I thought, ‘Wow, I really can do this!'”

In White’s poem about Encompass Health, he wrote, “Then there’s my favorite loving dish, a tough physical therapist [assistant] named Trish. An assortment of workouts she would mix, because you’ll never miss a workout on Trish’s shift.”

After three weeks of inpatient rehabilitation, White left Encompass Health Vineland to return home where he continues to get stronger and work on his slow dance moves. His therapists and nurses were excited to see him off to his next chapter, even though they miss him. “Milton was one of those patients you never forget,” Lee said. “Not only was he an amazing patient, he was an amazing person, always having a funny story to tell.”

He’s stayed in touch with staff and recently shared a photo with the hospital. White said it’s a special photo because it captured the moment after he was able to walk up and down the stairs to his church to attend services with Grace. “A friend took a picture because it’s an important milestone for me,” he said.