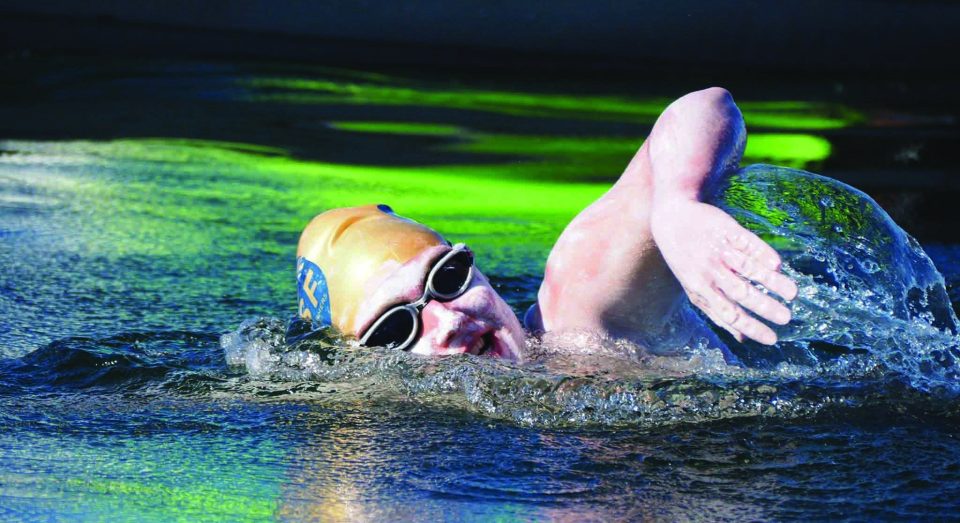 Breaking records is nothing new to Thomas, who has been completing long-distance swims for years. Below, Thomas shared how she prepared for a record-breaking swim across Lake Powell two years ago.

About halfway through her swim, Sarah Thomas was ready to give up. She was hungry, and she was so tired.

“I kept thinking, ‘I’m exhausted. How am I going to get through this all over again? I’m barely halfway there,’” the Denver, Colorado, resident recalled.

Completing the remaining 40 miles seemed impossible. Then, she thought of her friends and family pulling for her and all the hard work she had done. Stroke by stroke, Thomas kept going, and two and a half days after starting that Oct. 4 swim on Lake Powell, she completed her 80-mile goal, likely setting a world record in the process.

At 4:26 p.m. Oct. 6, Thomas emerged from her marathon swim exhausted, but a champion. In all, it took her 56 hours and five minutes. Her swim has been submitted to the Marathon Swimmers Federation to ratify the record, but Sarah feels sure it will be. Prior to her swim, the longest marathon swim on record was just over 78 miles.

However, her Lake Powell swim wasn’t just about setting a record; she wanted to prove she could do it, and she picked up some fanfare along the way.

“For me, this was about achieving a personal goal and seeing how far I could swim,” Thomas said. “Somewhere during the swim, my crew started telling me about the people following me via the GPS tracker. At the start of my third morning, they told me so many people were logged on, the server crashed.”

Thomas said classrooms full of children, friends and strangers messaged her with kind and encouraging words, with mothers calling her a role model for their young daughters.

“You never know how you’re impacting someone,” she said. “If I inspired one little girl to be tough and follow a dream, I did my job. I honestly had no idea how many people cared. I am glad that I inspired others, but that was one thing I wasn’t prepared for.”

She was prepared for that marathon swim on Lake Powell, which straddles the boarders of Utah and Arizona, though. The 34 year old has been practicing nearly all her life.

Thomas, a swimmer since she can remember, jokes that she was born in May, and her parents “threw her in the pool that summer.” She officially joined a swim team at age 6 and began swimming year-round at age 10, continuing the sport through high school and college, and eventually joining an adult team after graduating.

“I never entertained the idea of competing in the Olympics, since my strength is distance and not speed,” Thomas said. “I did my first open water race at 25. When I was 26 – in 2008 – that’s when they added marathon swimming. Had I been younger, I probably would’ve gone for it.”

She later proved she didn’t need the Olympic Games – where a marathon swim is defined as 6.2 miles – to accomplish something truly amazing.

“My close friend, Craig Lenning, really got me into marathon swimming,” she said. “He is a former Marine, and we met while he was training for a marathon swim. It was he who inspired me to believe I could train for one, too.”

Working backwards to allow ample time to train and achieve her goals, Thomas began training for her own marathon swim across Lake Powell in March. She swam four to five times a week for an hour and a half each session and built up from there.

“I was able to weave my training into my daily schedule but found it necessary to take advantage of every second,” Thomas said. “If I left work at 5 p.m., I could start swimming at 6 p.m. before the pool closed at 8:30 p.m. It made for late evenings, but I found I could feasibly squeeze in three hours of training on weekdays and make up for it on the weekends.”

A 10-hour swim on the weekend wasn’t uncommon during her training period, and sometimes, she would train both before and after work on weekdays. It didn’t become intense, she said, until August. At that point she told herself she could endure anything for six weeks.

After putting in the training, Thomas was ready to make her swim that would traverse two state lines and time zones.

She had a team in a nearby boat watching her every move and keeping her fueled – and motivated – for her long journey.

“The biggest part of it was relying on my team,” she said. “I had 13 people reminding me to keep going. Every 30 minutes, I drank liquid carbohydrates from the water bottle they would throw out to me, and then they reeled it in. At 30 hours, I craved something chewable and not liquid, so they gave me carrots and Chips Ahoy cookies. They sent out cheesy risotto a few times; it was amazing.”

The greatest challenge during that 80-mile nonstop swim, Thomas said, came at that halfway point.

“I became discouraged and wondered how I would get through the second half,” she said. “But, with some tough love and encouragement from my husband, I mustered enough motivation to focus on all the people supporting me through this journey and what they had sacrificed to physically be by my side supporting me. I couldn’t let them down, and I had to keep going.”

After her epic swim, Thomas will continue to hit the water, searching for more ways to challenge herself, and maybe even break another record. “I may try to do something longer than 80 miles,” she mused. “I’m not going to sit still.”