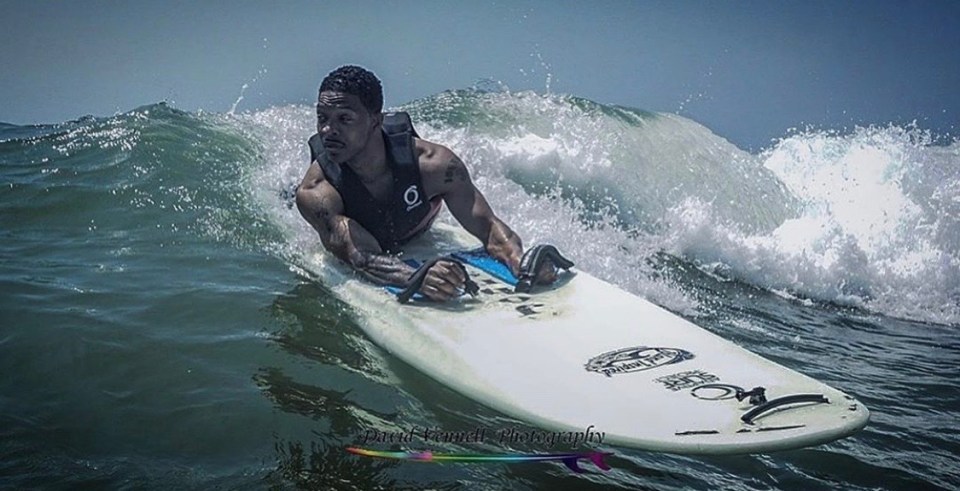 The first time Ernie Johnson tried surfing he hated it. Even the second and third times tackling the waves, he still wasn’t smitten with the sport.

The water and the waves, he admits, were intimidating.

“It can be scary, even terrifying,” he said. “You’re laying down on the board, and have this huge wave coming right at you. That’s scary.”

For even the most skilled surfers, the power of the ocean can be intimidating, but it’s even more so for someone like Ernie, who doesn’t have use of his legs and only limited movement in his hands.

A high school football injury left the South Carolina native an incomplete quadriplegic, so when he surfs, he’s belly down on the board at eye level with the waves crashing toward him.

Even though he didn’t like adaptive surfing after the first few tries, Ernie returned to the sport again and again. Today, he describes it as “his favorite thing to do in life,” and it’s one he’s gotten quite good at, too.

Ernie recently won the East Coast adaptive surfing championship, and competed for the national title in the USA Surfing Adaptive Championship in California on June 13.

What’s even more impressive about Ernie’s rise to the top of the adaptive surfing world, is the fact that up until four years ago, he’d not even touched a surf board, even before his 1997 spinal cord injury.

Always an athlete, though, Ernie likes a challenge, and he’s hoping his successes can inspire others. He’s starting with the patients at Tidelands Health Rehabilitation Hospital at Little River, an affiliate of Encompass Health.

When he’s not riding waves, Ernie is an administrative assistant at the South Carolina hospital.

There, he shares his story, particularly with those patients who are struggling with the limitations a life event has placed on them.

“He’s been in a hospital bed,” said Carey Swanson, the hospital’s CEO. “He knows what it’s like to have to fight for your independence. He gives them hope that it can be done. He’s just the most positive guy. He makes them feel comfortable.”

Ernie was at the top of his game, entering his senior year in high school. He was an “above average” football player at Conway High School. He was poised to go on playing ball in college and possibly professionally after that, but a direct hit in a pre-season game ended all thoughts of that.

The head-on hit snapped his neck, making him a C4-C5 quadriplegic. His life would be forever changed, but Ernie’s outgoing, positive personality wouldn’t take a hit.

As family and friends crowded his hospital room, he was the one cheering them up. “Everybody was coming in look all sad,” he recalled. “I was like, ‘Y’all are supposed to be cheering me up, come on.”

Even the doctors, who informed Ernie’s mom that his prospects of living independently were virtually impossible, couldn’t get Ernie down. He proved them wrong, and after receiving rehabilitation, he finished high school—on time—and started attending a technical college, though he quickly realized he wasn’t ready for college and dropped his classes to get back to his real love—sports.

He coached a high school basketball team for a while, and continued working out, building his upper body strength. He started body building, and was the No. 1 ranked quadriplegic body builder in the nation.

Though he’d lived near the coast his entire life, surfing was one sport he never tried his hand at, so when a local radio broadcaster approached him about adaptive surfing, he decided to give it a try.

Ernie’s story is known throughout his hometown, so when Tyler Watkins would see the former high school football start at local sporting events he was broadcasting, he knew exactly who he was and was tracking his progress from a distance.

In addition to working in broadcasting, Tyler also works with a local adaptive surfing program, Wheel to Surf. Knowing Ernie’s athletic abilities, he approached him about trying surfing.

“He was in the shallow water, and I remember when he fell of and the look on his face,” Tyler recalled. “It was a look of sheer terror. I don’t think he was real eager to go back, but he did.”

Knowing that he had someone like Tyler leading him to the wave—in adaptive surfing the surfer has anywhere from two to three handlers guiding them both into and out of the wave—helped build his confidence, and Ernie was becoming adept at riding the waves off the coast of South Carolina.

In fact, Ernie was so good at riding the waves in Myrtle Beach that he was winning competitions, and if he was winning there, why not try some of the larger waves on the West Coast.

Just as it was his first time surfing in South Carolina, Ernie’s first wave in California was “terrifying.”

“The waves in the East are completely different – no comparison to those out West,” he said. “The ones in the East are short and dumpy, maybe 3 feet. In California, they’re more like 10 feet. Just imagine laying on your board with a 10-foot wave coming at you. That’s scary.”

It didn’t deter Ernie, though. His first competition out West, he broke his nose and finished “dead last.”

Though he didn’t win the championship this year, Ernie was excited to compete at that level and hopes to do so again with different results.

Tyler said what makes Ernie such a talented surfer is his ability to study the ocean and read the waves. If he does that well, he can ride them well, small or large, even with his beginner board.

“Ernie has had a beginner board, not a performance one that all the others are using,” Tyler said. “The board is very long and thick; it’s designed to do nothing but go straight and be stable.”

Ernie also lacked a beach wheelchair, having to use his standard wheelchair with skinny wheels dragged through the sandy beaches.

Despite those challenges, Ernie, always positive, continued to compete and win, which inspired Tyler to help Ernie get a beach wheelchair, and ultimately a performance board, as well.

He started a GoFundMe page for Ernie, and quickly generated enough donations to purchase both. The beach wheelchair is on order, and today, Ernie will compete for the national championship on his new performance board.

While Ernie’s made quite a splash in the adaptive surfing world, he’s also making waves at his hospital, Tidelands Health Rehabilitation Hospital at Little River.

As an administrative assistant, his interactions with patients would typically be minimal. That’s not the case with Ernie, though.

Carey said his positive attitude is inspiring and infectious, so she wanted to get him in front of patients, especially those struggling with a new disability.

“We do leadership rounding, all of our senior team is assigned to a patient room, and so is Ernie,” she said. “He’s just so moving and impactful with patients. We all thought it would be great to include him, so he rounds on patients regularly to see how they’re doing. He really makes a difference.”

Staff at the hospital are also known to call on Ernie to demonstrate how different tasks can be performed in a wheelchair, giving patients confidence that they, too, can regain some of the independence they once had.

As for Ernie, he just loves being around people and making them happy. He’s quick with a compliment and never has a down day. He encourages his colleagues to approach their patients the same way, Carrey said. That’s the reasons she and her leadership team agreed unanimously to hire Ernie, despite his lack of on-the-job experience in healthcare.

“Ernie brought the experience of who he is and what he’s been through,” she said. “He’d have to learn the medical jargon and abbreviations, but rehabilitation is who we are, and Ernie knows that. When we have someone here who has a new disability, it means so much to hear from someone who has been through what they’re going through.”

Especially when a patient is hearing from a former star athlete, who regained that status after a life-changing accident left him a quadriplegic.