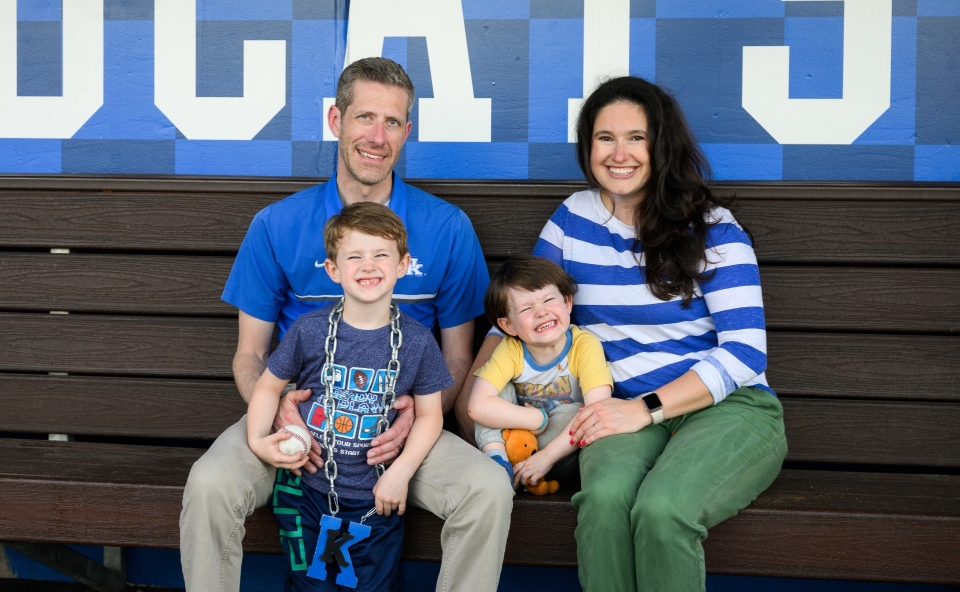 Matt May is a University of Kentucky Wildcat to his core. He is a UK graduate now working at a job he loves as the university’s associate sports information director. “Sports is the best reality television. You never know what’s going to happen day to day.” In addition to his busy career, he’s a husband and father to two rambunctious young boys, Max, 6 and Miles, 3.

Everything came to a halt when he was diagnosed with shingles just a few months before his 44th birthday. At first, he didn’t let it slow him down much, but weeks went by and May was still not feeling well.

‘I Think I’m Having a Stroke’

Shaky and unbalanced, May told his wife Carmen that something wasn’t right. He recalled stumbling down the hallway and telling her, “I think I’m having a stroke.” After speaking with his doctor, May and his wife went to the emergency room, where his symptoms escalated. By the time he was admitted, the left side of his body and face were paralyzed. He had indeed had a stroke.

Testing revealed that May’s stroke was caused by the varicella-zoster virus—better known as shingles. The virus crossed the blood-brain barrier, damaging blood vessel walls and May’s brain, causing a stroke. Anyone who had chickenpox in childhood can develop shingles in their lifetime, leading to a higher risk of other conditions such as heart attack and stroke.

After a two-week stay in the hospital to recover from shingles, May was released to Cardinal Hill Rehabilitation Hospital for inpatient rehabilitation. Fortunately, the stroke didn’t effect May’s cognitive and speech function, but he had a lot of work to do to regain mobility on his left side.

His therapists got right to work. They developed a customized care plan for May with a focus on walking again and doing all the little things May was accustomed to doing on his own. “I was paralyzed basically on my left side,” he said. “There was a lot of therapy teaching me how to take a shower, how to put on my clothes. I didn’t really have any grip. I think that was the most frustrating thing.”

Focusing on his Family

May wanted desperately to be back home with his family before his birthday and play with his kids. “I just wanted to be able to throw a ball with my sons in the backyard,” he said. He was also eager to return to work ahead of the start of UK’s baseball season. With an upbeat perspective and healthy dose of humor, May followed his therapists’ plan.

In the beginning, he worked on improving his ability to perform activities of daily living, and rebuilding strength and muscle function on his affected side.

He got plenty of walking practice with his therapists, first with a cane, then on his own. “We would walk up and down and up and down (the therapy gym) and go up and down steps.” Over the course of two weeks, May improved a little each day. “Something that was really important to me was how all the therapists are so patient and positive about every day. They’ve all been supportive from the very beginning.”

His occupational therapist, Cameron Mullins, said May never gave up. “Matt is a hard worker, and it’s shown throughout his rehabilitation—both while he was in inpatient and outpatient so we made sure to celebrate when he began using his left hand to do things like open a Gatorade bottle or tie his shoes.”

As the strength and range of motion in his shoulder and affected side improved, May focused on the finer movements of his left hand—like pinching and grasping. “Towards the end of his rehab, we spent a lot of time practicing work-related tasks like typing to improve his independence and satisfaction in his job,” Mullins said.

His hard work paid off. After two weeks in inpatient rehabilitation, May was discharged to return home, just one day ahead of his birthday, walking across his lawn with only a cane for help.

He also got back to one of the things that mattered most to him—playing catch with his sons in the backyard. “The day I got out I went to get my boys at school. When I was able to come home and both of them sat on my lap with my arm around them, that was the first time I was like, ‘man, I survived.'” He felt strong enough to even coach his son’s t-ball team in the spring!

Donning his Wildcat blue shirt, he went back to work in time for UK’s first home baseball game like he pledged to do weeks earlier when he couldn’t walk.