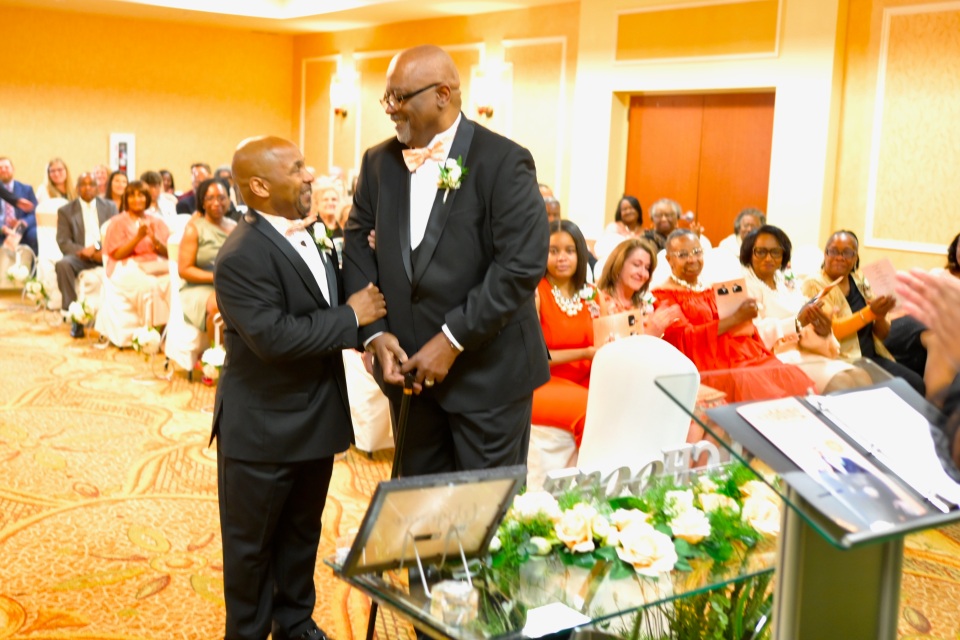 When Jeff Wilson suffered a stroke in September 2021, his life took a turn. Set to walk down the aisle in his wedding ceremony in October 2021, his celebration would have to wait. The stroke caused him to lose mobility on the left side of his body. He couldn’t walk on his own and he struggled to perform daily tasks. He had to step away from his event decorating and catering company, which he co-owns with his husband, Waymon Whitfield. Despite the obstacles, Wilson and Whitfield were able to exchange nuptials—just later than they planned—thanks to the help of a few friends Wilson never expected to make.

‘God Blessed Me with These Angels’

Wilson recalled that when he first arrived at AnMed Health Rehabilitation Hospital in South Carolina for inpatient rehabilitation he wasn’t in good spirits. “I was at the point that I wanted to give it all up,” he said. But then he met therapists Maria Hammon, Rebecca Krouchick, Christopher Hannick and Kassandra Sipka. He quickly bonded with all of them, forming friendships and finding a renewed sense of hope. “I knew God blessed me with these angels, and I was going to be OK.”

Wilson’s therapists were aware of his unfortunate situation, and it fueled their desire to help him succeed. “He was such a hard worker and was determined to make progress each day. I was honored to join him in his rehabilitation journey to work towards his goal of walking down the aisle,” Hammon said.

Determination and Therapy Turn into Results

During inpatient rehabilitation, Wilson participated in three hours of therapy five days per week. In physical therapy with Hammon, Wilson used a technology called the Arjo Electric Lift walker for gait training and also focused on safely transferring to and from his wheelchair, so he could be more independent when he returned home.

In his occupational therapy sessions with Krouchick and Hannick, Wilson worked on weight bearing on his left side using a technique called active assisted range of motion in which the therapists helped him move his joints, so he could incrementally regain mobility on his affected side. Krouchick also prioritized activities of daily living such as bathing, grooming and dressing, making it easier for Wilson to care for himself.

According to his care team, his positive attitude was contagious as they cheered him on every step of the way. “He is fun, motivated, hard-working and adoringly devoted to his husband. I knew his desire to walk at his wedding would be a huge motivator,” said Sipka, his speech therapist.

During his month-long stay, Wilson progressed from using the electric lift to walking a few feet to walking on his own for 50 feet. There was just one thing left to do.

Couple Says ‘I Do’

In April 2022 Wilson and Whitfield were finally able to host their wedding ceremony and celebrate with family and friends. The guest list included his therapy team that witnessed Wilson do the one thing he wanted to do most. “It was incredible to see him walk down the aisle and dance on the dance floor with his friends and family,” Krouchick said. Wilson recalled walking into the ceremony and seeing his therapists. “I can’t even explain it. It filled my heart with so much joy,” he said. “This wouldn’t have happened if it weren’t for them.”

Wilson regained the strength and confidence to get back to running his event decorating and catering business with Whitfield and continues to make progress at home.