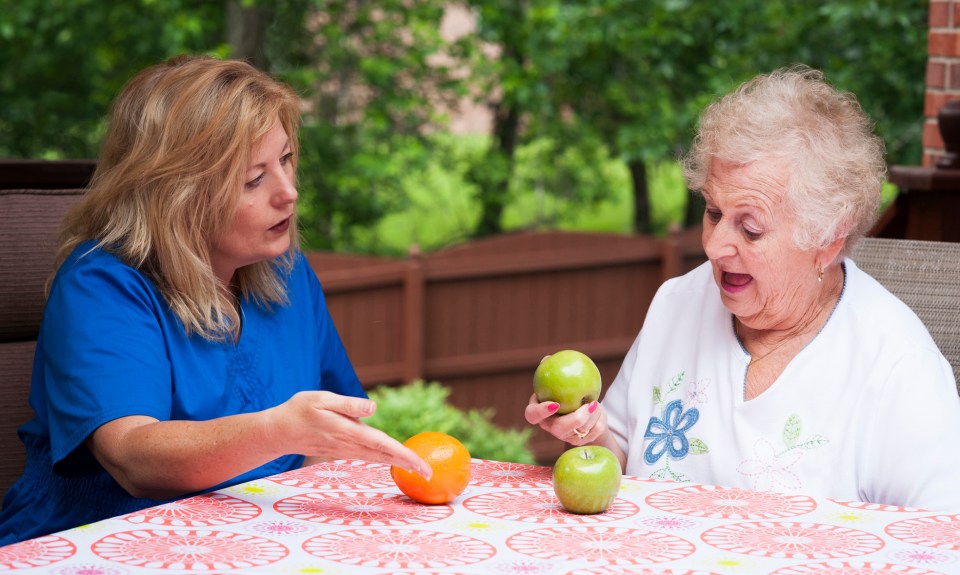 Speech therapists can help those with aphasia find their words.

Aphasia is a communication disorder resulting in the loss of ability to understand language, read, express speech or write. There are several different types of aphasia. It can range from being mild to severe.

These different types have different signs and symptoms, but one thing they share in common is they are caused by damage to the brain. Although language is affected, aphasia does not impact intelligence.

“Aphasia is a language deficit caused by an acquired injury,” said Stacy Thomashaw, director of therapy operations at Encompass Health Rehabilitation Hospital of Sunrise in Florida. “No matter the type, it’s always an acquired disorder like after a stroke or brain injury.”

Thomashaw is also a speech language pathologist and has worked closely with aphasia patients. She said treatment options vary depending on the patient and the type of aphasia, but the goal in inpatient rehabilitation is the same: to get patients functioning at their highest level possible.

The Main Types of Aphasia

Named after French scientist Paul Broca, Broca’s aphasia severely impacts speech. In this form of aphasia, the frontal lobe, which controls the functions linked to speech production, has been impacted.

Speaking is usually limited to just a few words. Individuals with Broca’s aphasia may have difficulty producing the right sounds.

Though, someone with Broca’s aphasia might not be able to speak well, they could still be able to understand what others are saying. They also may be able to read, but writing is challenging.

While individuals with this form of aphasia can speak in long sentences, often what they say doesn’t make sense.

A combination of both Broca’s and Wernicke’s aphasia, global aphasia is the most serious. Individuals with global aphasia cannot speak fluently or understand speech. Like other forms of aphasia, they may still possess their other cognitive and intellectual capabilities.

This type of aphasia is caused by injuries to both the Broca and Wernicke areas of the brain and is typically seen immediately after a traumatic brain injury, stroke, brain tumor or other brain disorders that progress over time

All types of aphasia should be treated by a licensed speech language pathologist (SLP), and depending on the severity of the condition leading to the diagnosis, in an inpatient rehabilitation hospital.

Speech therapists cannot only help with the speech impairments, but they can also help with the language impairments associated with the condition. As with any type of brain damage, Thomashaw said an SLP will help retrain your brain.

“The way I describe it to patients is if you’re driving home, and you always take I-95 and this certain exit, that’s the brain’s natural movement,” she said. “If you have had a stroke or other brain injury, that pathway is blocked, and you have to take side roads. You now have to learn all those side roads. You’re still going to the same place, but you have to learn how to get there a new way. As an SLP, I have to open those pathways. That’s done with repetition, mass intensity and adaptation.”

A speech language pathologist can help those with aphasia find better ways to communicate with others and also better understand what others are saying. With speech therapy, the condition can improve over time and may continue to improve well after the initial stroke or other brain injury that caused it.

Helping a Loved One with Aphasia

It is natural to want to help a loved one with aphasia by helping them fill in the blanks, but often times those with the condition prefer to have extra time to think before others step in to help. Before offering assistance, let them communicate as much as possible independently. When your loved one lets you know they want help, providing them cues to find the right word is one way you can assist them.

Communication Tips and Strategies for Aphasia

If you have been diagnosed with aphasia finding the right words can be frustrating. Follow these tips and strategies to help you better communicate what you want to say.