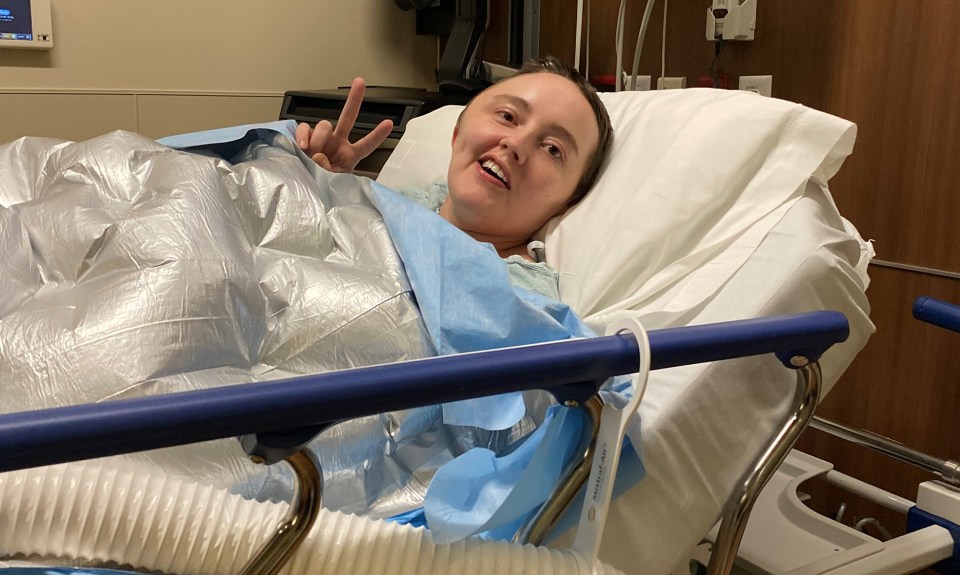 When Jessica Schlosser’s trainer suggested she might be having a stroke, her first thought was he must be mistaken.

She was only 34 and had no medical history that put her at risk. “I was in denial, though,” she soon realized.

While she was working out, the left side of her body quickly became extremely weak, a telltail sign of a stroke. Knowing the sign, her trainer called a mobile stroke unit to the gym. A CT scan at the emergency department confirmed she was having a stroke on the right side of her brain. After administering tPA, an emergency craniectomy was performed.

“I was intubated and placed in the ICU for 11 days and had to wear a helmet,” Schlosser recalled.

Learning to Walk (and More) Again

Schlosser’s stroke left her unable to move on her left side. She needed assistance with almost all daily acitivities such as eating, dressing and grooming.

“I was unable to sit without assistance; I needed help with all my self-care,” she said. “I was drooling and couldn’t eat much. I needed two people to help me with all my transfers. I was shocked and overwhelmed that I had lost all movement on the left side of my body.”

On Sept. 2, 2021, Schlosser was admitted to Encompass Health Rehabilitation Hospital of Cypress. There, her care team—consisting of therapists, nurses, physicians, dietitians and a case manager—designed a treatment plan to help Schlosser achieve her goals. She wanted to walk again, and she wanted to be able to use the restroom on her own.

During her two stays at the rehabilitation hospital, her therapy team used advanced technologies, such as the Sara Steady and Lite Gait to help her walk again. They also helped build back her strength and balance with weight-bearing exercises. While the therapy was challenging, her care team said Schlosser remained determined, meeting each new task with a positive attitude.

“It was an honor to be able to help Jessica on her road to recovery,” said Jared Horne, her physical therapist. “She was so driven to overcome the challenges put in front of her and brought 100% to every therapy session. Whenever we presented her with a challenging exercise or activity, she would not hesitate to attempt it.”

When Schlosser discharged from Encompass Health Cypress, she’s happy to say she accomplished her goals. She was able to walk with a cane and care for herself once again. She said her recovery was not an easy one, but her care team kept her positive.

“Encompass Health Cypress has been a second home to me,” she said. “I have met some of the best people. My therapists Danielle and Jared gave me my life back.”