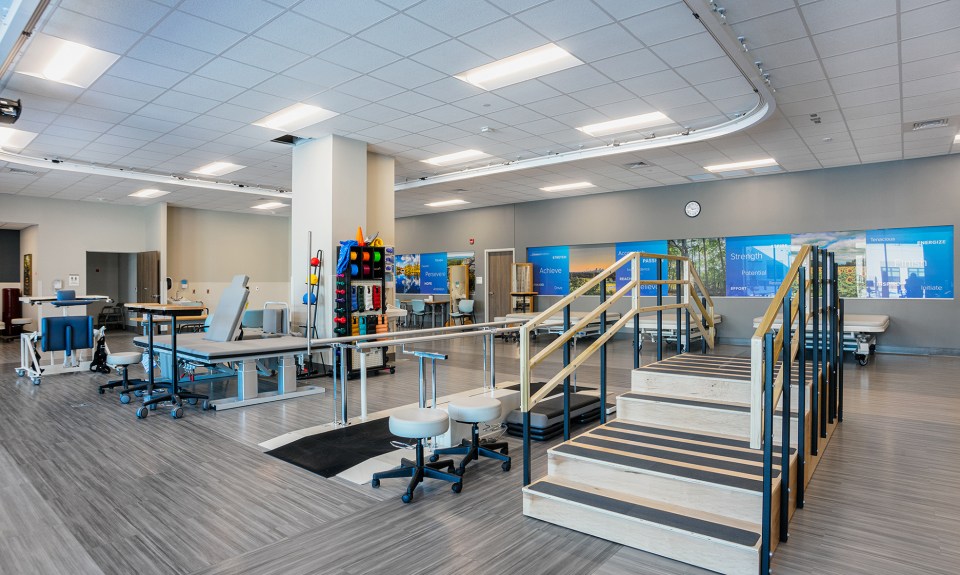 As IMPACT Strategies worked to construct the new 40-bed rehabilitation hospital in Shiloh, he was taken back to his time at TRISL.

“I have been the project manager for TRISI from start to finish,” he said. “It’s really been a project that’s near and dear to me, knowing that I can give back and use some of my experience, and how this facility will be caring for people recovering from stroke, accident victims and more.”

Michael knows firsthand how rehabilitation can help in recovery after a serious illness or injury.

An Out of the Blue Emergency

At the age of 42, Michael was active. He competed in triathlons and coached little league sports, in addition to his full-time job as a project manager with IMPACT Strategies. One day, he woke up and had no equilibrium or balance and was experiencing stroke-like symptoms.

At the ER, they performed an MRI. Michael was having “brain bleeds,” but it wasn’t a stroke; it was a cavernous malformation on the brain. Typically benign, Michaels’ ruptured causing bleeding in the brain.

“I didn’t have a stroke, but it had the resemblances of a stroke,” he said. “They told me that most individuals have cavernous malformations—they compared it to a non-cancerous mole—but mine was very rare that it actually bled.”

After having neurosurgery at BJC, Michael stayed at the acute hospital for about two weeks before he was stable enough to begin rehabilitation.

From ‘Wheelchair to Walker to Cane’

When Michael arrived at TRISL, he couldn’t walk, and he had little to no movement in his left side. He wasn’t familiar with inpatient rehabilitation, or TRISL, at the time, but he quickly learned that intense therapy was what he would need to recover.

“I had really lost everything on my left side,” he said. “It was to the point that I couldn’t walk or function as I had in the past. I couldn’t lift my left arm, and I was used to being very active.”

Early during his stay, Michael knew it would be challenging, but he said the staff was comforting and worked with him to help him reach realistic goals. He participated in therapy several hours a day, where he received customized care to meet his unique needs.

Michael arrived at TRISL in a wheelchair. In the two weeks there, he transitioned from the wheelchair to a walker and then to a cane.

Michael continued to receive outpatient therapy after leaving TRISL. While most would never notice the slight limp that remains on his left side today, Michael said he still has limitations, though he’s not sure where he would be without the therapy he received at TRISL.

Getting to serve as project manager on TRISI, he said, was an honor and a reminder of the great care he received.

“I felt like I could give back to this project,” he said. “It’s the most personal project in my career because I truly knew how the facility would be functioning. I really had an interest in this hospital, knowing how it will help so many individuals.”