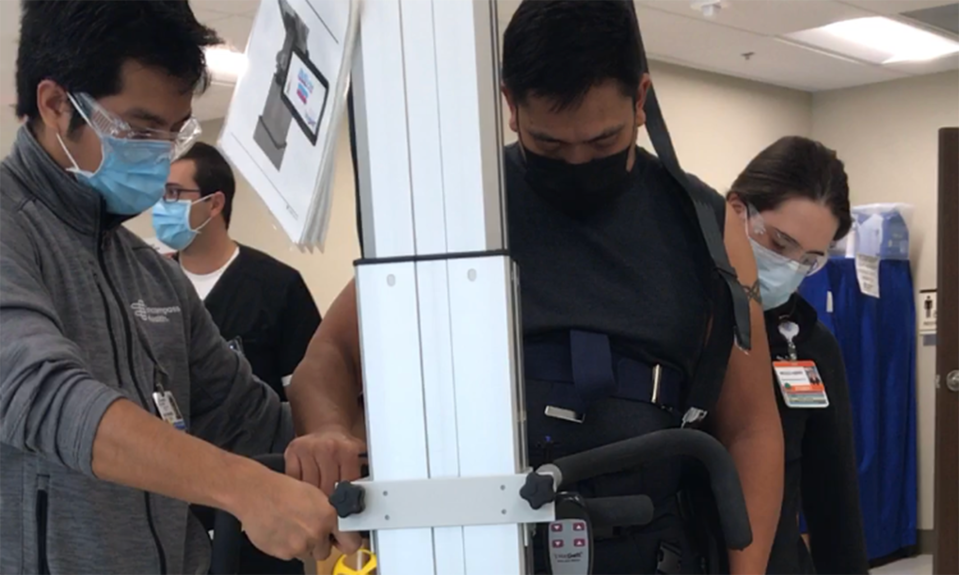 In a matter of minutes, Danilo Sangco went from being a fully functional 49-year-old to not being able to walk or even use his hand to grip his smart phone.

On May 2, 2021, around 3 a.m., Sangco was jolted awake by a loud noise and found himself stumbling to get up. When he reached for his phone, he couldn’t grasp it with his left hand.

Sangco had had a hemorrhagic stroke. Once his medical condition was stabilized at the hospital, his doctors recommended inpatient rehabilitation to help him recover from the stroke.

Sangco was skeptical. He thought he could manage and recover through outpatient therapy, but after some consideration, he took his doctors’ advice.

“The more I thought about it I knew I needed inpatient rehabilitation,” he said. “My sister searched all the inpatient centers, and we chose Encompass Health Cypress because they had the best reviews. I am glad I made the right choice.”

When Sangco arrived at the rehabilitation hospital, he couldn’t walk and had little movement in his left side. His recovery goals: he wanted to walk again and just feel like himself.

“I wanted to feel normal again and do the things I normally would be able to do,” he said. “I wanted to get my left hand and left leg working again and wanted to ultimately be able to work and ride my motorcycle again.”

Getting Back to ‘Normal’

Sangco’s care team used the advanced technologies and equipment at Encompass Health Cypress to help him get back on his feet safely.

The AutoAmbulator, a treadmill system that uses robotics, helped Sangco learn to walk again while the system’s harness protected him from falling. As his strength increased, he moved to the parallel bars, where he could practice walking with the assistance of his therapy team.

Sangco was at Encompass Health Cypress for 14 days. He said his care team gave him confidence, something he had little of when he arrived at the rehabilitation hospital.

“At the beginning, I was broken-hearted and didn’t think I could do this, but Macey and the whole team at Encompass Health Cypress would constantly motivate me and helped me push through those hard times,” he said. “I started to feel that I could do this. There’s something about someone believing in you that makes you start to believe in yourself.”

When Sangco left Encompass Health, he was walking again and could even climb stairs. He said his balance greatly improved, as did his confidence in himself. Thanks to the motivation he received from his Encompass Health care team, he said he was able to trust himself again.

“Once you have the motivation and don’t get discouraged and you trust yourself, that’s what creates the biggest impact on your life and recovery,” he said.