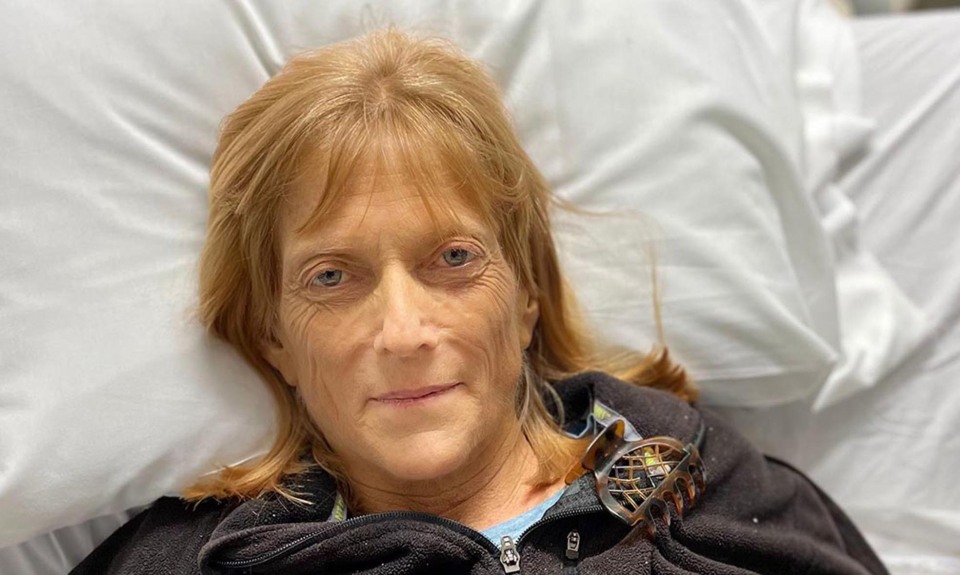 Physical therapy helped LeeAnn Schmitt grow stronger after she broke her hip and femur, but it was the fellowship and encouragement of others that she says accelerated her recovery.

“It’s just a huge motivator when you have other people cheering you on,” said Schmitt, 62. “People you don’t even know are cheering for you. It just made a huge difference.”

The retired office worker spent three weeks at Tidelands Health Rehabilitation Hospital at Little River, an affiliate of Encompass Health, after a fall in her home in mid-June left her with a broken left hip and femur. It was the same hip she’d broken back in 2016 after a fall on black ice in the driveway of her previous home in New York, before she and husband Paul retired and moved to southeastern North Carolina.

“My legs had locked in place, but my body didn’t know my legs had stopped, and I fell forward, hitting my head on the bathroom tile and slamming my hip into the floor,” Schmitt recalled. “I was in such agony.”

Schmitt was hospitalized for several days. She underwent surgery to replace the existing titanium rods and hardware that had been damaged in her fall and to repair her broken hip and femur. When her physician said she’d need intensive physical therapy to recover from her hip fracture and recommended Tidelands Health Rehabilitation Hospital, Schmitt balked at the idea.

“I was a very unhappy person,” she says. “I was pouting like a 5 year old. I just wanted to go home. Under duress, I said I’d go.”

‘Your song is coming’

Once settled in at Tidelands Health Rehabilitation Hospital, Schmitt’s attitude began to shift as she watched her medical team carefully craft a plan to help her recover from surgery and get back to her former self.

She immediately wanted to know how long it would be before she could go home.

A board in her room that projected her discharge date and charted her daily goals and accomplishments was a monumental motivator.

“When you wake up and see that every day, you find strength and hope,” she said.

Even more motivating than the progress board in Schmitt’s room were the discharge days for fellow hospital patients, she said. At Tidelands Health Rehabilitation Hospital, patients heading home get a huge send-off with music, a public announcement and encouragement from their care team and others on the floor.

“They play a song on the speakers and people open their doors and wave goodbye,” Schmitt said. “I was in bed when they opened my door, and I remember the look on one gentleman’s face as he was being discharged. He waved at me and wished me luck and said, ‘Your song is coming.'”

As Schmitt went through physical and occupational therapy, she marveled at the genuine concern displayed by her care team.

“They’re professional, caring, and they give you the will to keep working,” she said. “They really made me feel like it’s not just a job to them. They share bits about their lives, and you feel like you’re being cared for by family. They want to see you succeed.”

Shanna Gwyn, one of Schmitt’s therapists, said she was a “joy to work with.”

“She was motivated, had a great sense of humor and was simply amazing,” Gwyn said. “There were ups and downs, but she took everything in stride.”

The progress board in every patient’s room, the celebratory send-offs and the fellowship all help motivate patients, Gwyn added.

Schmitt’s big celebration came on July 10. In addition to fellow patients, everyone from members of the hospital’s environmental services team to a respiratory therapist stopped by her room to say goodbye.

“Tears were rolling down my face,” she recalled. “I was leaving one family and going home to another.”

“She was always willing to try to do as much as she could and be as independent as she could, even on the bad days,” Sellers said. “Attitude plays almost 100 percent into a patient’s recovery. If they’re not as positive as they can be, they’re not going to see the point in physical therapy. Even on bad days, you have to look at where you were on the first day, or even yesterday, and look at what you’re doing today. If you’re just doing two steps, then you celebrate those two steps.”

Schmitt will continue her therapy at home as she grows stronger each day. She said she’s looking forward to visiting with her neighbors and making trips to spend time with family up north once she’s mobile again. She and her husband have three sons and three daughters as part of their blended family, plus nine granddaughters.

“I also want to reconnect with everyone who’s done anything and everything for me,” she said. “Everything I’ve been through makes you want to rid your life of the petty things and just give back, connect with other people and just be a good human being.”

Her experience at Tidelands Health Rehabilitation Hospital gave her a glimpse into the human condition and underscored for her the importance of making connections with others.

“I’m making progress because of where I started,” she said. “Going to Tidelands was the best decision I ever made. How long can you stay cranky around so many nice people? Watching others reach a milestone keeps you from pitying yourself. And it was without anyone having to say anything. Just watching them succeed and making progress was everything.”

Editor’s note; This article was originally published on Tidelands Health’s My Carolina Life.