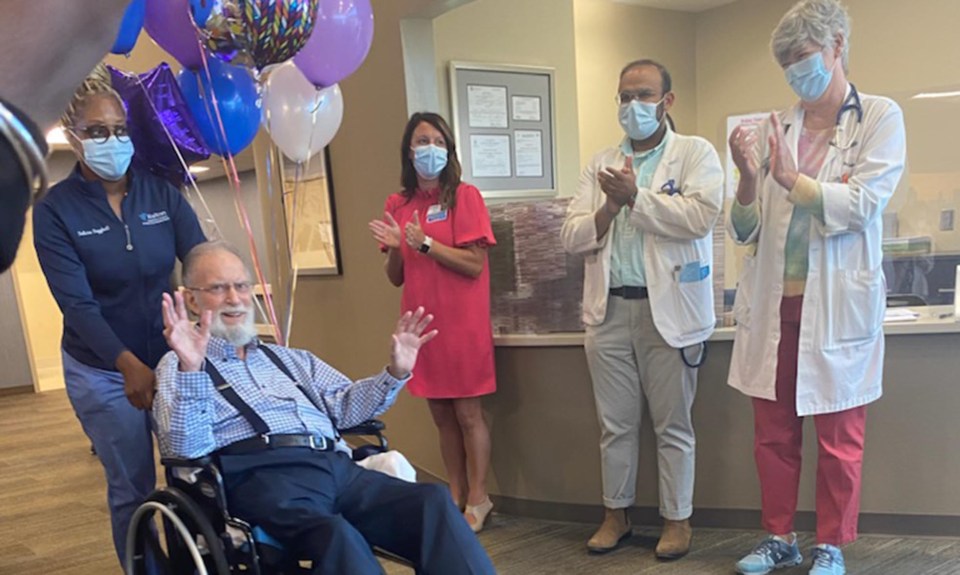 Isaac “Rich” Bowen always felt he had a calling in life—to share his faith with others. At age 11, he began preaching on the street in Winston Salem, North Carolina, which led him to a lifelong career in ministry that culminated at New Hope Worship Center in Augusta, Georgia.

Shortly after his retirement, Bowen underwent mitral valve replacement surgery and nearly lost his life twice after the surgery due to cardiogenic shock and internal bleeding. He spent more than a month in the ICU and nearly three months in the hospital. After all this time, Bowen is not done sharing his story. He’s eager to show others that with faith, hard work and the right team, anything is possible.

Learn more about Together to End Stroke

Encompass Health is a national sponsor of the American Heart Association/American Stroke Association's Together to End Stroke campaign. By working together, we can show how stroke is treatable, beatable and preventable.

Once stabilized, Bowen began inpatient rehabilitation at Walton Rehabilitation Hospital, an affiliate of Encompass Health. Upon his arrival, he required assistance to complete nearly all basic functions, including sitting up on the side of the bed.

“When they rolled me into my room, I didn’t have the strength to raise myself up in the bed,” he said. “The first time I stood up, it took two nurses supporting me.”

Together with his therapy team, Bowen set personalized goals. After three months in the hospital, his goals were straightforward. Long-term, he wanted to be as active as he was before surgery. In the short term, after three months in the hospital, he simply wanted to be able to walk across the room to the bathroom and to be able to return home safely.

Progress came rather quickly—quicker than he or his family expected.

“When we came here that first day, I didn’t believe it would be possible to be at the place I am right now in two weeks,” he said. “It didn’t seem that that was a possibility, but it’s come to reality and fruition.”

During those two weeks, Bowen took his first steps since before surgery, and was ultimately able to walk more than 150 feet. He also worked on climbing stairs so that he would be able to navigate the three stairs required to enter his home. Prior to discharge, he was able to climb four stairs unassisted. Speech therapists worked with him to improve his ability to swallow and eat, allowing Bowen to enjoy his first complete meal in months.

In the midst of his rehabilitation journey, Bowen was also able to share his story via phone with more than 450 ministers and their wives who had gathered for a conference, telling them that he has experienced the messages they preach firsthand.

As Bowen prepared to return home for the first time in three months—his own Christmas Day, he said—he and his family felt confident that they were ready to face whatever comes next.

“He was so weak, we were just praying for supernatural strength,” said Bowen’s wife, Faye. “The therapists have just been so helpful for him. They’ve let him do what he can do for himself. It’s been a really wonderful experience and we’re so thankful and so pleased for him to be at the point that he is—for him to be able to go home, and to go home so strong, we know we can handle the situation.”

In addition to navigating the physical challenges that came with critical illness, there came mental challenges as well.

“Going through this I only had one day where I really, really hit a low spot,” Bowen said. “I realized how easy it is for people to give up and quit.”

Those mental challenges were felt by the entire family, said Bowen’s son, Brad. The family has leaned heavily on their faith and the prayers from people around the world, but the support of his father’s care team has also been invaluable in easing the family’s anxiety after a traumatic few months.

“We’ve all been on a roller coaster,” Brad said. “One thing that has helped is the team’s attentiveness and their ability to help him gain confidence. It’s been great to see him ready to come home and know he’ll be safe; It’s amazing what a difference a kind word can make.”

With a combination of faith, hard work, and the expertise of the caring staff at Walton Rehabilitation Hospital, Bowen and his family have made it past the most extreme of the twists and turns of that roller coaster, and have set their sights on continuing to gain strength in the comfort of his own home.

“I thank the Lord for his strength, and also the staff for encouraging me every day and telling me, ‘This is our goal today and I believe you can do it,’” Bowen said. “That was more than I believed myself most of the time. You don’t want to disappoint those who believe in you.”