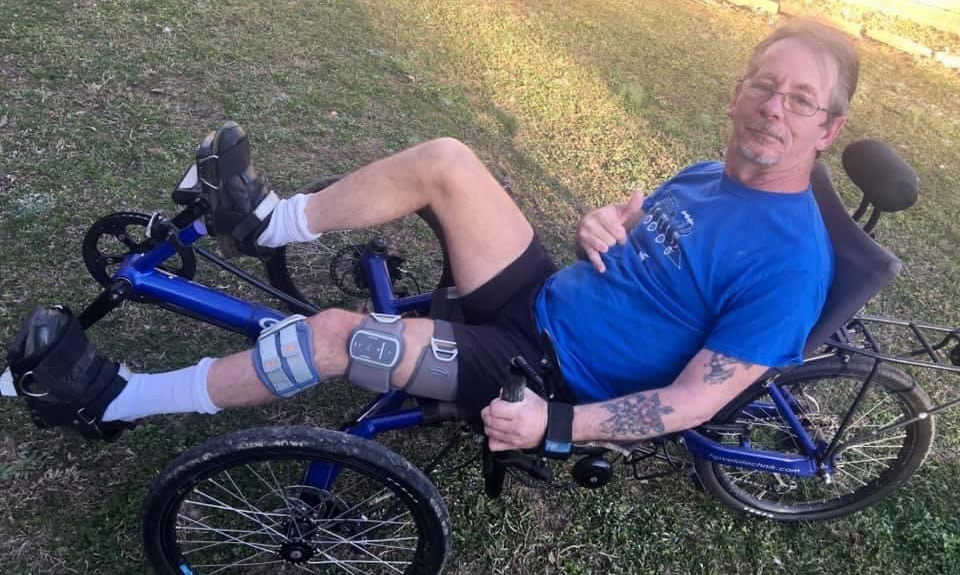 After a stroke, Dean Tisdale discovered adaptive athletics and his love of recumbent cycling. Since receiving his bike, Tisdale has logged more than 3,000 miles and discovered a passion for helping others find the joy that he did post-stroke.

It has been nearly seven years since the day that changed Dean Tisdale’s life. The then-47-year-old U.S. Navy veteran turned countertop and cabinet installer was rushed to the emergency room with a ruptured brain aneurism.

“They induced a coma, and the next thing I know, I’m waking up nine weeks later,” Tisdale said. “They told me that after the rupture, I had a stroke a week later. When you wake up in the ICU, you’re foggy. It took me a while to realize that had happened to me.”

Tisdale asked to get out of bed and use the restroom, but was told to wait for a nurse. That’s when he knew things were going to be different.

“They told me they’d call a nurse because they hadn’t taught me how to walk again,” Tisdale said. “Here I am, 47 years old. I thought, ‘This is going to be a fun road for me.’”

That road led Tisdale to Encompass Health Rehabilitation Hospital of Chattanooga, and ultimately led him to discover adaptive athletics and his love of recumbent cycling. Since receiving his bike, Tisdale has logged more than 3,000 miles and discovered a passion for helping others find the joy that he did post-stroke.

After Tisdale’s aneurism and stroke, he had difficulty using his left arm and leg. His priority was regaining his ability to walk, so he chose to receive rehabilitation at Encompass Health Chattanooga. Tisdale was no stranger to physical therapy, having underwent multiple back surgeries, so he immediately made his goals clear to his team.

“The first thing I told them is, ‘I’m ready to start learning how to walk,’” he said. “I wasn’t as concerned with the arm. I just wanted to walk, and I didn’t want to be stuck in a bed.”

Tisdale and his team got to work, and soon, he was able to take 20 steps.

“When you go from being wheeled into a hospital to taking 20 steps, that’s a big accomplishment,” he said.

With the help of occupational therapy, Tisdale also started to get partial movement in his arm and hand. Therapists also had his family bring his truck to the hospital so Tisdale could practice getting in and out.

“At first, I thought I’d be wheelchair bound the rest of my life,” he said. “When it came to discharge, they wheeled me to the door, but as soon as I got to the doors I hit the brakes and walked to my truck.”

Although Tisdale may have been surprised by his accomplishments, they weren’t a surprise to Sonya Mace, his physical therapist.

“He was really tenacious and kept working and had a positive drive and attitude,” Mace said. “He is one of the hardest workers I’ve had.”

Tisdale left Encompass Health Chattanooga able to walk independently, but he was unable to walk the same distance he once was. Always active prior to his stroke, Tisdale knew he needed to find a way to get outdoors.

“When you’re in the hospital for a long time, there’s such a focus on your impairments,” Mace said. “When you get involved and learn how to do other activities, your disabilities become your ability. It allows you to focus on what you can do—for example, how can we adapt a bike? Depression is a common side effect after stroke, but adaptive activities allow you to turn a negative into a positive and connect with others, which can help.”

Tisdale was immediately drawn to the focus on ability rather than disability. Through the VA, he was able to get a recumbent bike, which gave him a reason to get back outdoors and reconnect with others.

When he was first discharged from Encompass Health Chattanooga, Tisdale experienced feelings of isolation from his friends. While they were spending the summer riding jet skis or motorcycles, Tisdale was still working to regain his mobility. Cycling gave Tisdale an activity he could enjoy and adapt to his needs.

“It gives me freedom,” he said. “I can’t walk a seven mile greenway, but I’ll meet you on the other end on my bike. That bike has been a lifesaver to me.”

Nearly 3,000 miles later, Tisdale’s love of cycling is still going strong. He’s also returned to the water on his jet ski, and has participated in rock climbing and snow skiing with SPARC. Prior to its rescheduling due to COVID-19, he was training to participate in a paratriathlon, taking on the cycling leg for his team of three.

For fellow stroke survivors, Tisdale seeks to inspire through his determination. He’s also worked to connect others to adaptive activities in the hopes that they find the joy he has. At the end of the day, though, his message to others on a similar journey is simple.

“Don’t give up hope,” he said. “When you’re faced with a situation like I was, you find out you have determination like you never knew you had.”