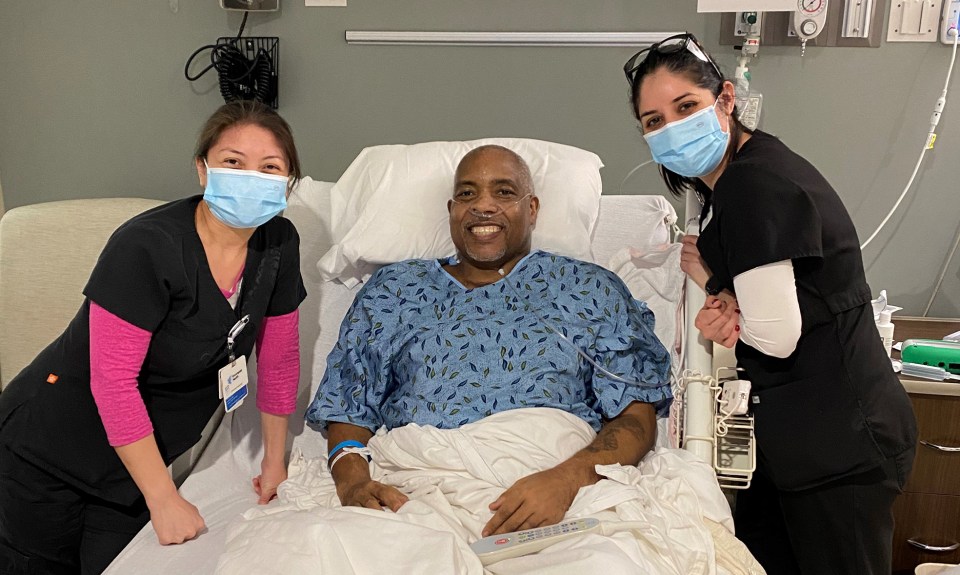 After four weeks in the hospital, doctors were certain Lafayette Johnson, 57, wasn’t going to make it.

He was admitted July 8 with difficulty breathing. Doctors told him a combination of pneumonia and COVID -19 was the culprit. His condition only worsened from there.

By the second week, Johnson’s lungs collapsed and his kidneys were shutting down. He had to be placed on a ventilator. By the fourth week, he had a heart attack and was placed on a second life support. It was then that doctors called his family.

“They called my wife and immediate family to the hospital to say their goodbyes,” Johnson said. “The doctors said I died twice while undergoing procedures.”

Johnson’s family didn’t have to say goodbye that day, though, and finally, in mid-September, he woke up. While mentally OK, physically, he was extremely weak. His doctors referred him to Encompass Health Rehabilitation Hospital of Cypress to receive the therapy he needed to recover from COVID-19 and build back his strength after months in a hospital bed on life support.

‘COVID devastated every muscle in my body’

Johnson recalls being skeptical. He didn’t understand how he could perform even the smallest tasks, much less therapy.

“COVID-19 devastated every muscle in my body, and I was in a hospital bed for five months,” he said. “I lost 57 pounds and wasn’t even able to stand up. I initially didn’t have much hope that therapy would work.”

His care team at Encompass Health Cypress changed that. Using a combination of physical and occupational therapy, his clinicians helped him build back his strength and recover from COVID-19, so he could work toward his ultimate goal of being able to walk again.

‘I was finally getting stronger day by day’

His therapists started with simple movements to build back Johnsons’ muscle mass. Therapy started at the bedside where they worked on sitting upright and transitioning from the bed to a chair.

They also focused on breathing techniques and taking adequate rest breaks between exercises, so Johnson could build stamina.

“He came to our facility severely deconditioned and requiring two-person assist for bed mobility and transfers,” said MaryGrace Artillaga, his physical therapist. “The most challenging part was how to get him to tolerate upright posture like sitting and standing without his blood pressure and heart rate going out of whack. There had to be the right amount of exertion, engaging his cardio-pulmonary-neuro-muscular systems to work together; activity pacing; and close monitoring of vital signs—and lots and lots of prayers!”

Johnson finally did begin to regain his strength. Once he could move from sitting to standing, they moved to working on walking.

“All the exercises they taught me helped build up my strength,” he said. “The therapists and staff didn’t give up on me. I felt like I was finally getting stronger day by day. I especially enjoyed walking in the parallel bars as I felt secure, and it reduced my fear of falling. Another important thing I learned at Cypress was to use correct breathing techniques and the need for rest and recovery between exercises.”

Johnson was at Encompass Health Cypress for almost six weeks. During that time, he went from hardly being able to lift his head to standing and walking.

His therapists said it was his commitment and determination to get better that helped him pull through.

“Mr. Johnson’s perseverance pushed him through his rehab journey with us, even on the more difficult days,” said Ariana Rogers, his occupational therapist. “I feel honored to have worked with him to get him back home and back to his life.”

Johnson, a retired Bronze Star Army sergeant and current parole officer, said he wasn’t giving up. “I didn’t give up—even after dying twice. I came back,” he said.

When Johnson discharged from Encompass Health Cypress in December, he could walk 150 feet with the assistance of a walker. He was also able to walk up stairs—a feat that was unimaginable when he entered the rehabilitation hospital in October to recover from COVID-19.

­­­“I thank God for all the wonderful people who helped me recover—Macey, Ariana, George, Lindsey, Nathan and all the other great guys at Encompass Cypress who got me to where I am now,” he said.