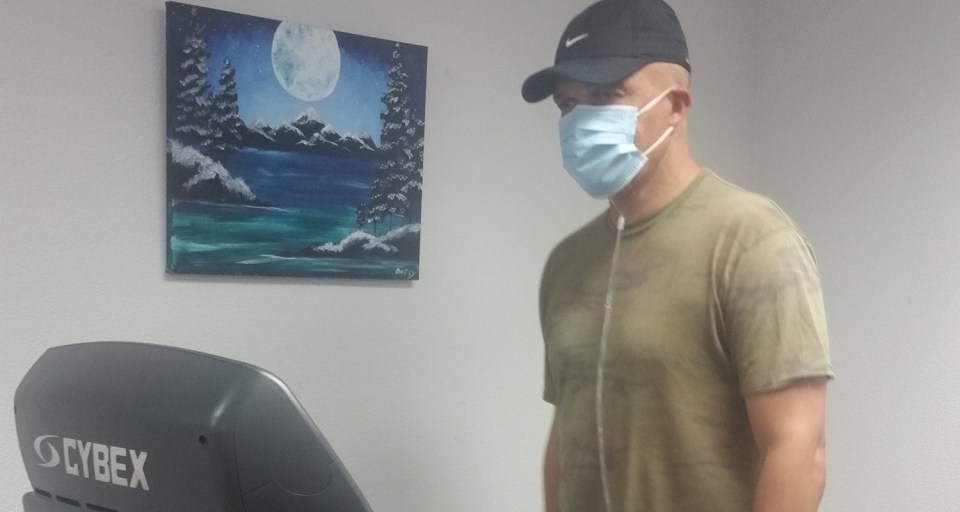 After surviving COVID-19, Renaldo Wall now walks two to four miles a day, a great feat he says, since doctors gave him a 6% to live.

Renaldo Wall has no idea how he got COVID-19 or why he had such a severe reaction to the virus. He does know that after more than two months in the hospital in and out of a coma and on a ventilator, he’s happy to be alive.

Wall is one of those inexplicable cases — he had no underlying conditions and at 56, was healthy, even training to run marathon. However, the virus hit him hard. It was at the start of the pandemic. There was still little known about it at the time, and the range of symptoms was changing daily.

“I just had no energy,” he recalled. “They put me on oxygen, and two days later they were inducing me in a coma to put me on a ventilator.”

Wall tested positive for COVID-19 and was in and out of an induced coma for 29 days. In addition to being on a ventilator, he also had to have blood transfusions, a feeding tube and a tracheotomy.

In May, his condition finally stabilized and he was able to come off the ventilator, but he was weak, unable to walk and barely able to feed himself. He was admitted to Encompass Health Rehabilitation Hospital of Henderson to help regain his independence and return to some of those activities he enjoyed pre-COVID-19.

One step at a time

Working as a bartender on the Las Vegas strip, Wall was used to being on his feet. After COVID-19, though, he could hardly even stand. Simple tasks left him breathless and exhausted.

While he was eager to get back to his active routine, his therapy team at Encompass Health Henderson started with realistic goals, such as walking with the assistance of parallel bars and standing and loading a dishwasher.

Wall was determined to regain his strength, but he admits at times it seemed impossible.

“When you can’t walk, even though people are telling you can because of muscle memory, you’re always thinking in the back of your mind that maybe I can’t,” said Wall of some of his therapy sessions. “From day one, though, they were like ‘you’re going to do this,’ and my third session, I remember Karmela had put me on the bars and had me stand.”

His therapist, Ya-Ting, instructed him to take a few steps without holding onto the bar when he felt comfortable. Knowing she was there to support him, Wall took his hands off the bars, and took his first step in weeks.

“It was overwhelming to know right then and there it was going to happen again,” he said. “The therapists being there and showing they cared, you knew it was not just about the job. That made things really incredible for me.”

During his 17-day stay at Encompass Health Henderson, Wall continued to achieve his goals. The simple tasks that seemed insurmountable to him when he entered the rehabilitation hospital were doable once again. He could eat on his own, brush his teeth and dress.

Two and a half months after contracting the virus, Wall was finally well enough to return home to his wife and children, whom he’d only seen through the window due to COVID visitor restrictions. After being in isolation so long, he said he was grateful for his nurses and the company of his care team.

“Everyone was so positive and so kind, and that interaction is a big part of the recuperation process,” he said. “Having that social interaction when no visitors could be there was a huge benefit.”

When it was time to leave, his care team joined him as he rang the bell that the staff uses to celebrate a patient’s recovery and return to independence. After ringing the bell, Wall achieved his final rehabilitation goal — he walked out of Encompass Health Henderson on his own, without the support of a walker.

Wall continues to stay in contact with his therapists and is setting new goals for himself. He still has some difficulty breathing and is taking blood thinners after having issues with clotting in his legs.

“My collapsed lungs have disappeared and the scarring is going away,” he said of his post-COVID-19 condition. “I still have some breathing issues, but I can do 25 push-ups at a time.”

He may not be back to where he was pre-COVID-19, but Wall said he feels fortunate. Doctors gave him a 6 percent chance of survival that first time he was put on a ventilator. Now, he’s walking two to four miles a day.