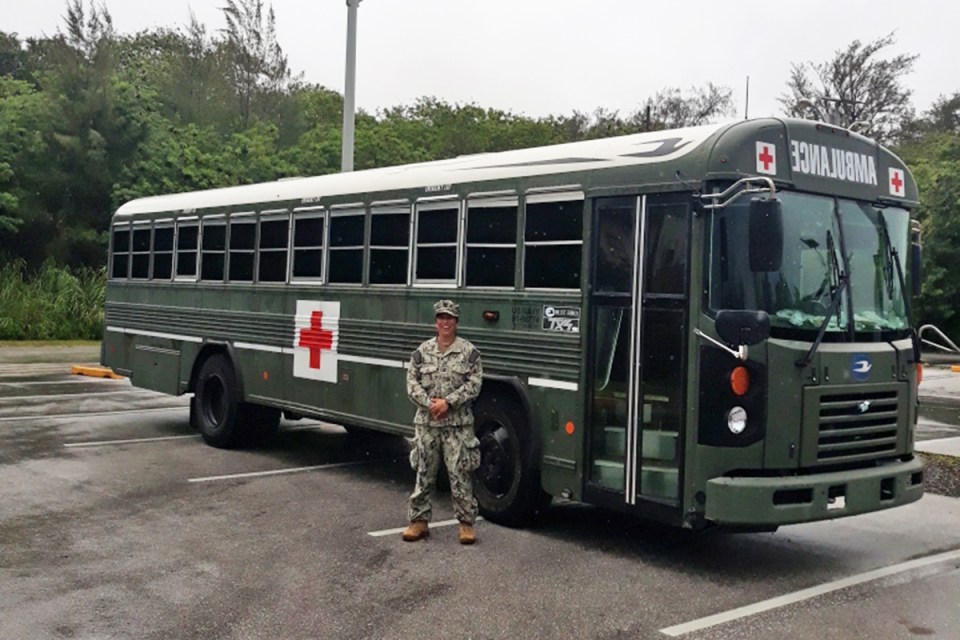 Denise Fernandez, hospice area manager for Encompass Health in San Antonio, Texas and respiratory therapist, is called to active duty in Guam to care for sailors who are impacted by COVID-19.

Throughout the COVID-19 pandemic, healthcare professionals have been on the front lines of care. But for Denise Fernandez, hospice area manager for Encompass Health in San Antonio, Texas, that took on a whole new meaning.

Fernandez began her career as a respiratory therapist 10 years ago working in the pediatrics wing of a local hospital. It wasn’t until she attended her high school reunion that she ever considered joining the Navy.

“I met some people who were telling me they had retired really early on in life – all from being in the Navy,” Fernandez said.

Intrigued, Fernandez decided to sign up for the Navy Reserves and was sent to boot camp at U.S. Naval Station Great Lakes – overlooking Lake Michigan. After completing boot camp, she then went to school to become a corpsman, which is an enlisted medical specialist in the Navy.

Fernandez was no stranger to active duty as she had previously served at Guantanamo Bay for 11 months. At the beginning of the COVID-19 pandemic, the Navy was in search of respiratory therapists to assist with the outbreak and Fernandez had a feeling she would be called to service once again.

And she was right – 16 hours later, Fernandez was informed she was being sent to Guam.

In the spring of 2020, the Navy aircraft carrier USS Theodore Roosevelt was on deployment in the Pacific Ocean when COVID-19 was detected on the ship. Affected crew members were evacuated and the ship was ordered to dock in Guam. That’s when Fernandez was called alongside other Navy medical personnel to care for sailors who were impacted by the virus.

“My gut reaction was that I didn’t want to go,” Fernandez said. “But I knew that I was needed now more than ever.”

Upon arrival in Guam, Fernandez was required to quarantine for 14 days. She then assisted in setting up an expeditionary medical facility in support of the USS Roosevelt outbreak. The makeshift, free-standing hospital included an operating room and intensive care unit, and was also able to provide dental and ancillary services to the sailors.

“There was about 180 people working at the facility,” said Fernandez. “This included nurses, physicians, corpsman and logistics personnel. We all slept in tents – but we did have our own barber!”

During her time on the island, Fernandez was able to experience how Guam was reacting to the pandemic.

“I was very impressed with all the precautions they were taking,” Fernandez said. “They had hand sanitizer stations outside of every business, and you had to wear a mask at all times. In grocery stores, you weren’t allowed to put your groceries on the belt until someone wiped it down. They even made you use hand sanitizer before and after you touched produce!”

In total, Fernandez spent 90 days in Guam and her team was able to care for over 800 sailors during their service.

“The island was beautiful and I really enjoyed my time there, but I was longing to be back working with our referral sources and hospice patients,” said Fernandez.

While the transition back home is always an adjustment, the pandemic made it a different experience than normal. Fernandez was required to do another 14-day quarantine and had to adjust to the different precautions the U.S. was taking in response to the virus.

Overall, Fernandez said she is grateful for the experience and has further realized the importance of good hygiene.

“As a respiratory therapist, you already have good hygiene, but this just reinforced it,” Fernandez said. “I’m a lot more conscious of what I touch and how many times I’m washing my hands each day.”

Most importantly, Fernandez is happy to be back helping hospice patients get the care they need.

“I’ve always been told that I would be perfect for hospice by the way I interact with people,” Fernandez said. “I think this experience has shown me just how much I enjoy what I do and appreciate that we can provide a better way to care to people every day.”