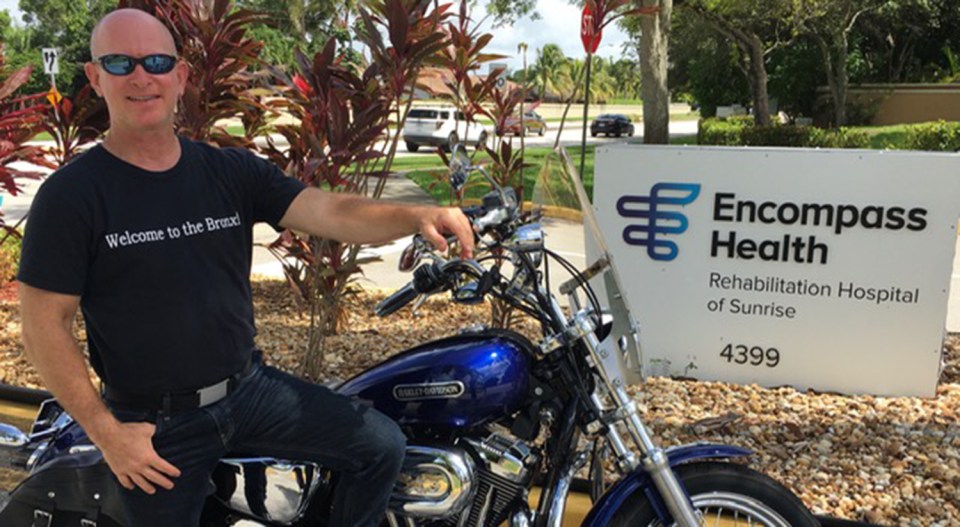 Brian Richman recovered from a motorcycle accident at Encompass Health Sunrise nearly 30 years ago. His therapists inspired him to become a physical therapist, and he now works at the hospital that treated him so many years ago.

Every time Brian Richman passes by patient room 222, he’s reminded of why he does what he does.

Richman is a physical therapist at Encompass Health Rehabilitation Hospital of Sunrise. Rewind some 30 years, and he was a patient at the Coral Springs Medical Center. In 1991, Richman was in a motorcycle accident.

Even though he was wearing a helmet, he suffered severe head injuries as well as a badly broken arm that, as Richman described, “was put back together with rods and screws.”

“Most of my functional limitations were from the head trauma,” Richman recalled. “Because of that, I couldn’t walk; I had no balance and had problems with my cranial nerves. I couldn’t swallow. I needed everything—physical therapy, occupational and speech.”

As his condition began to stabilize at the acute hospital—and it was clear he would survive—Richman was transferred from the acute care hospital to Encompass Health Sunrise, HealthSouth at the time, to receive intense therapy. It was during his stay in room 222 that Richman, an athlete and gymnastics coach at the time, would relearn to walk and eventually live independently again.

Prior to his accident, Richman was in top shape at age 26. He was a competitive gymnast at the University of Massachusetts at Amherst, as well as an alternate member on the USA team for the 1989 World Maccabiah Games. In addition to competing in collegiate gymnastics, he also did personal training on the side.

When he entered Encompass Health Sunrise, he couldn’t walk or perform even simple tasks.

“I had to relearn everything,” he said. “I remember right after the accident, they told my parents to start looking at long-term placement because they didn’t think I would live on my own. I had a lot of deficits from the severity of my concussion.”

Richman was highly motivated, though. Two days before his accident, he had accepted a job as a gymnastics coach at Radford University in Virginia.

His care team at Encompass Health Sunrise didn’t give up on him and helped Richman channel his inner athlete and competitive nature to recover.

He was in the brain injury unit at Encompass Health Sunrise for a month and also received outpatient therapy there.

While at Encompass Health Sunrise, he quickly connected with many of his therapists, as he learned they, too, were athletes.

“I befriended them and thought if I ever get back on my feet, I’d like to go back to school and become a physical therapist,” he said. “I wanted to help people like they helped me.”

Richman did get back on his feet, so much so that he was able to take that job at Radford University just six months after his accident. While he was coaching there, he took his prerequisites to get into a physical therapy program.

Coming back home again and again

Richman was accepted into a physical therapy program in the same Florida town where he had his accident.

“I returned to the scene of the crime for PT school,” he said. “When getting introduced to the professors, one was a therapist here at the hospital when I was a patient. She remembered me and even used my medical records in a case study during my program.”

Before completing his degree, Richman returned to Encompass Health Sunrise to complete his final clinical, but it would be 23 years later until he returned to work there fulltime.

After finishing school, Richman returned to Virginia, where he worked in various areas of therapy. When he decided to move back to Florida, he noticed there was an opening at Encompass Health Sunrise. He’s been with the hospital for about six months now. “It felt like coming home,” he said.

A page from his past

When his day takes him past room 222, Richman is quick to share his story with patients.

“I tell them, ‘See that room? That was my room,’ and tell them my story,” he said. “I think it keeps them motivated, that there is a light at the end of the tunnel. They’re not just stuck; there is light after an injury.”

Richman said he’s been living his fullest life since his accident 29 years ago. He said he never got back to the same physical shape he was in prior to his accident, but he did get back to those activities he loved most.

“I guess you could say I’m an adrenalin junkie,” he said. “I guess that’s why I chose gymnastics. I’m a certified scuba diver and have done rock climbing, repelling and skydiving, pretty much all of it.”

He also continues to ride his motorcycle to work every day, returning to the place that allowed him to do so once again so many years ago.