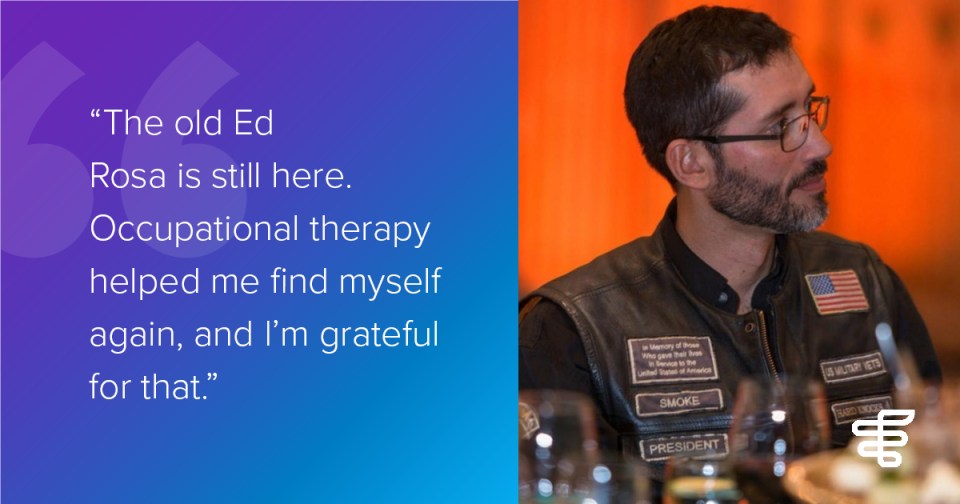 U.S. Army veteran Ed Rosa has always had a passion for service. He spent six years serving his country in the U.S. Army, and now serves as president of a North Georgia chapter of the U.S. Military Veterans Motorcycle Club, a non-profit organization that brings veterans of all military branches together and supports those in need.

His years of active duty taught him many lessons—perhaps the most important being how to solve problems under pressure.

“The Army taught me how to stay calm and assess the situation,” Rosa said. “It taught me to think rationally rather than exploding or getting upset.”

On July 4, the 43 year old was riding his motorcycle in the mountains of North Georgia when slick roads and dense fog led to an accident that should have claimed his life. Now, he’s taking that methodical, determined approach to problem solving and implementing it in his own recovery as he works to walk—and ride—again.

Because of the thick fog and wet roads that July night, Rosa was unable to see a turn warning sign and rode onto the rumble strip in the center of the road. The strip caught his front tire, forcing him into the oncoming traffic lane and causing him to collide with the guardrail on his left side. Unable to stop his motorcycle after the initial collision, Rosa then collided with a curve in the guardrail and was ejected from the bike.

Fortunately, a passing motorist witnessed the accident and called paramedics. Rosa was found roughly 27 feet down in a ravine against a tree.

“I’m lucky to be alive,” Rosa said. “If that guy wasn’t behind me, I’d have died on the side of that mountain.”

He was unable to be air lifted from the scene because of the fog. Paramedics transported him to a nearby hospital, giving him two units of blood along the way to keep him alive. Because of the nature of his injuries, he was then sent to Erlanger Hospital in Chattanooga, Tennessee, where he spent nine days in the intensive care unit.

During the accident, Rosa suffered spinal and leg dislocations and fractures and shattered his pelvis. His left hip was pushed through his back, and he also experienced severe nerve damage in his lower limbs.

“When I first spoke with my doctor about walking, I didn’t have any movement in my legs, feet or toes,” Rosa said. “He said he was hopeful, but couldn’t make any promises. I said ‘Doc, you don’t understand. I’m going to walk again.’”

Beginning his road to recovery

Two weeks later, Rosa got movement back in his toes, further solidifying his conviction that he would walk independently again. Before that could happen, though, his legs still needed to heal. He was referred to Encompass Health Rehabilitation of Chattanooga to begin his recovery and learn to live as independently as possible while unable to bear any weight on his legs as the bones and nerves recovered.

“He couldn’t stand or walk, so he had to learn to do everything from a wheelchair level and to use his upper body,” said Dave Krukowski, one of Rosa’s primary occupational therapists. “When he first got here, he had a lot of pain issues; he was hurting a lot. That wears on you.”

At the beginning of his stay, Rosa’s therapists helped him learn to safely transfer from the bed to a wheelchair, giving him the freedom to move around on his own for the first time in over a month. They also helped him find ways to manage his pain through methods like distraction and weight shifting, rather than medication.

“Getting in the wheelchair and being able to be mobile did a lot for my psyche—not having to stare at the wall 24/7,” he said. “Being able to go out to the patio and feel the sun on my skin for the first time felt so good.”

Rosa initially expected to spend a month at Encompass Health Chattanooga, but in only two weeks, he was able to discharge home—a testament to his determination and motivation to return to his family, his club, and most importantly, his 4-year-old son.

“He viewed everything as a challenge,” Krukowski said. “If he couldn’t do it this way, he was going to think of a different way to manage the task. He was pretty creative and clever, but still cautious.”

By the time he left the hospital, Rosa re-learned how to independently accomplish activities of daily living such as folding laundry and grabbing a cup of coffee—activities that seem small on the surface but had an invaluable impact on his mindset and confidence as he prepared to return home.

“The old Ed Rosa is still here,” he said. “Occupational therapy helped me find myself again, and I’m grateful for that.”

As Rosa’s nurses changed his bandages one final time before he discharged home, they got a surprise when they turned to look outside his window.

“It got really dark really fast,” Rosa laughed. “The nurses weren’t expecting to see a bunch of bikers clogging up the window and blocking the sunlight.”

Rosa’s brothers from the U.S. Military Veterans Motorcycle Club were there to accompany him home, leading the way out of the hospital and riding in formation for the two-hour drive to his vice president’s house, where he’s staying until his house can be modified for a wheelchair.

While his bones continue to heal, Rosa is continuing therapy at home and focusing on staying safe to prevent any further injuries that could delay his recovery. At a recent appointment, his surgeon gave him good news—his legs are healing more quickly than expected, and in a couple months, he may be able to begin bearing weight.

Despite the challenges and severe pain he has experienced, Rosa isn’t one for self-pity. Instead, he’s staying focused on all the positives on his journey that led to where he is now.

“I’m lucky,” Rosa said. “I was lucky that there was someone driving behind me to see the accident and call 911. I was lucky they were able to keep me alive on the way to the hospital because they had a hard time. I was lucky that when I got to Erlanger, I got the surgeons and doctors and nurses I got. At Encompass Health, I feel just as lucky to have gotten the nurses and therapists and teams there. I’m telling you, I’m the luckiest man on earth.”