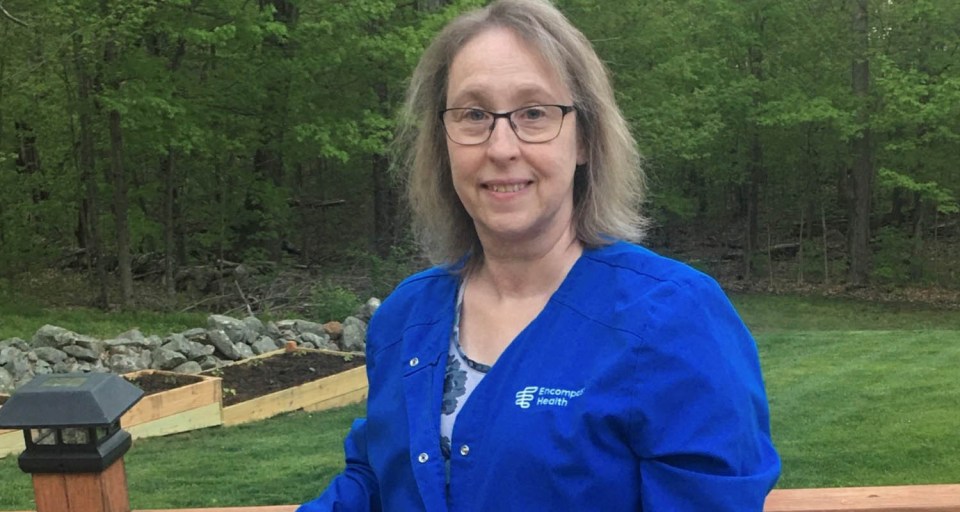 Encompass Health’s Theresa Johnson said her company and coworkers helped her throughout her battle with breast cancer.

Often times cancer patients who are in need of rehabilitative services will enter into our hospitals or receive home health treatment, but what happens when those helping treat the disease get sick themselves? When Theresa Johnson went in for a routine annual mammogram, she had no idea it would change her life forever.

Johnson, an OT with Encompass Health – Home Health in Worcester, MA who has been with Encompass Health for the past 12 years, learned that she was diagnosed with invasive lobular cancer in 2015. This form of cancer is the second most common type of breast cancer, and for Johnson it resulted in a double mastectomy.

“The decision to have the double mastectomy with reconstruction was truly the best decision I made,” she said. After receiving 20 weeks of chemo and 26 radiation treatments, she had her final treatment on Jan. 26, 2016, and the following month she began Tamoxifen to reduce the risk of re-occurrence.

Despite the uphill battle Johnson faced during this time, she wasn’t fighting it alone. “I am very grateful to have been working at Encompass Health when my cancer adventure started,” Johnson said. Being the primary breadwinner for her household, Johnson knew she could not let her diagnosis interfere with her career. She had just been promoted prior to her diagnosis, and she was determined to not let cancer get in the way of achieving her professional goals. Johnson was able to receive aid from the Encompass Cares program, which helped her and her family exponentially. Her fellow staff members and supervisors were also able to work with her to provide coverage for when she could not work and to allow her to work a flexible schedule in order to accommodate her treatments.

Johnson has been considered NED (no evidence of disease) since the end of her treatments in 2016, but still must see her medical oncologist every six months. During this difficult time she learned that positivity is truly a powerful thing, although it can be tough to remain positive during times of uncertainty. She is forever thankful for the support she received from her Encompass Health family throughout her diagnosis, treatments and recovery.