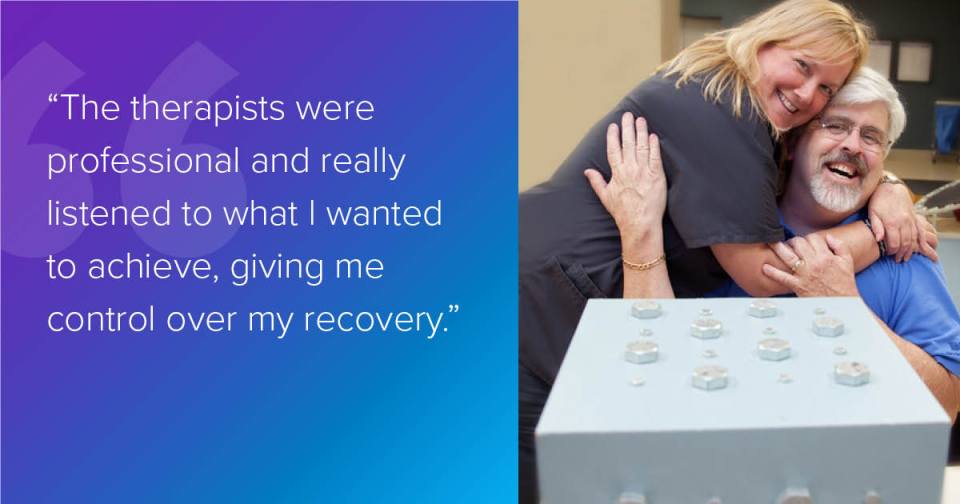 When his rental car door swung open hitting him in the head, Steve Zink thought nothing of the bump it left behind, until he was hospitalized weeks later for a severe brain bleed. After emergency surgery, he was sent to MidAmerica Rehabilitation Hospital for inpatient rehabilitation. He credits his therapy team for helping him get back to his life.

As the regional safety manager for dairy farms, Steve Zink traveled to production plants frequently and was no stranger to rental cars. Yet, on a routine business trip in August 2014, Steve was exiting his rental car when the door quickly came back toward him, hitting him in the head and knee. While his knee hurt from the impact, he didn’t give a second thought to his head.

However, over the next five weeks, Steve noticed a gradual decline in health. He would get confused and slur his speech. He also started falling asleep during meetings. One day he couldn’t even stand up from his chair at work. Soon after, he fell when getting out of bed. His wife, who worked in occupational medicine, called 911 immediately. A number of tests in the emergency room determined that the bump on his head was much more serious than he thought; Steve had a brain bleed and would need surgery right away.

An emergency craniotomy was performed to stop the bleed and relieve pressure on his brain. He spent four weeks in the acute hospital before he was ready for rehabilitation. Steve’s trauma surgeon recommended MidAmerica Rehabilitation Hospital.

When Steve arrived at MidAmerica Rehabilitation Hospital, he was bed-ridden and needed help just to sit up. During his planning meeting with his rehabilitation team, he remembered being told he could stay in a wheelchair, walk with a walker or cane, or return to regular walking.

It was all up to him.

“Steve became very motivated,” said one of his therapists. “On admission he said, ‘I’m leaving Friday,’ which was three days away!”

Steve remained extremely driven to get better so he could walk again and return to work. Initially he needed physical, occupational and speech therapies using advanced technologies such as Dynavision, a light-training reaction technology that works to improve visual, cognitive and motor function. Following his own “aggressive track” of rehabilitation, Steve was discharged home from MidAmerica Rehabilitation Hospital after 10 days, walking out of the hospital with a walker, which he only needed for one week. He participated in outpatient therapy for eight weeks and soon was able to return back to work.

“The therapists were professional and really listened to what I wanted to achieve, giving me control over my recovery,” Steve said. “They were all very encouraging and had very positive attitudes.”