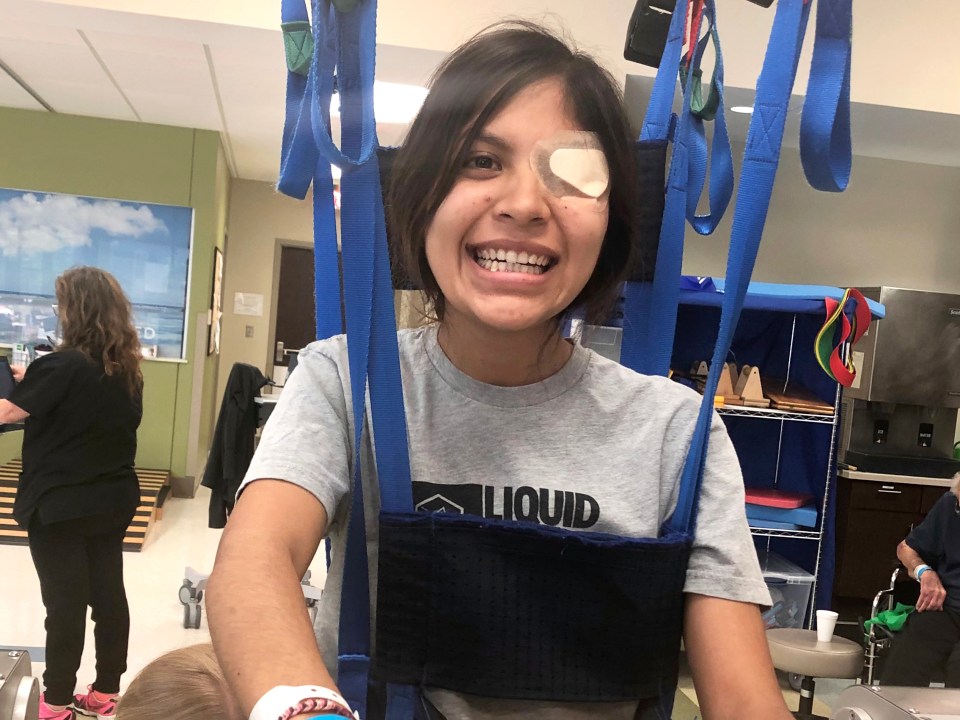 Steffany Quintana walks using the AutoAmbulator after experiencing a stroke at age 24.

Steffany Quintana had experienced panic attacks before. So often that when the 24 year old began feeling sick on April 18, she wasn’t overly concerned and attributed it to anxiety.

“I was living a completely normal life. I worked full-time, went to school full-time and was always on the go,” she said.

What she experienced that night, though, was not a panic attack at all, but rather a stroke that left her having to relearn how to walk, talk and swallow.

‘All I tasted was iron’

Familiar with anxiety attacks, when Quintana began feeling unwell, she attributed it to the stress of studying for college finals and for the LSAT. When she started to lose strength on her left side, her boyfriend encouraged her to call 911, but she still believed it to be another one of the episodes she had experienced in the past.

Then, she began vomiting.

“You know how blood tastes like iron? All I tasted was iron,” she said. “I asked my boyfriend if I had thrown up blood, but he said I hadn’t.”

After he helped her to the bed to lie down, Quintana’s left arm began to contract and she could no longer control her left hand. It was then that her boyfriend insisted she call the paramedics.

“They talked him through what to do to see if I had a stroke,” Quintana said. “When he asked me to smile, the left side of my face didn’t move.”

Once paramedics arrived, Quintana could no longer speak, and began vomiting again—this time she was vomiting blood. At that point, she knew that something very wrong was happening, most likely a stroke, as she had watched a documentary on a stroke survivor only days prior.

While in the ambulance on the way to the hospital, she remained focused, trying to avoid drifting into unconsciousness by counting backward from 100 repeatedly.

“I tried to calm myself down,” she said. “I didn’t want to fall asleep; I wanted to keep my mind moving.”

By the time she arrived at the hospital in Houston, doctors told Quintana’s family that she had experienced an intracranial hemorrhage, or acute bleeding inside the brain. Though the bleeding had stopped, she still had a large amount of swelling in her brain that was causing aphasia, dysphagia and loss of movement on her left side.

After seven days in the ICU, Quintana was deemed medically stable enough to be transferred to Encompass Heath Rehabilitation Hospital of Cypress to begin her recovery.

Though she was determined to progress as much—and as quickly—as possible, Quintana soon found that her stroke had also caused her to lose her ability to control her emotions. Coupled with the shock of her situation, while witnessing a discharge celebration at the hospital, where patients ring a bell to celebrate their success, Quintana was overcome with tears.

“The first day I came in, someone in the gym was ringing the bell,” she said. “I broke down crying. Elena Pugh, the director of therapy operations, had a long talk with me and told me that would be me soon.”

Her therapy team’s first priority was to get her used to being in an upright position. After laying for an extended period, the body can experience complication with blood pressure, said Kristy Johnson, a physical therapist who treated Quintana during her stay.

To help her relearn to walk, Quintana’s team made use of the AutoAmbulator, a treadmill-like device that allows patients to get in a standing position in a harness. Robotics assist the patient’s legs, simulating walking. Though she was skeptical of the equipment at first, she admits, soon she realized its purpose.

“I told my PT, ‘This is doing nothing but giving me a wedgie,’” she laughed. “Kristy kept repeating ‘Heal, toe’ to remind me how to move my feet. As time progressed, I noticed I was doing it on my own.”

Occupational therapy to help her regain fine motor skills took many forms, including arts and crafts, which she particularly enjoyed. To prepare her for a potential return to school, the team worked with her on walking with a backpack.

“I definitely came out stronger,” she said.

Getting Quintana into the AutoAmbulator as quickly as possible was a priority for Johnson, as they wanted her to begin bearing weight on her extremities as soon as possible. The device can also give patients a sense of security.

“Many patients who have had an experience like Steffany can feel very out of control while standing upright,” Johnson said. “The AutoAmbulator lets them feel secure in the harness, and they’re not standing with our help, but with the device.”

The robotic function of the legs is set to a patient’s unique step length. This not only retrains the brain on how to move properly, but also helps prevent any abnormal walking patterns from occurring.

One of her biggest goals, Quintana said, was to be able to eat whatever she wanted. She knew walking would come in time, but swallowing solid food was her top priority. She arrived at Encompass Health Cypress only able to eat thick liquids—which meant even Coke, her favorite, had to be thickened for her to consume. Speech language pathologists worked with Quintana to regain the ability to swallow, and to drink her first Coke since her stroke.

“Even if I had to learn to talk later, I wanted to eat whatever I wanted. All I wanted was a Coke—I cried over it,” she said. “I kept progressing until my swallowing was back to normal. Once I finally passed the swallow test, Sheila, the hospital CEO, brought me a Coke to celebrate.”

It’s mastering those day-to-day activities on your own that make a big difference in your confidence post stroke, Quintana said, from showering alone to regaining bowel and bladder control and no longer relying on diapers.  She was eager to do her own makeup again; it is a skill that she has almost mastered and continues to improve on every day.

“My sister was there with me the whole time,” Quintana said. “My occupational therapist was very adamant that my sister didn’t help me with things I was able to do on my own. It’s human nature to want to help, but I had to retrain my brain.”

Over the course of her time at Encompass Health, her team knew when to push her and when to comfort her, and taught her that she was capable of doing more than she thought.

“In the beginning, when we challenged her, she would break down when she wasn’t successful,” Johnson said. “That is commonly part of the grieving process after a stroke. Once she worked through that, she was coming to the gym asking, ‘Alright Kristy, what are you challenging me with today?’”

Her stay at Encompass Health Cypress taught her many things, she said, but most importantly, it taught her to be patient with herself and trust the plan put in place for her.

“When I was in the ICU, I was really scared for what rehabilitation was going to be,” Quintana said. “In the first two or three days, I was thinking, ‘Why am I here, this isn’t going to work.’ It did. Patience is everything.”