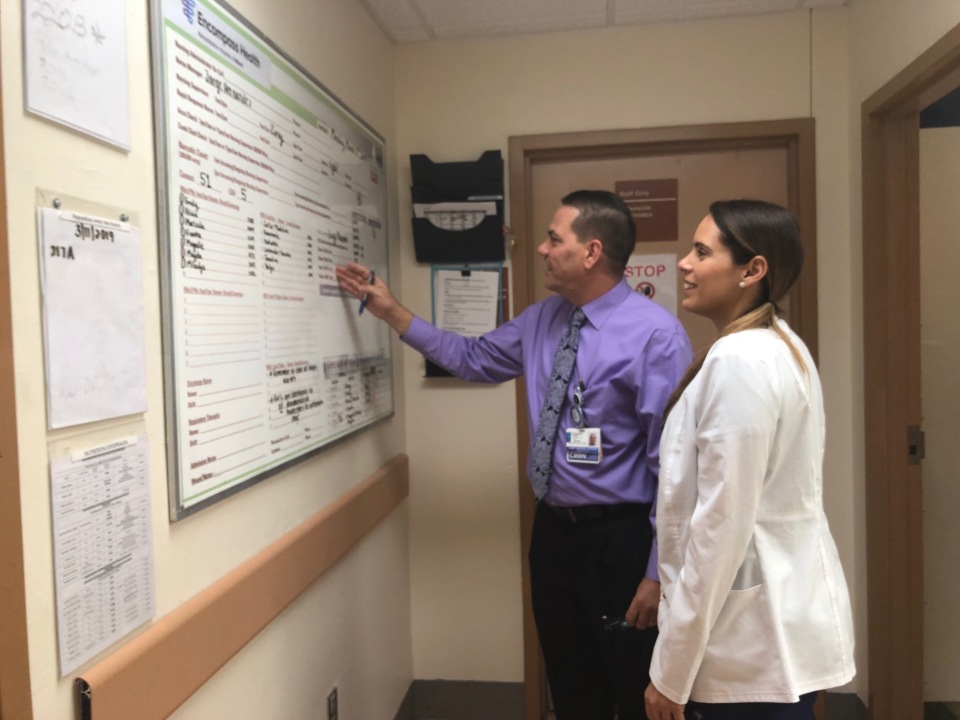 Rafael Alvarez Luis, the chief nursing officer at Encompass Health Rehabilitation Hospital of Miami, begins each work day the same—he logs onto his computer and pulls up his ReACT dashboard.

“ReACT” is the predictive model developed by Encompass Health in partnership with Cerner that identifies patients at-risk of an acute care transfer. Since being implemented companywide in 2017, Alvarez Luis said it’s changed the way he and his staff plan their days and care for their patients.

“It’s become a very important part of my morning,” he said of ReACT. “This basically lets us get ahead of a potential problem and get an action plan in place to try and prevent an acute care transfer.”

Encompass Health Miami was one of five hospitals in the Company to pilot the ReACT model in 2016. Dr. Lourdes Nunez, the hospital’s medical director, said it’s improved a lot since being implemented companywide, and it’s now an integral part of clinicians’ everyday work.

“Now, they automatically think of those tiers of ReACT,” she said. “That’s incorporated in every decision we make.”

The ReACT model was formulated based on analytical review of clinical data from 80,000 of the Company’s inpatient rehabilitation hospitals’ electronic medical records over a two-year period. Based on those records, 30 predictors of risk were identified statistically. Those predictors include appetite, vital signs, missed therapy, medications and more.

“This really gives them a hint, that something may be brewing,” Nunez said. “It gives us a flag and makes us look more in-depth.”

There are three levels of ReACT risk – low, high, and very high – that are updated through ACE IT, the Company’s  EMR system,  in near-real time to reflect a patient’s ReACT level as clinical results change.

Historically, patients’ classified as very high risk are six times more likely to transfer, so when Alvarez Luis notices a patient’s ReACT level has increased, he and his nursing team take action.

How clinicians are  “ReACTing”

At the beginning of each work day, Alvarez Luis reviews the patients classified at the highest level of   risk for an acute care transfer. He then alerts his team to prioritize these patients, visiting them first and rounding on them hourly.

A green “R” magnet is also placed on the high-risk patients’ doors, so all staff – not just clinicians – know the patient is at high risk of a transfer back to the acute hospital.

“We want to make everyone is aware,” Alvarez Luis said. “We want to figure out what happened to make them high risk.”

The nurses’ ReACT dashboard shows the predictors that placed a patient at an increased risk. They then are charged to do further clinical assessments in order to determine if and how a patient’s clinical status might  have triggered the high ReACT score  and how they might intervene to address clinical concerns identified and communicate with physicians.

Though nurses and physicians are the frontline users of ReACT, Encompass Health Miami hosts daily  meetings that include Alvarez Luis and Dr. Nunez, as well members of therapy, case management, nutrition, quality, and often the CEO, to address those patients  in the higher ReACT risk tiers.

Alvarez Luis said having the perspective of almost all the hospital’s departments helps his team further determine what clinical concern(s) placed the patient in that high risk category.

Meetings are also conducted every week to learn from acute care transfers that have occurred. “We go patient by patient,” Alvarez Luis said. “What happened. Why? We also look at if there was a transfer, what happened and what action plan can we put in place to potentially prevent it next time.”

How ReACT is improving processes

At Encompass Health Miami, it’s all about learning – from ReACT, as well as any transfers back to the acute care hospital that do occur.

For instance, Alvarez Luis said they’ve found many patients who missed therapy – a predictor of increased risk for acute care transfer – were in pain.

“Well why? We have medication here, but many come from the acute care where they had IVs,” he said. “Here, it’s oral, no IVs. Now, we’re making sure they know that. We’re having our liaisons let them know that before admission.”

Alvarez Luis and Nunez agree that the predictive model is one more tool they can use to benefit patients.

Having ReACT helps Alvarez Luis and his nursing staff prioritize their day to circumvent a disruptive and costly acute care transfer, but more importantly to keep the patients on track and in therapy, so they are able to reach their goals in anticipation of going home.