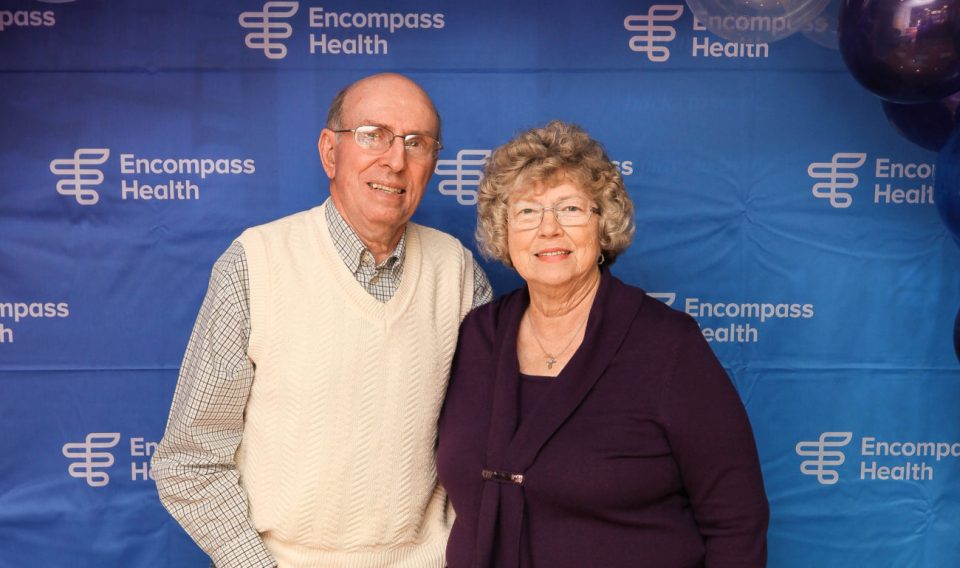 Fred Ware and his wife

Fred Ware was in his front yard picking blackberries on July 1, 2002, when he started to get dizzy. He stood up but the dizziness did not fade, so he tried to walk inside. The quick-onset dizziness Fred was experiencing is a common and quick acting symptom of a stroke.

“Going to [Encompass Health North Memphis] was the best move I ever made,” said Fred. He spoke about the positive attitude of the staff and the patients. “We encouraged each other,” Fred explained, “We would go down to the gym and every time one of the patients did something well, we all would applaud.”

There was one moment that Fred explicitly remembers. While he was walking with assistance on the parallel bars, his knee locked up. When he looked over to his therapist, she was crying. When Fred asked why she was crying, she responded with, “Your knee locked up, you are going to walk again.” Then Fred realized that all of his hard work was coming to fruition and started to tear up as well.

Fred now regularly attends the stroke support group meetings at his local hospital. He shares his story and reminds people there is life after stroke and you can get better. He hopes to reach people who are going through what he experienced and to tell them, “You are a survivor and not a victim.”

For people who are going through stroke rehabilitation, Fred has a couple words of encouragement. “You were a part of the world before your stroke and you are still part after. Don’t just stay inside. I would go to Kroger and use the shopping cart for support and just walk around the aisles.” He also added that there is so much negativity in the world today and urges people to just be positive.

While in rehabilitation, Fred’s two goals were to hug his wife and know he was doing it, and return to fishing. Now, he is exercising five hours a day, five days a week and is grateful to hug his wife again. Somehow, he is still finding time to squeeze in bass fishing on the weekends.