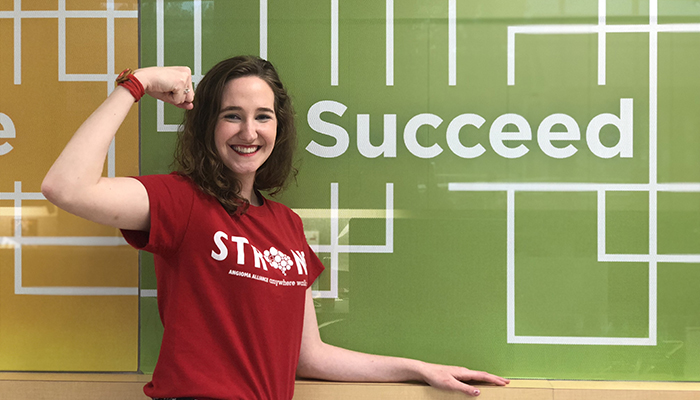 After experiencing a stroke during college, Taylor TerBurgh was able to get back to the books at Encompass Health Rehabilitation Hospital of North Memphis.

College student Taylor TerBurgh recovers from a stroke with the help of Encompass Health Rehabilitation Hospital of North Memphis, a partner of Methodist Healthcare.

In the summer of 2014, Taylor TerBurgh was passing her time as most other new high-school graduates do—preparing for college. When she began experiencing ringing in her ears, numbness in her fingers and a “stuffy head,” Taylor—and her doctor—thought little of it.

“I went to the doctor, and they told me it was more than likely just a side effect of the meningitis shot I got to live in the dorm in college,” she said. “Hindsight is 20/20, but I actually had a stroke.”

Her symptoms went away after a few weeks and Taylor went away to college, heading to The University of Memphis to study marketing on scholarship. She spent two years symptom-free, but during the beginning of her junior year, the stuffiness, ringing ears and numbness returned. The symptoms worsened, and a trip to the emergency room revealed a shocking diagnosis.

Taylor had a cavernoma, an abnormal cluster of blood vessels in the brain. The mass had bled, but as it was located on her brainstem, her neurosurgeon opted to monitor the mass rather than risk surgery. This time, though, the symptoms didn’t go away. Days later, the cavernoma hemorrhaged again and surgery was her only option.

“I was beginning to cognitively decline very quickly,” she explained. “I was a 20-year-old college student who had above a 3.0 GPA, and all of a sudden, could only focus on apple juice. When my neurosurgeon was talking through all the risks, all I asked was when I could have something to drink.”

Taylor underwent a six-hour surgery to successfully remove the raspberry-sized mass, but the removal resulted in balance issues. After two weeks in the acute-care hospital, Taylor was discharged to Encompass Health of North Memphis to regain her equilibrium and her independence.

“I lived alone; I was driving; I was living my life as a regular 20-year-old, and all of a sudden I wasn’t,” she said. “Encompass Health of North Memphis helped me set goals for myself that I could achieve. My goal was I wanted to live by myself again, to be able to go up and down stairs and play tennis again.”

After two weeks of rehabilitation, Taylor left Encompass Health in October 2016. By the following January, she was back in school, missing only a semester’s worth of course-work.

“You’re not just a patient,” Taylor said. “Your team knows you and your challenges and victories, and remembers you after long after you leave.”