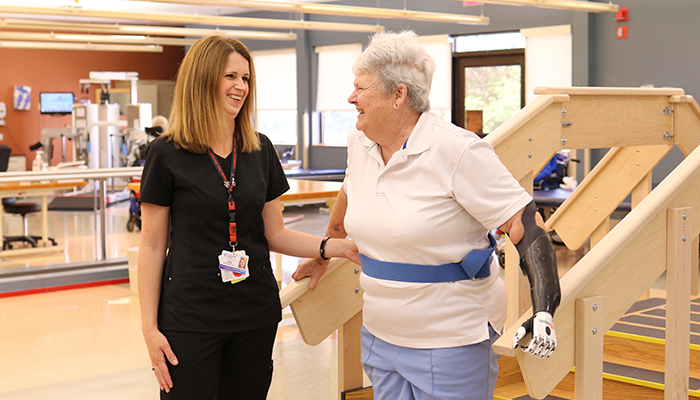 After contracting sepsis, Gayle Fisk lost both hands and both legs below the knee.

When Gayle Fisk lost everything, she never gave up. An endless source of hope and optimism, Gayle discovered a new family at Encompass Health Rehabilitation Hospital of San Antonio and is living life to the fullest.

Gayle Fisk and her husband were no strangers to change. At the age of 69, she and her husband spent each day seeking out new adventures. They played golf three times a week, and had recently traveled to Claire Cross, Canada and had even stopped in Chicago to catch a few baseball games while they were passing through. But on a particularly routine morning for Gayle in the comfort of her home, life changed in an instant.

“I woke up that morning, I was going to mow. I felt fine. Then all of a sudden, it’s like I either had the flu bug that hit all of a sudden, or I had food poisoning. It started at nine that morning, he [Gayle’s husband] had me at my doctor at noon. I was in ER before one, and my doctor told him if he had waited more than two hours, I wouldn’t be here,” Gayle said.

“I contracted sepsis… I lost both lower limbs below the knee, my left hand to my wrist and what you see of my right hand here,” Gayle explained as she held up her hand to show her amputated fingers, and partially amputated thumb.

For Gayle, it hit quickly, and it was the hardest trial of her life.

“They prevent the blood flow to your extremities, they keep the rest of your organs going. I have no memory basically for about six weeks,” Gayle said. “I spent three weeks in the ICU at an acute care hospital here in San Antonio, and I was transferred to St. Luke’s to be amputated. I was amputated Dec. 1, 2016. I spent one week at St. Luke’s, and was sent to a rehabilitation hospital until Christmas Eve. Then I was transferred here to [Encompass Health Rehabilitation Hospital of San Antonio]. I made a lot of friends, as you probably all noticed, I’m getting a lot of hugs from everybody in here and I haven’t been in here since April of last year.”

Gayle is a force of unrelenting optimism, and she refused to let her situation define her. But that didn’t mean she did it alone.

“It’s a mind-blower. And when you’re 70 years of age and you’re learning to walk again, learning to write, and learning to eat. It is… It takes a toll on you. Physically and mentally,” she said, pausing to wipe tears from her eyes.

“I still get emotional about it. But this place, I can’t tell you how appreciative I am of the people here and the work they did with me. From the nurses to the physical therapists to the occupational therapists. I mean, they’re just uplifting of spirits. There was constantly somebody who was there to help you. Whether you needed it emotionally, whether you needed it physically. Whether it was to get you in the shower, whether it was to get you out of bed… Somebody was there. And it was just a blessing to be here.”

“I’m going to get back on the golf course! I miss it. I still do things for the group that I’m capable of doing. I am their tournament chair. But I am going to be out there on the course again playing with them. I’ve already got a pro in town who will work with me, and teach me how to re-swing on legs that don’t move exactly like normal legs do. And with an adaptive device on this arm, be able to swing a club. I got to do that 10 days ago at one of the places here in town… I actually hit a golf ball with a club! Which was great, it was just fantastic,” said Gayle.

“The pro I’m talking about, he hadn’t seen me since they had a golf tournament for me to raise funds to cover some of my expenses that Medicare doesn’t cover and I walked in and he broke down in tears. He said, ‘I didn’t think I’d ever see you like this!’ and I said, ‘Yeah, and you’ve made me a promise!’ And he said, ‘Yes, I did!’ So anyways, I will go to him as soon as I can get my balance straightened out on these new microprocessors. I’m not quite…. I’m steadier than I was on the pins! But I’m not there yet.”