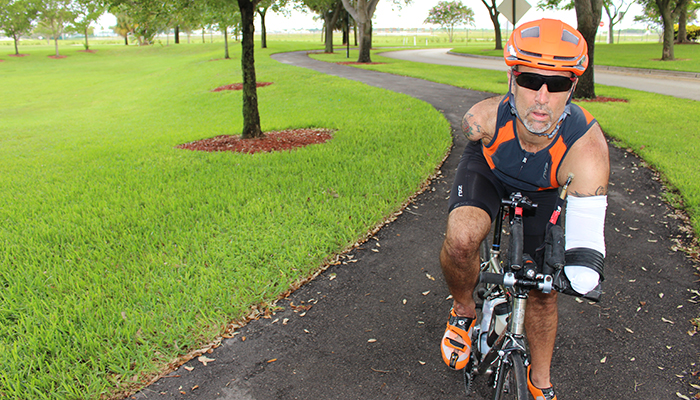 Bilateral amputee Hector Picard proves time and again that with a little creativity and a lot of persistence he can compete with some of the world’s best athletes.

As Cheryl Miller approached the finish line of her first triathlon, she was overcome with a sense of pride. It wasn’t as much about completing the grueling three-part competition, though, as it was the familiar face she spotted along the final stretch.

Cheryl, who has a doctorate in occupational therapy and serves as Encompass Health’s vice president of therapy operations, saw her former patient, Hector Picard, running in the crowd with her.

“I was running the home stretch of a triathlon, and I was like, ‘Oh my gosh, that’s Hector,’” she recalled. “It’s kind of like everything came full circle.”

That was about seven years ago in Fort Lauderdale, Florida, and some 25 years since Cheryl was first introduced to Hector, a bilateral amputee.

Hector lost both his arms – the right one at his shoulder and the left just below his elbow  joint – in 1992. The then 25 year old was apprenticing for an electrician when more than 13,000 volts of electricity surged through his body twice. In addition to losing both arms, he had multiple burns on his body and was in a coma for a month.

The accident occurred in March 1992, and he was moved to Encompass Health Sunrise Rehabilitation Hospital in Florida the following August. Cheryl had been working as an occupational therapist for almost a decade at the time, but lacked experience, she said, with cases as severe as Hector’s.

“I’d had a lot of upper extremity cases, but a bilateral electrocution … we just weren’t sure what the damage would be from the electrical shock,” she said.

Hector was determined from the start, though, so it’s no surprise that since that triathlon seven years ago, he has competed in many more – upwards of 120 . He was the first double-arm amputee to compete in an Ironman, the longest of the triathlons covering a total distance of 140.6 miles. Now he has four under his belt, the most recent being the Ironman World Championship in Hawaii. He was unable to finish that one, but like most challenges he’s faced, he won’t let it deter him.

Cheryl said you just have to consider where Hector was when he entered Encompass Health Sunrise in 1992, to understand that he truly is the ultimate ironman.

The Road to Recovery

Hector doesn’t recall much of the accident that took his arms, but he remembers waking to find he had little to no control of his body.

He then thought of his 1-year-old daughter and his wife, and knew he had to get that control back.

“I saw my daughter, and I wanted to be there for her and for my wife at the time,” Hector said. “I didn’t want her to have to take me to the bathroom and feed me and do all those things; that I couldn’t take. I had to learn to do all those things.”

His wounds were still healing, so he couldn’t immediately be fitted for a prosthetic. In the meantime, Cheryl started helping Hector with simple tasks.

“He’s an interesting guy,” she said. “He was problem-solving from the beginning. He wanted to get things done.”

Little by little, Cheryl helped him regain control of his environment.

She adapted his phone, so he could talk to his wife privately. Then, she moved to hygiene and simple self-care.

Cheryl recalls standing in front of her bathroom mirror at night holding a toothbrush in the crook of her arm. “I wanted to experience brushing my teeth without hands,” she said.  “I learned a better way later.”

A Universal Cuff, a sleeve used to help those with limited hand strength, was adapted for his arm, enabling him to brush his teeth and eat with utensils.

Once his wounds were adequately healed, they began working with prosthetics.

Slowly he was regaining the ability to perform everyday tasks, and some seven months after his accident, Hector returned home.

Cheryl helped get him situated in an apartment, making sure he could reach the cabinets and help with the baby and other household chores.

Hector said his road to recovery was tough, but he was determined to make it happen.

“I was a husband who helped around the house, so that’s what I needed to do,” he said. “I needed to help with the dishes, laundry and vacuuming. It was tough, but little by little I learned how to do things differently.”

Prior to his accident, Hector describe himself as an active person. He played team sports. He loved basketball. However, running wasn’t his thing, and triathlons never crossed his mind.

Once his wounds healed, Hector became even more determined to do the activities he once enjoyed. With the help of his dad, he modified a bucket to create a device that allowed him to shoot hoops again. It was later refined by TRS, Inc., an innovative prosthetics manufacturing company, and is sold on the market as the HP Hoopster.

When his daughter started playing Little League softball at age 6, she again prompted Hector to action.

“I would watch her out there, and tell myself she didn’t care that I wasn’t out there; she had a smile ear-to-ear,” Hector said. “Inside, though, it was killing me. All the other dads were out there helping their daughters.”

Hector created a couple of other devices that allowed him to pitch and hit, and soon he was on the field, too, helping his daughter. He even coached her team, and his little girl grew to become one of the best hitters in her league.

It had been more than a decade since the accident, and by all appearances, Hector had gotten back his life. He was working in real estate and active in sports. Then, in 2009, his life took another dramatic turn. His marriage was troubled, and the couple divorced.

Hector said after that, sports became more than a pastime. Pushing his limits and endurance became therapy, which led him to triathlons.

Hector again would have to find ways to adapt for these grueling competitions. He started swimming with fins, but that proved ineffective for him. Now he does what he describes as a reverse breast stroke on his back to complete the swim, which is the first competition of the triathlon.

Next comes the bike ride. Hector has a custom bike that allows him to steer using the remaining part of his left arm and break with his knee.

The last part of the race is the run. Hector doesn’t require any special adaptations for this, but he says it’s the most difficult and his least favorite.

“I’ve never been a runner; I don’t like it,” he said. “What happens in my case is I’ve been using just my legs for the swim and bike. This makes my legs extra tired for the run.”

That hasn’t stopped him, though. Now, over the age 50, he’s competing more than ever, and says he’ll continue to, as long as he enjoys it.

Today, Hector is a professional triathlete, sponsored by Novation Settlement Solutions, and a motivational speaker. He founded DontStopLiving.org, a resource and support system for those going through difficult times both physically and emotionally.

He has remarried – he met wife Wendy on Match.com – and has two children, two stepchildren and three grandchildren.

Hector is quick to use his determination to help others. He biked across the nation to raise money for prosthetics for a baby born without hands, and he teamed up with Broward Children’s Center in Pompano Beach, Florida, which helps children with special needs, to raise money and awareness for the center and its patients.

His triathlons and speaking engagements have taken him all over the world, though he still calls Florida home, and his disability has inspired many.

Hector is unsure where he would be had the accident not taken his arms in 1992, but he’s happy in the place he is now, and he is thankful for all those who helped him along the way.

“I’m so appreciative of healthcare providers, and the relationship I have with Cheryl is priceless,” he said. “She gave me the confidence to know I could do these things on my own.”

Cheryl said she, too, is thankful she got to be part of Hector’s recovery and transformation. She said her goal, as an occupational therapist, was to get Hector back to his occupation. With some creativity and lots of hard work, Hector managed to do that, and then some.

“We go into this field to change lives,” Cheryl said. “To see lives actually change … it kind of all comes full circle. This is a rewarding role we play, but it’s stories like Hector’s that make it so meaningful. Our whole profession is about participation in meaningful occupations. Hector is the definition of that.”

How he does it

As a double-arm amputee triathlete, Hector Picard has learned to adapt to each of the competitions that make up the race. He doesn’t use a handler, who could help him with transitions to the different stages of the race, with the exception of the Ironman World Championship in Kona, Hawaii. He’s gotten pretty good at the swim over the years, Hector said. However, the bike is his favorite, and though running requires the least adaptations, it’s still his least favorite. Below is a look at how Hector tackles the triathlon.

Hector tried swimming with fins at first, but they kept falling off. Now, he swims on his back, using his legs like a frog, doing what he refers to as a reverse breast stroke. He said he tries to find a comfortable stroke that he can stay with for the entire swim.

Hector doesn’t ride with a prosthetic. Instead, his bike has a PVC sleeve for left arm to control the bike. He uses his right knee to break, and an electric tube he can move with his chin activates the different gears. Keeping cool is an issue on long rides, so the bike has a hydration system allowing him to drink through a straw. He has to stop for nutrition, where he either eats on his own or gets assistance if help is available. He changes the tires himself using his feet (Check out a video on YouTube).

With Hector using only his legs for the swim and the bike, it’s no surprise the run is trying for him. With third-degree burns on more than half his body and the loss of both his arms, he has trouble cooling. He has ice dumped over him throughout the run when possible, and he makes sure to drink and eat at every fueling and hydration station on the course.