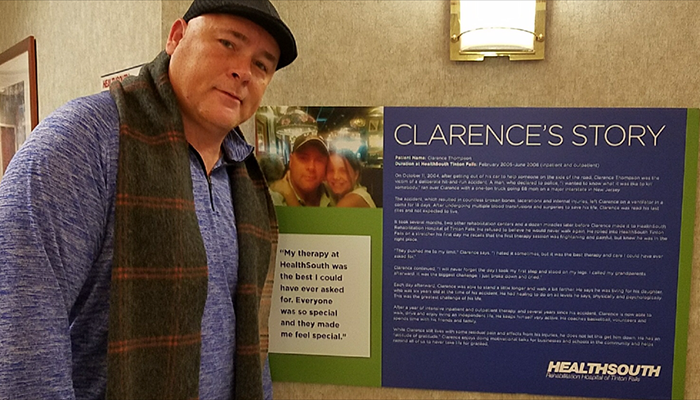 Traces of Clarence Thompson’s near-death experience some 14 years ago aren’t evident at first.

But when the former basketball star removes his signature cap, remnants of the accident that almost took his life are revealed. The deep scar on the back of his head is from the windshield wiper; the jagged dent on the top is where his head collided with the light post.

In October 2004, Clarence was struck by a one-ton truck as he was walking along the side of  the New Jersey Turnpike. He was propelled 26 feet in the air, the truck never slowing from its 68 mph speed.

Despite his broken body – in addition to a broken neck, back and ribs, he also had a collapsed lung, ruptured spleen and a shattered tibia – Clarence didn’t die that day. It was a long road to recovery, though; one that multiple caregivers ensured him he would never walk.

“The eyewitnesses chased the driver,” Clarence said. “They didn’t even look at me because they didn’t think there was any way I could have survived. They assumed I was dead.”

Clarence’s heart did stop briefly, but rescue workers resuscitated him. At the hospital, he was given less than 36 hours to live, and a priest was called to read his last rites, but Clarence wasn’t giving up.

He underwent 11 surgeries and was in a coma for 16 days. Months later, he was transferred to the first of several rehabilitation facilities. There, he was all but told to give up hope of ever walking again or getting back a trace of his life before, one where he was a local basketball star and an active dad, working for a bridge building company. “They told me this was my new reality; get used to it.” Clarence recalled.

He had all but accepted that fate, but then a simple gift from his daughter changed his determination and ultimately his destiny.

“I thank God for my daughter,” Clarence said. “She was 7 at the time, and she had bought me this bracelet with her own money. It had the words ‘courage, hope, faith and strength’ on it.”

Those four words became a mantra for Clarence, and eventually he regained all of them, starting with the courage that he received from his clinicians at Encompass Health Rehabilitation Hospital of Tinton Falls.

The courage to hope

In an effort to get closer to home, Clarence transferred to the New Jersey hospital. Based on his previous experiences, his expectations were low. The last hospital he was in kept him in an opioid haze, he added.

“I was very leery, skeptical,” Clarence said. “They were so professional, though. From the therapists to the nurses and the janitors and cooks, they all gave me courage, and with that courage, I started to hope, hope that I could really get better.”

Slowly but surely, Clarence did begin to get better, bypassing goals his former clinicians told him he would never achieve. He remembers one turning point vividly.

A local TV crew was coming to interview him – Clarence had been a basketball great at Oral Roberts University and briefly played professional ball. News of his tragic accident and miraculous recovery had spread.

When the reporter asked if he could stand, Clarence pushed himself up, and though wobbly on his feet, he wadded up a piece of paper and shot it into a garbage can, his aim spot on, but that’s not what inspired him.

“In my peripheral vision I see this man in his 60s trying to clap,” he said. “Here’s this guy who probably will never be able to do anything on his own, and he’s cheering for me.”

That simple gesture gave Clarence the encouragement he needed to work harder and regain those last two words engraved on the bracelet his daughter gave him.

Building the faith to regain strength

At that moment, Clarence vowed he would walk again.

Over the next several months, he continued to push himself in therapy, noting that the one-on-one attention he received at Encompass Health Tinton Falls was paramount to his success.

With each small achievement, from standing longer and longer to walking his first steps, his faith that he would one day regain some of the independence he had before the accident grew.

After his discharge from Encompass Health Tinton Falls, he moved into a nearby apartment, so he could continue  with outpatient therapy at the hospital.

“As I continued to progress by leaps and bounds I developed that last word – strength,” Clarence said. “I now had the strength to continue to get better and better.”

In all, he was in rehabilitation more than a year. He was walking more and more, but still largely relied on a wheelchair.

Though he had made major progress since the day he was struck by the 1-ton truck, Clarence had little hope that he’d ever be involved in sports again, that is until an old friend contacted him about a troubled girls basketball team that needed a coach and maybe a little inspiration, too. Clarence didn’t think a guy in a wheelchair would invoke that, but he quickly learned he was wrong. Truth be told, he reflected, they inspired each other.

“I didn’t want to do it at first,” said Clarence of the coaching opportunity. “Finally, I said I would. Little by little, as I got better, the team got better.”

That team went on to win three state championships under Clarence’s leadership. It also witnessed Clarence using his wheelchair less and less on the sidelines as he regained the strength he needed to walk again.

Even though his left leg is still partially paralyzed, Clarence no longer uses a wheelchair.

His pace may be a little slower than before the accident, but it’s steady and strong.

He’s not sure where his life would have taken him had that truck not plowed him down that October day more than a decade ago, but he’s confident he’s stronger than before, which after regaining his courage, hope, faith and strength, has become a new mantra for him.

Today, Clarence is still involved with sports – he coaches a pro-am team in New Jersey – but he spends most of his time sharing the story of his long road to recovery that he is quick to point out, he did in fact walk.

He hopes his experience will inspire others to overcome their obstacles, even in the face of naysayers.

It was those naysayers that gave him the determination to overcome his – them and his caregivers at Encompass Health Tinton Falls, Clarence added.

Since leaving the hospital, Clarence has become a sort spokesperson for it, sharing his successes with current patients, as well as the community.

A documentary of his life and miraculous recovery is in the works, he said, and he hopes to begin a national speaking tour in the near future.

“I want to inspire all walks of life,” Clarence said. “Nobody knows how I survived. The final conclusion was mind over matter. When they told me I would never walk, I knew I would. I just try to move forward every day.”

The scars that now cover his body are a constant reminder of his near-death accident, but he said the real story is his determination to get better and the assistance he received from his Encompass Health Tinton Falls team.