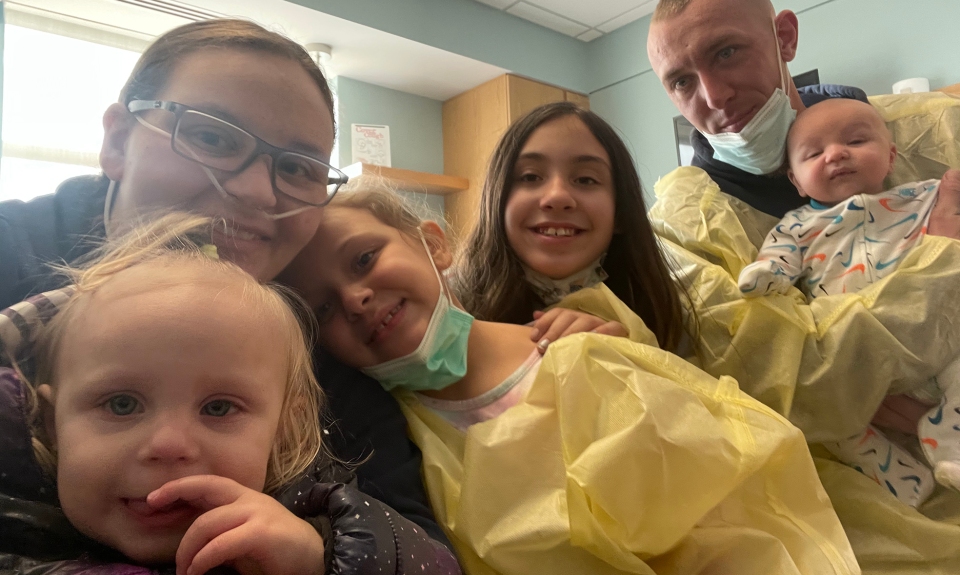 When Kelli Morrison arrived at Van Matre Encompass Health Rehabilitation Institute, she could barely lift her arms or get out of bed. Six days later, she was ready to walk out of the hospital and return home for the first time in months—just in time for the holidays.

Two months before she came to Encompass, Morrison was expecting her fourth child. She went into labor Oct. 11, right on time, and everything was going as expected until the hospital performed a routine COVID-19 test.

“When it came back positive, I was shocked,” she recalled. “I thought, it is what it is. I had a little congestion, but that was it. I had a C-section, and everything was good.”

Morrison returned home with her newborn son days later. Within 24 hours, though, she was so weak she could hardly stand.

When Morrison began to have difficulty breathing, she was admitted to the hospital again.

“I was so weak, I couldn’t fight the COVID,” she said.

Though healthy at 26, Morrison has a blood clotting disorder and asthma, making her more vulnerable to the virus. Her doctors put her on oxygen, but it wasn’t enough to stabilize her breathing. Morrison was transferred to the ICU. She thought she would only be there a few days. A few days turned into weeks.

She was put on a ventilator and remained on it for 21 days. She doesn’t remember much during that time, except for the vivid nightmares.

“They were really crazy nightmares, and really real to me,” she said. “I was fighting the sedation. Every time they tried to take me off the ventilator my heart rate started going crazy.”

A Safe Setting to Recover

After being hospitalized for nearly 50 days, Morrison was transferred to Van Matre Encompass Health. She was weak and couldn’t walk on her own, but she was motivated to recover and regain her independence. It was December, and she wanted to be home for her newborn son’s first Christmas and be with her three other children and husband.

While she wanted to be home, she also needed to be in a safe setting to regain her strength. As a rehabilitation hospital, Van Matre Encompass Health has round-the-clock nursing and frequent physician visits. She also had therapy three hours a day to help her build back her strength and relearn daily activities after her long hospital stay.

“I always felt so safe here,” she said. “This is a controlled environment. They’re not going to let you fall. If they felt I couldn’t handle something, they would grab a second person to help me. It sounds weird, but they push you politely.”

Home by the Holidays

Six days after arriving at Van Matre Encompass Health, Morrison was strong enough to return home, exactly one week before Christmas. Though she said her lungs are still damaged from COVID-19, she was able to come off oxygen and is looking forward to a quiet holiday at home with her family.

When Morrison left the rehabilitation hospital, she was walking on her own and she could not only hold her newborn baby, but could also pick him up—something she couldn’t even imagine doing a few days before.

“I can actually lift him and my 19-month-old daughter. That was one of my goals,” she said. “Another was to go up stairs; I can do that, too. Another was to get up and down from the floor because that’s where I spend my time with the little ones. I know it sounds silly to everybody else, but these were things I couldn’t do after COVID.”

It’s those little things Morrison is looking forward to most this holiday season.

“We’re going to stay home and drink hot chocolate,” she said. “I’m going to spend time with the six of us.”