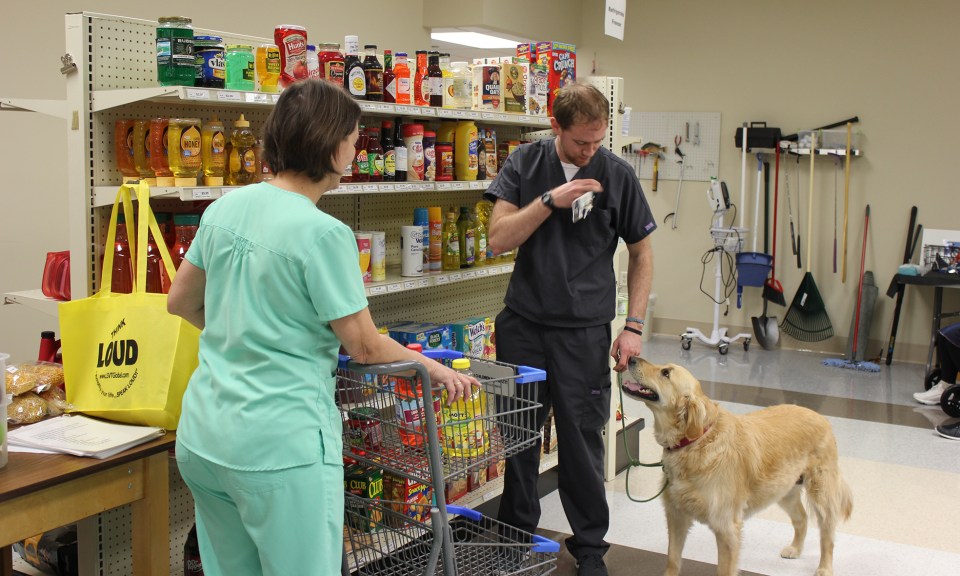 A plaque inside Encompass Health Rehabilitation Hospital, a partner of Washington Regional, in Fayetteville, Arkansas, memorializes one of its longtime employees. For some five years, Ember spent her days working with patients in the therapy gym, helping them grow stronger and more confident after a serious injury or illness. Ember was no ordinary employee, though. The golden retriever was an animal assisted therapy (AAT) dog. While she enjoyed the extra cuddles and treats she received at the rehabilitation hospital, she was there to work—she even had a name badge.

“She never got a paycheck, but she was an employee,” said handler and constant companion Cody Newton, a senior occupational therapist at Encompass Health. “There’s a difference between a therapy dog, and an animal assisted therapy dog. A therapy dog is volunteer; animal-assisted therapy is in a professional setting and is goal driven.”

Ember passed over the rainbow bridge just over a year ago, but the impact she had on patients and staff will not be forgotten. As an AAT dog, she played a role in helping patients recover, and she did it in a non-judgmental way that only a dog can do.

Pet therapy has become common in healthcare, but AAT is still gaining ground. While many consider them one and the same, Newton said they are distinctly different. Both require extensive training and certification for the pet and the handler. However, pet therapy is about bringing comfort and the unconditional love of animals; AAT does that, too, but it’s also about helping people achieve their goals.

With Ember, Newton would meet with patients and discuss what they wanted to achieve. He would then customize therapy with the patient and Ember to help them reach their goals. For example, if a stroke patient was experiencing right-side weakness, he would have them play fetch with Ember using their right hand to throw.

“This is not just petting and loving on the dog,” he said. “We work on specific goals and tasks. They can stand up and walk her, or if they need to work on balance, I could have them bend down and pick up a ball to throw to Ember.”

Another distinct difference, Newton said, is that AAT takes place in a professional setting and is not volunteer based, as pet therapy is. Pet therapy animals visit facilities as guests. Ember was considered a part of the staff at Encompass Health in Fayetteville, Arkansas. She came to work with Newton on scheduled days, and saw patients during therapy hours, just as other clinicians do.

What Training Does It Require?

Newton always had dogs growing up, so when he decided to become an occupational therapist, it seemed a no brainer: “I would have a therapy dog that could go to work with me,” he said.

There is no national qualification certifying a dog for AAT at this time, and certification varies by state. Newton worked with his hospital to draft a policy for AAT there. He said they started with basic obedience training, and built it up from there.

“With Ember, instead of having her have to stay for three minutes, we made it eight. This enabled me as a therapist to handle any situation that could arise during patient care and not have to worry about Ember being in the way,” Newton said.

Newton said some of the training was self-education, but he was also able to find a mentor who was an occupational therapist and performed AAT. He also took courses on how to use dogs in a professional capacity for his patient population.

What are the Benefits to Patients?

The benefits of voluntary pet therapy extend to AAT, as well. Pets can serve as a calming presence and bring joy to even those who aren’t animal lovers. Animals can also break down insecurities and make people feel at ease. This was apparent with one of Ember’s very first patients, Newton said.

“This lady wasn’t really putting a lot of effort into her therapy,” he said of the patient. “She didn’t want to get out of bed, and when she did, she stayed in her wheelchair. Her therapists came to me to see if Ember might work with her. They said she always looked up and watched Ember when she was around.”

In the first session the patient had with Ember, she immediately got up to pet her. In the next one, Newton said, she walked 70 feet with the canine by her side. “That says everything about the effect a dog can have,” he added.

Because of that, Newton is already training his new pup, Sage, to follow in Ember’s paw prints. He said the 7-month-old Golden retriever is doing well with her training, and he hopes to have her seeing patients at Encompass Health Fayetteville soon.