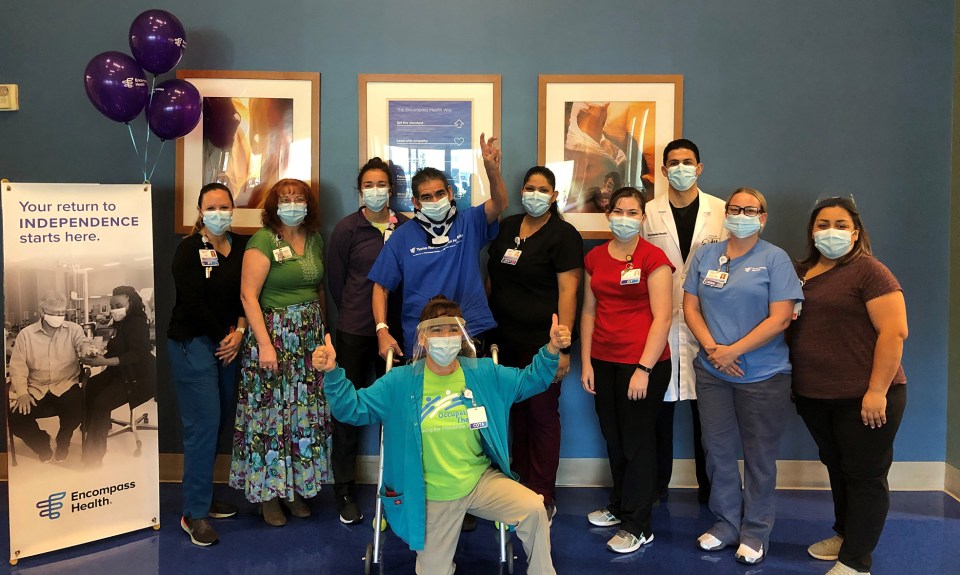 Summary: Noe Sotelo was healthy and active at age 62. However, while gathering firewood at a social gathering with family and friends, Sotelo fell, landing directly on his chin. He sustained an incomplete spinal cord injury, which left him a quadriplegic.

He underwent C3-C7 laminectomy and C2-T1 posterior fixation and fusion, but the surgeries did not return function to his legs and arms.

This case study will examine how inpatient rehabilitation helped Sotelo recover from quadriplegia. Intensive therapy combined with nursing care and frequent physician visits allowed him to walk out of Yuma Rehabilitation Hospital, an affiliation of Encompass Health and Yuma Regional Medical Center and return home with his son to live independently.

Sotelo had little to no movement in his arms and legs and required a mechanical lift or a transfer board with a two-person assist to get out of bed. He was dependent for almost all self-care tasks and activities of daily living, requiring assistance for all his daily needs, from using the bathroom to eating and bathing. Since it was an incomplete spinal cord injury, some improvements in movement and function were expected, but it was unclear at admission if Sotelo could recover from quadriplegia and regain his ability to care for himself and live independently.

We knew he would have some return, but it was unclear how much and how fast. He was really motivated, though, and made so much progress.

“I want to be able to walk,” Sotelo told his caregivers at Encompass Health Yuma. He also wanted to be able to perform everyday tasks, such as holding and talking on his phone by himself, something that wasn’t possible at admission.

Sotelo’s care team was made up of nurses, occupational and physical therapists, physicians, dietitians, rehab nursing tech, therapy tech and a case manager. Since Sotelo spoke only Spanish, and his care team spoke English, translators were also engaged throughout his stay. The care team met weekly to discuss and adjust plans for Sotelo’s treatment and recovery. Though Sotelo had little to no mobility or function at admission, he was in the therapy gym on day one, receiving the required three hours of therapy, five days a week from the start. His therapy team worked to ensure his therapy time was divided up so Sotelo could have needed breaks throughout the day, and a particularly intense physical therapy session would be followed by a less strenuous one to balance his therapy time and allow him to maintain the three hours a day.

Bowel and bladder training was a priority, as was building strength in his core. Physical therapy started on the edge of the bed or on a mat in the gym, transitioning Sotelo from laying to sitting upright. His occupational therapist and nursing team worked together to develop a bowel and bladder care plan for him.

As Sotelo progressed, his care team adjusted his therapy from sitting at the bedside to standing with the use of robotics. His therapy utilized state-of-the-art technology, such as the AutoAmbulator, a treadmill device that uses body-weight ambulation coupled with robotics to help patients walk again safely.

They also began to incorporate more activities that he enjoyed into his physical therapy sessions, such as boxing, sit ups and riding a stationary bike.

His occupational therapists looked at adaptive strategies to help him achieve his activities of daily living and other self-care goals.

They changed the accessibility status on his phone and used adaptive devices to initially assist him in accomplishing his goal of talking to out-of-town family and friends on the phone.

Sotelo was at Yuma Rehabilitation Hospital for 50 days. During that time he went from having little to no movement in his arms and legs to walking up to 200 feet with a walker. He could climb stairs and complete his transfers and almost all ADL tasks independently. Sotelo discharged home, where he lives independently with his son.

Each week Sotelo was at Yuma Rehabilitation Hospital, he made great progress toward his No. 1 goal—walking again, something he and his care team were unsure he would be able to achieve due to the extent of his spinal cord injury. Though he was initially scheduled to discharge from the acute hospital to a skilled nursing facility, the hospital level of care offered through inpatient rehabilitation provided Sotelo with the medical care he needed, as well as intense therapy to help him achieve his goals and walk again. For more information on inpatient rehabilitation and Encompass Health visit https://encompasshealth.com/inpatient-rehabilitation.