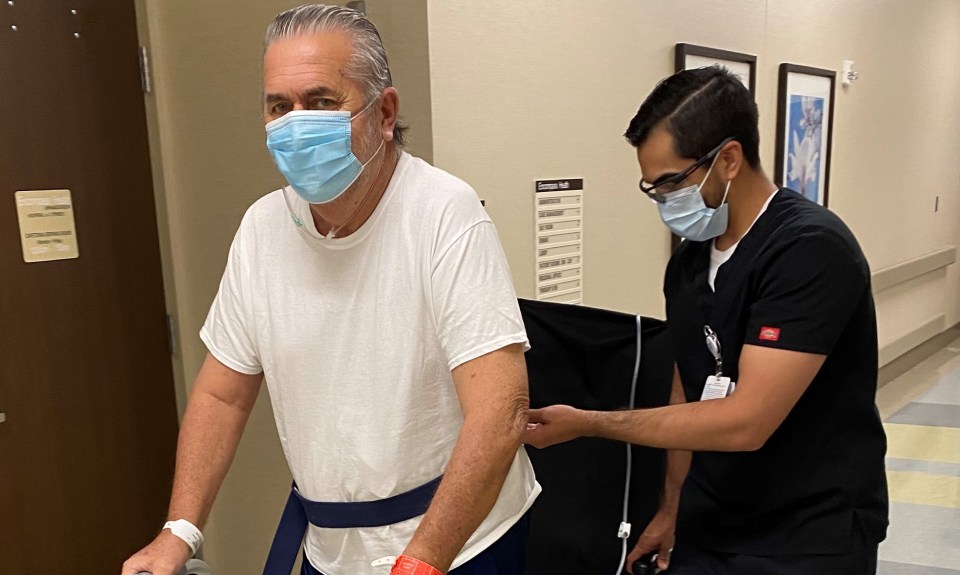 When Patrick Stacavich’s daughter dropped him off at the emergency room Jan. 18, he assumed he would see her later that day.

The pair had both been battling COVID-19. However, Stacavich’s case proved to be much more serious, so much so that instead of leaving the hospital that same day, he didn’t return home until nearly five months later.

“Because of restricted visitor policies, I had to say goodbye to my daughter at the entrance of the ER, thinking she would be able to pick me up later that day,” he recalled. “That night, my daughter got a call that I was needing oxygen.”

Stacavich’s breathing continued to worsen in the coming days; he developed pneumonia and was put on a ventilator. Then the ice storm hit Houston.

Stacavich had to be transferred to another hospital due to a water shortage. He also needed dialysis. After nearly a month at the acute care hospital, he was transferred to a long-term acute care facility, where he remained in the ICU with a trach.

Up until Feb. 10, Stacavich was unresponsive. Then his condition slowly began to improve. By March 29, he was ready to move to another setting of care, Encompass Health Rehabilitation Hospital of Cypress. Here, he would focus on rebuilding his strength and re-learning those activities of daily living that he hadn’t performed during the months he lay immobile in a hospital bed.

“It was like night and day being at Encompass Health,” he said. “It was a whole different atmosphere and culture. It doesn’t matter who I talked to, they were all willing to help and give me a hand. Everyone was positive and nice.”

When Stacavich arrived at Encompass Health Cypress, he could barely lift his head or move around in his bed. He needed “100% help from staff. I even needed someone to feed me, as I was so weak,” he said.

He wanted to get back to his pre-COVID-19 life. He wanted to be back at home with his daughter, walking again and independent.

His care team, which included nurses, therapists, physicians, dietitians and more, started small. First, they used a tilt table to assist him in getting in a standing position. Parallel bars assisted him in making his first steps, and equipment such as the Nu-Step and Sara-Steady helped him build strength and endurance.

After 38 days at Encompass Health Cypress, Stacavich was able to meet his goals. He could walk more than 700 feet with the assistance of a walker and could even climb stairs, an insurmountable task just a few weeks earlier.

“I am doing so much better,” he said. “I am able to get in and out of bed by myself. When I came here I couldn’t dress myself at all, and now, I’m pretty independent with all of it.”

Stacavich said his care team inspired him and encouraged him, but his therapists say it was the other way around.

“Mr. Stacavich is one of the very hardest workers,” said Lara, a physical therapist assistant on his care team. “No matter what we asked him to do, he was always willing to give it a try. He trusted us to help him overcome this hurdle. He is an inspiration to us as therapists and hospital staff and to all his fellow patients.”