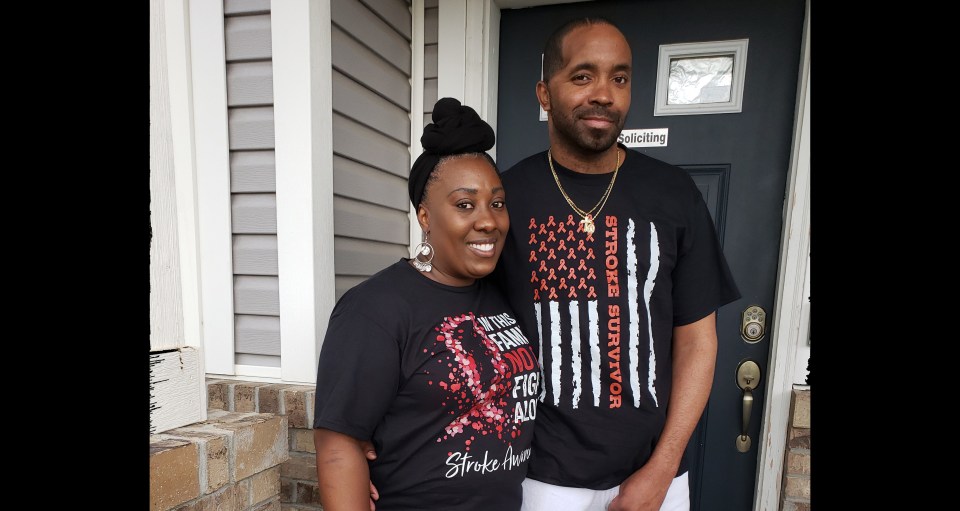 When Michael Bellamy wasn’t returning phone calls from his three children on his birthday, his wife Shayla knew something was wrong.

By 8 p.m. that night, she couldn’t stand it any longer and decided to check on him. When she found him, he was face-down on the floor, where he had been since early that morning.

Michael, a police officer and healthy at the age of 36, had had a massive stroke.

He recalls waking on July 25, 2019, feeling strange. “I went to the gym the night before, and then I went to sleep,” he said. When I woke up, I knew something was wrong. I just collapsed on the floor. I couldn’t do anything. All I could do was lay there and pray.”

Unbeknownst to Michael, he tore an artery while lifting weights the night before. The tear clotted overnight, causing his stroke.

Shayla, a case manager at Encompass Health Rehabilitation Hospital of Colorado Springs, sprang into action at the sight of her husband sprawled helpless on the floor.

He was rushed to a nearby hospital and was then airlifted to a larger hospital in Colorado Springs. The next day, Michael was in surgery to remove part of his skull to reduce the swelling in his brain. That wouldn’t be his last surgery either. In the six months that followed, Michael had a total of four surgeries.

“I knew immediately he was going to come to our hospital,” she said. “It’s the best decision we could have made for his recovery and journey. They were making sure he was able to succeed and giving him the tools he needed to go home and be successful.”

Michael has always been a positive person, but he admits it was challenging at times.

Competitive by nature, Michael used that spirit to tackle his therapy at Encompass Health Colorado Springs. His therapy team was quick to join in to motivate Michael and help him stay positive, even through some setbacks and letdowns.

He formed close relationships with his therapy team, dubbing them the “The Avengers,” complete with a Capt. America and Wonder Woman.

On Day One of therapy, he challenged his therapists to a “pull-up contest,” knowing he would have to take it slow on his left side, which was most affected by the stroke.

Michael said therapy was difficult, and some days he wanted to give up, but his team pushed him to take his first steps and grow stronger every day.

It wasn’t just his therapists helping him, however. “Everybody was willing to help out,” Michael said. “From Miss Linda in cleaning to the cooks, they all made sure I had what I needed.”

Preparing him for home

Michael’s care team focused on what Michael and his family would need to prepare them for his return home.

Knowing that two steps led to his front door, therapists focused on walking up and down stairs. Shayla counted the number of steps it would take to get to the bathroom — 13 — and his team made sure he could complete that many steps with assistance.   Now he said he can make that walk independently, though he still uses a walking stick for longer distances.

“I went from a wheelchair to walking with a hiking stick, and now I can walk independently without anything,” he said. “Physically, I’ve made a lot of accomplishments.”

Michael acknowledges he still has work to do, but adds that he can do almost everything independently now.

He is still having therapy through Encompass Health’s outpatient program, where the focus has shifted some to his cognitive abilities. Speech therapists are helping him with things like medication, money management and organizational skills.

Though he still has some work ahead of him, Michael said it’s a vast improvement and more than he could have expected after his stroke on his 36th birthday.

After a year of recovery and being in and out of the hospital, Michael celebrated his 37th birthday this year with his Encompass Health care team.