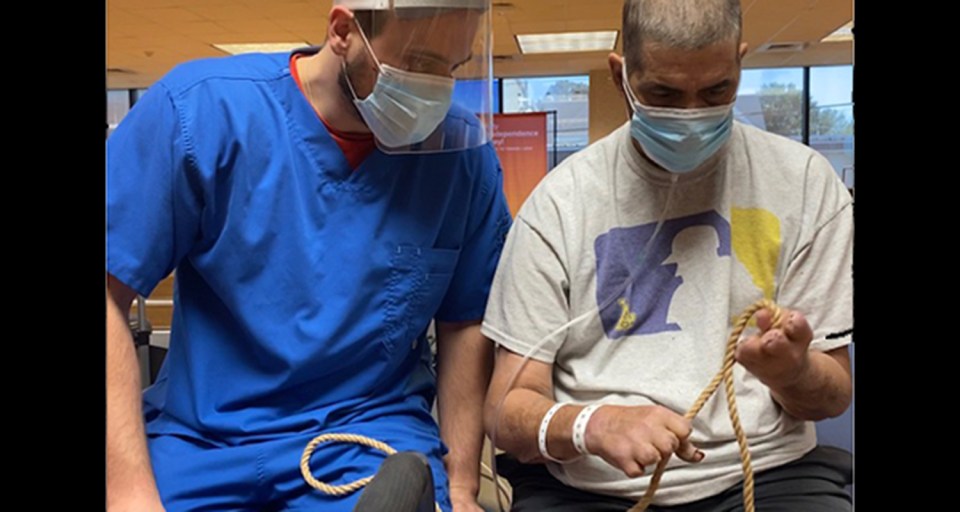 Kenneth Kiene suffered a massive heart attack followed by other complications. When he entered Encompass Health Fort Smith, all he could think about was getting back to his horses. First, he would have to relearn how to walk and other daily tasks, but his therapists decided to incorporate one of his favorite activities into his therapy — lassoing.

Kenneth Kiene was celebrating Father’s Day with his family and his parents when he began feeling unwell. Kenneth left the gathering and returned home. His wife, Kelly, returned home later that evening to find him taking his blood pressure and suggested he go to the hospital. Kenneth agreed, and that’s when his memories end.

On the way to the hospital, Kenneth became unresponsive, started jerking and slumped in his seat. They arrived at the emergency room, and over the course of the evening, Kenneth coded six times. At one point, Kelly recalls, ER staff asked her how long she wanted them to continue performing CPR.

Doctors were ultimately able to balloon the occlusion in his coronary artery. Kenneth was transferred to Baptist Health in Little Rock, Arkansas, where he was placed on ECMO, a machine that replaces the function of the heart and lungs. His condition continued to deteriorate, leading to a nine-week ICU stay.

During his stay, Kenneth had six cardiac stents placed and was put on dialysis and a ventilator. He experienced compartment syndrome and fasciotomy of his lower left leg, underwent amputation of multiple fingers and toes with gangrene and had part of his colon removed after it perforated.

“I never knew if I would get my Ken back,” Kelly said. “The doctors told me, ‘If he keeps fighting, we will fight with him.’”

Kelly’s fears were eased slightly when she and her daughter visited.

“He mouthed ‘Hi baby girl’ to our daughter,” she said. “I knew he was there.”

During the last week of his stay at Baptist Little Rock, Kenneth became more aware of his surroundings. When planning his discharge, Kelly requested that her husband go to Encompass Health Rehabilitation Hospital of Fort Smith, where her father had received therapy.

Only weeks prior to his heart attack, Kenneth had been looking forward to his retirement from his heating and air business and was planning to spend his time riding horses, roping and taking care of his herds of cattle. Now, he was simply working to be able to stand again.

“After I arrived and had my first therapies, I remember realizing that I’d have a long road ahead,” Kenneth said. “The first week here, I could not get out of bed or sit up for long on the side of the bed.”

Therapists set to work, helping Kenneth gradually increase his mobility and take his first steps with a walker. Though he may not be able to rope because of the loss of his fingers, Kenneth set goals of riding horses again and taking care of his cows.

During one session, Kenneth’s therapy team surprised him by simulating roping. Therapists presented him with a lasso and helped him stand with only minimal assistance for balance. He was able to take practice tosses and attempt to lasso his target—a cone with a picture of a cow on it.

“I cannot say enough about his stay at Encompass.” Kelly said. “When he first arrived he could barely move and now he is feeding himself, standing up and can raise his arms over his head.”

The progress he made during his three-week stay at Encompass Health Fort Smith was a step in the right direction, inspiring him to continue pushing forward each and every day.

“There is more work to be done so I can be more independent and return to riding,” Kenneth said. “I wake up every day and start again.”