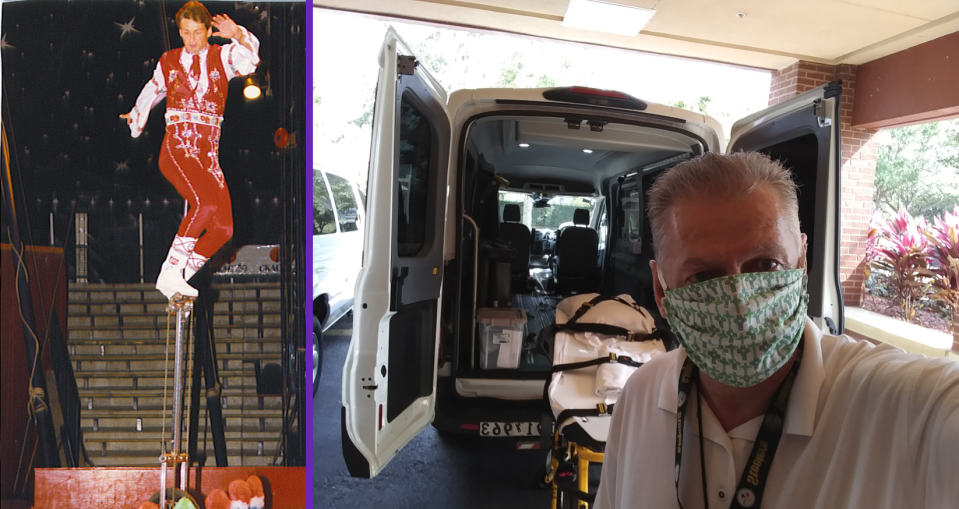 Not many people can say they grew up under the big top, but Georg Valla can. Born of Czechoslovakian parents into a circus family, he spent his childhood performing in traveling shows that brought him to cities, countries and continents far beyond a typical child’s experience.

By age four, Georg had learned to ride a unicycle, securing his place in the family business. His parents described him as having natural ability. From 1967 to the early 2000s, Georg struggles to recall a day where he did not train, perform or travel with his family—that performed under the stage name Bertini— from one circus circuit to another.

Over the years, he added a second act to his resume: the low wire. Balancing on a thin wire roughly six feet off the ground, Georg expertly jumped and cycled to the applause of adoring crowds.

“We were a circus family through and through,” Georg said. “My parents were featured by the Ringling Brothers—as a center ring act nonetheless. When my mother was pregnant with me, they performed their act on the “Ed Sullivan Show.” The bar was set very high for us, and they gave us an amazing life.”

Now 57, Georg is four years into a career as a driver for Encompass Health Rehabilitation Hospital of Sarasota in Florida, transferring patients who are leaving an acute care hospital in route to the inpatient rehabilitation facility. He dabbled in many careers after retiring from the circus industry, including working as a stage hand in the theatre sector, but the decision to become a professional driver didn’t exactly come out of left field.

“Being in the circus means your life is on the road, so transportation was a natural career path for me. I take great care in driving,” he explained.

Georg is responsible for transporting patients who are recovering from a debilitating injury or illness and are ready to begin physical and cognitive rehabilitation at Encompass Health. That means he’s often the first Encompass Health Sarasota employee that admitting patients come in contact with. It’s a responsibility he takes seriously.

“I know that my attitude and actions can affect theirs. If I’m rude or unpleasant, they might get the impression that that’s how they will be treated at our hospital, which couldn’t be further from the truth. My goal is to treat every patient like true individuals rather than just my next passenger.”

Georg’s experience traveling to different countries and meeting people from around the world during his decades-long entertainment career means he’s equipped with a special skill: a knack for detecting accents. This skill comes in handy when he’s greeting passengers.

“If I hear a patient’s accent and can tell they are from a place I’ve traveled to, say Germany or the Czech Republic, I will greet them in their native language,” he said. “It’s amazing how people’s faces light up. They’ll smile, and I’ll get them talking about their home country, which makes them feel at ease. It distracts them from nerves they might otherwise feel on the ride to the hospital.”

Georg can personally relate to many patients’ experiences, particularly the anxiety and uncertainty around recovering from a major surgery or battling a critical illness. He’s had three spinal operations and a kidney transplant, and he’s even undergone outpatient therapy over the years. Still, Georg takes it to heart when he sees someone in the throes of their struggle.

“Having been in a hospital bed before, I know how strong these patients are and what it takes to get through it. I know they are confused and concerned about the future,” he said.

While in route to the hospital, Georg takes the opportunity to explain how the nurses and therapists at Encompass Health will help them and why he has so much confidence in the care team.

Among Encompass Health’s core values is “focus on the positive.” It’s something Georg applies to his own life, the relationships he’s formed with colleagues and how he interacts with patients.

“It’s easy for me to focus on the positive. I might pick up a cancer patient or someone very young who has experienced this traumatic thing—an awful disease or accident—and I know I have it easy. Their challenges are really tough. I’m blessed to be able to help, even if it’s just making their [facility] transfer a little easier.”

“My coworkers have things covered until I return to work, which allows me to rest easier. They really understand how important recovery is, and I know they want to see me passing by on a unicycle again,” he joked.

Because he lives near the hospital, riding a unicycle to work is something Georg occasionally does to bring a smile to patients and colleagues. After all, bringing people joy is his life’s work. He continues to incorporate that positive energy into his current role.

“I keep it upbeat. That’s the only way to live.”