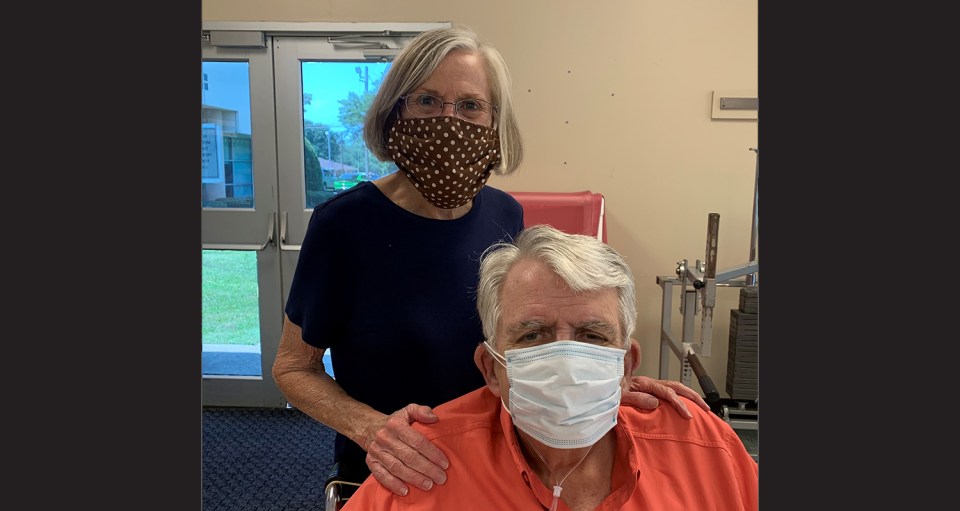 Ruth Ann Hairston gets ready to take her husband James home after a weeks-long battle with COVID-19. They both tested positive for the virus after a camping trip. However, James’ case was much more severe. After being on a ventilator for over a week, he was transferred to Encompass Health Texarkana to rebuild up his strength and cognitive abilities.

A camping trip seemed like a safe way to get away during the pandemic to Ruth Ann and James Hairston. They could spend time with friends while social distancing in the great outdoors and retreat to their motorhomes in the evenings.

That was the plan when the couple left their home in Hope, Arkansas on June 29 to meet 10 other friends.

“We were all staying in separate motorhomes, and when we did go out, we were social distancing and wearing masks,” said Ruth Ann, a former nurse instructor.

That didn’t prevent many in their party from contracting the virus. In fact, out of the 12, eight tested positive and five had to be hospitalized. James was one of those five.

Their first friend started showing symptoms the day they returned on July 3. At first the Hairstons didn’t think too much about it. The friend was mainly having diarrhea at the time, and none of the coughing and respiratory issues commonly associated with COVID-19.

“They just kept getting worse and worse,” Ruth Ann said. “By the sixth, another couple started feeling really bad, and then James and I weren’t feeling well.”

Their friends tested positive, so Ruth Ann felt sure she and James likely had it too, but with symptoms mild and her nursing background, she figured they could manage at home, as is directed according to CDC guidelines.

However, their symptoms, too, continued to worsen, especially James’. Ruth Ann described it as a “really bad flu,” accompanied by extreme fatigue and a foggy brain. She didn’t have the cough and breathing issues her husband was having, though.

It was clear after a few days that he needed emergency care. They both went to the hospital and were placed in separate rooms.

It would be weeks before Ruth Ann would see her husband again.

Ruth Ann was discharged to quarantine at home and recover, and James was transferred to the COVID-19 unit at the hospital on July 11; five days later he was put on a ventilator.

James has little recollection of his time at the acute hospital or the eight days he was a on a ventilator. “He vaguely remembers a doctor patting him on the shoulder and asking if he was still with us,” Ruth Ann said.

Ruth Ann was counting the days, though, checking in with the hospital daily to see if her husband was improving.

Finally, days after he came off the ventilator, he was able to transfer out of the ICU. When it came to the next setting of care, Ruth Ann insisted her husband go to Encompass Health Rehabilitation Hospital of Texarkana, even though it was an hour drive from the small town of Hope. Many of the nurses there had once been her students, and she trusted them to care for her husband, knowing he needed therapy to regain his strength and cognitive abilities.

It was there that she was able to see her husband again for the first time in 20 days.

“I can’t say enough about the communication; it was wonderful. They took me over to his window to see him,” she recalled. “He was so weak. You could hear it in his voice; you could see it. He was still pretty shakey.”

A long road ahead

James transferred to Encompass Health Texarkana July 29, and a week later he was preparing to go home.

His care team worked with both him and Ruth Ann to prepare him for the transition. After nearly a month in the hospital, he needed help walking again. Noting that “COVID brain” is real, Ruth Ann said therapists also helped him rebuild his cognitive abilities.

He is now back at home, but still extremely weak. Ruth Ann says even she, who didn’t have the severe symptoms, still tires easily.

James can now walk with a walker and recently regained his sense of taste and smell, which has helped with his appetite and eating. As he continues to regain his mobility and strength, Ruth Ann said they are now both ready to address some of the mental and emotional impacts of the virus.

“He’s still highly emotional and having panic attacks,” Ruth Ann said. “This scared the devil out of him, and he has a long road ahead—I do, too. We’re both talking to somebody to help us along.”