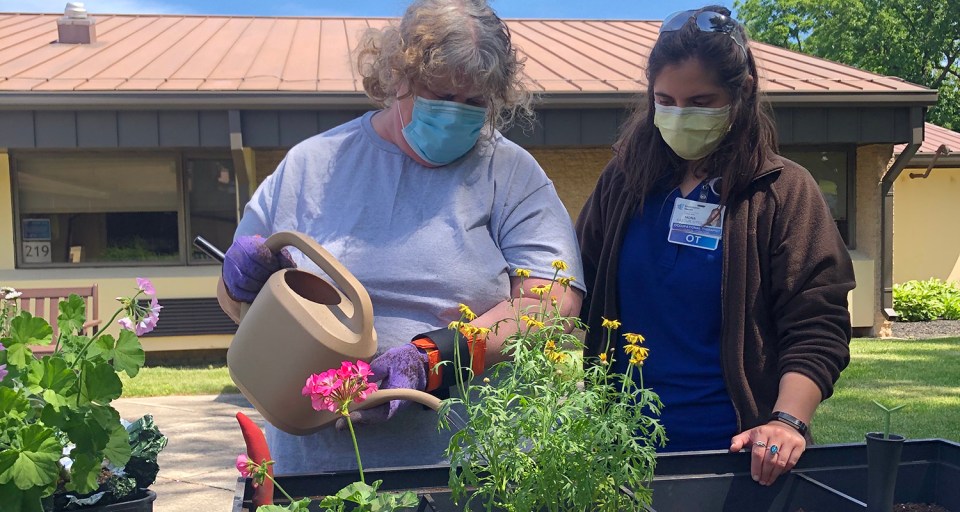 After battling COVID-19 for two months, Lynn Schaefer admitted to Encompass Health Nittany Valley to regain her independence and get back to those activities she loved, such as gardening.

Even though she appeared to be at low-risk of developing complications from COVID-19, Lynn Schaefer describes herself as “one of those people.”

She wore a mask in public well before it was the norm, and even wiped down groceries before bringing them into her home.

“I was more worried about my parents living next door,” Schaefer said. “I was doing everything right. I took off my shoes and showered after I’d been out.”

However, when her husband—who works in construction and was deemed essential—was sent home with a fever, all those precautionary measures wouldn’t matter. Days after her husband was diagnosed, she too began feeling ill. At first, she wasn’t concerned; she was only 56 and had no underlying conditions.

Then her symptoms worsened and her fever spiked.

“My husband only had mild symptoms, but I’ve never felt that sick in my life,” she recalled. “He dropped me off at the hospital because no one was allowed in. I tested positive.”

Her chest X-Rays didn’t look good, according to doctors, and after a few days, they decided to put her on a ventilator. “I thought that’s it; I’m not coming out of this alive,” she recalled.

She spent more than a month in the acute care hospital. The virus left her weak and unable to even stand, much less walk.

She was unfamiliar with inpatient rehabilitation, but, eager to regain her independence and get back to her family and those activities she enjoyed, Schaefer agreed to continue her recovery at Encompass Health Rehabilitation Hospital of Nittany Valley.

“I couldn’t get out of bed by myself and was using a bedpan; I had to have someone feed me,” she said. “I knew nothing about rehab or Encompass Health, but I knew I needed help. They gave me some physical therapy at the hospital, but it took two people to sit me up, and I could stand for maybe 20 seconds. That’s as far as we got.”

That wouldn’t be enough to get her back to tending to her gardening, as well as her family of five. She came into Encompass Health Nittany Valley with some lofty goals, but she said her care team was up for the challenge.

The eight days she spent at Encompass Health Nittany Valley made a world of difference. Her physical therapist helped build her strength, so she could stand and walk again, and her occupational therapists helped her relearn some of those daily tasks that Schaefer said she would never take for granted again.

“It’s those things we don’t even think about,” she said. “Being able to walk or pick something up. When those things are taken away, it changes your whole way of looking at everything. I had a great team of therapists. They worked me hard, but they were fun, too.”

They even got Schaefer outdoors—something she hadn’t done in nearly two months—working in the rehabilitation hospital’s therapy garden.

Though she still tires easily and her lungs feel “stiff,” Schaefer is now back home getting back to some of those activities she enjoyed pre-COVID. She doesn’t know why the virus hit her so hard. Nor does she know why she survived when so many others in her condition have not. She does know that if it wasn’t for the therapy and care she received at Encompass Health Nittany Valley, her recovery and return to independence would have taken much longer, further separating her from her family.

“It’s so wonderful to come home; I can’t describe it,” Schaefer said. “So much has changed. My daughter has her license. I feel like Rip Van Winkle, who woke up and everything was different. I’m thankful to be here. I don’t know what the future holds or what the long-term effects of this virus might be, but I’m getting back in that yard and on that tractor.”