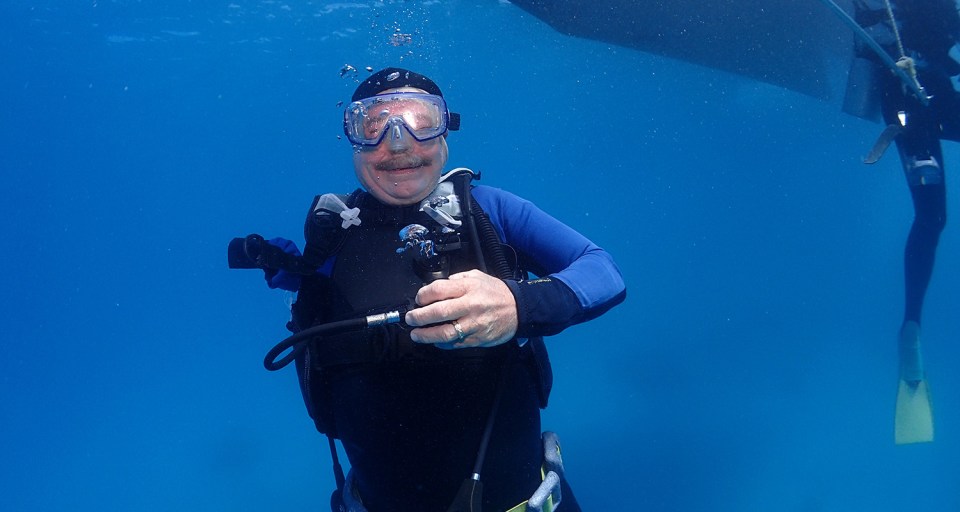 Before his stroke, Victor Short was an avid scuba diver. After therapy at Encompass Health Rehabilitation Hospital, he said he’ll be back at it soon and has almost fully regained his independence.

Stand tall—it’s a mantra Victor Short’s therapist repeatedly preached to him. However, it’s something he feared he would never do again after his stroke.

At 57, Victor was active, biking 30 to 40 miles per day and an avid scuba diver. On May 3, that changed. He was working in his garage, and after falling from his ladder began feeling sick. Then he lost feeling in his right leg.

Thanks to his neighbor, he made it to the hospital where he learned he had a stroke. After 10 days there, his doctors said he would need more help in his recovery. They referred Victor to a nursing home.

“On the second day there, Victor demanded I get him out,” said Patricia, Victor’s wife and primary caregiver. “I had a friend recommend Encompass Health Rehabilitation Hospital of Cypress, and that’s where I wanted him to go.”

From crushed to empowered

On May 14, he was admitted to Encompass Cypress in Texas. At the time, Victor had lost nearly all his independence and was losing hope that he would ever regain it.

“My spirit was like—this is what my life is going to be,” he recalled. “I was pretty crushed.”

He arrived at the hospital at night and headed to therapy the next morning. His therapy team, consisting of occupational, physical and speech therapists, was there to work with him and challenge him to regain his strength and independence, so he could return home and to those activities that mattered most to him pre-stroke.

“He had a physical therapist by the name of Macey, and his life will forever be in her debt,” Patricia said. “From the moment they met, she challenged his every move. Macey’s favorite thing to say to Victor was ‘stand tall.’ There was no slacking with this therapist.”

Since the primary caregiver plays a vital role in rehabilitation, Patricia was allowed to sit in on therapy sessions despite visitor restrictions due to the COVID-19 pandemic. Special precautions to keep her and her husband safe were in place, which included limiting Patricia’s access to Victor’s room, but that didn’t stop her from playing an active role in his return to independence. Once his therapy team finished working with him, “I would work him,” she said.

Empowered by his new team and Encompass Health Cypress, Victor made a goal early on to walk out of the hospital. He also wanted to focus on regaining movement and strength in his left arm. He lost his right arm in a childhood injury, and the stroke left his left arm limp.

“I had no control over my left arm and left hand,” he said. “I needed help feeding myself and needed 100 percent help with all activities.”

During the 29 days Victor was at Encompass Health, he had a minimum of three hours of therapy a day, five days a week. His team used technologies like Lite Gait and NuStep to help get him walking again. It was hard work, he said, but it’s what gave him hope that he could return to his independence.

“Therapy was my lifeline, getting challenged to regain my former life,” he said. “The therapists encouraged me that I could do it, and they had faith in me, so I didn’t want to disappoint them.”

Victor didn’t disappoint. On June 12, he walked out of Encompass Health Cypress and was able to stand tall once again. Today, Victor is back home partaking in some of those activities he loved and living independently once again.