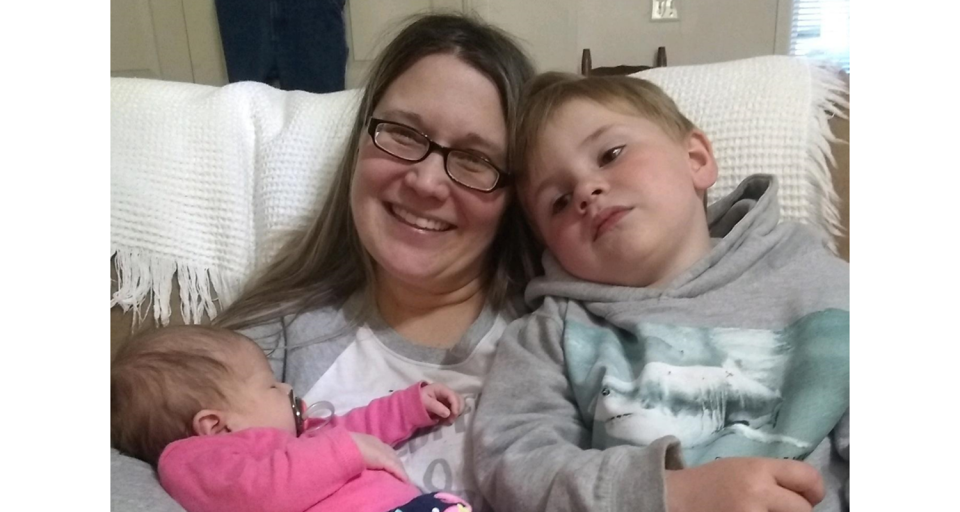 Terra Norris with her children, Sophia Grace and Zane Alexander

It was supposed to be a happy time—exhausting, but happy.

Terra Norris had just returned home with her new baby girl. The delivery went smoothly, and she and her now family of four were looking forward to getting settled.

Sophia Grace was born two weeks early; Norris is thankful for that every day. On the day she expected her daughter to arrive, Norris’ world was turned upside down.

“It was on a Sunday night,” she recalled. “I had this weird ringing in my ear and was dizzy. I thought I was getting a migraine.”

Norris wasn’t having a migraine; it was something much more serious. Her husband quickly called a friend who is a nurse, and based on Norris’ slurred speech, she advised the couple to go to the emergency department immediately—Norris was having a stroke.

She spent two weeks in the hospital and another two in rehabilitation at the Rehabilitation Hospital of Bristol, a joint venture of Ballad Health and Encompass Health. There, she was highly motivated to get better—she wanted to hold her baby girl and hug her 3-year-old son—something she wasn’t able to do for over a month.

Norris was admitted to the acute hospital on March 29, a time when strict visitation policies were in place due to the COVID-19 pandemic. It was a relief when she arrived at the Rehabilitation Hospital of Bristol; as her primary caregiver, her husband, was allowed to see her, and her family was directed to her window where she was able to see them for the first time in weeks. That first moment she saw them was highly motivating, Norris recalled, because she knew it would take work to be able to care for children again.

“I missed them both like crazy,” she said of her daughter and son, Zane Alexander. “It was really hard on my son because he couldn’t understand why he couldn’t see me, and I wanted to hold my baby girl. I was so worried she wouldn’t even remember me. When you have a baby, that skin-to-skin contact is so important. My kids were my motivation to keep going and get stronger every day. That helped me make it through.”

When Norris entered the Rehabilitation Hospital of Bristol, she had little movement on her right side, and her speech was still slurred and off. After a few days, she and her speech therapist noticed a drastic improvement in her speech. She also worked with a physical therapist to regain her strength, and an occupational therapist to help her relearn those daily tasks and help her care for her family again.

Today, Norris is back at home, caring for her babies. She’s walking, albeit sometimes with the help of a walker. Her son, she said, is back to being his “wild and crazy self,” and the first thing her daughter did when she was placed back in her mother’s arms was smile.

“My homecoming was just wonderful,” she said. “I held her in my arms all day long. My son was a little confused, especially when he saw the walker, but as the day went on he got back to himself. He told me he was glad I was back from the hospital. That just melted my heart.”

Norris said having a stroke was scary enough, but having to be separated from her family, especially after welcoming a new child, added another level of fear. She said her care team at the Rehabilitation Hospital of Bristol helped ease that anxiety and realize that with a little hard work, she could be home soon holding her daughter and hugging her son.

“If it wasn’t for the staff at Encompass Health, I wouldn’t have been able to stay positive,” she said. “They just treated me with kindness and really cared about me. They made me work hard, but that’s what got me home.”