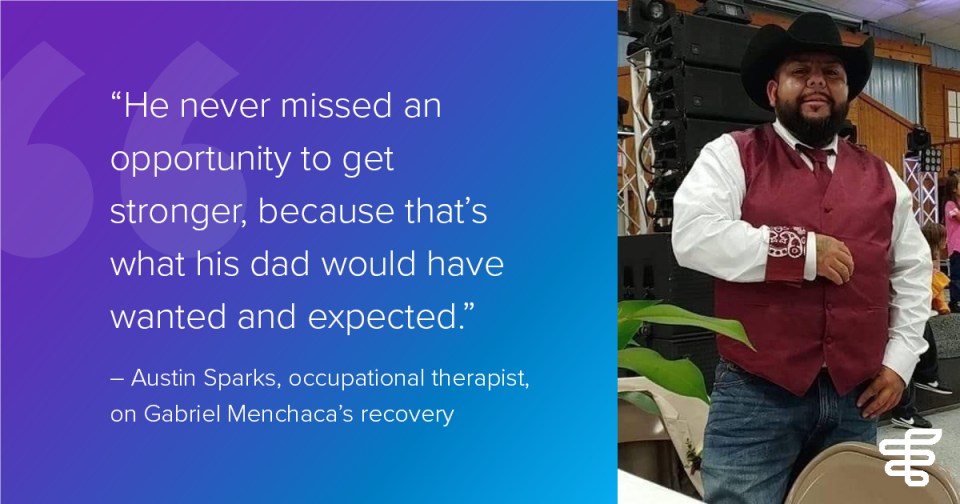 Gabriel Menchaca was not sure what his father meant by the question.

His father asked again, “Are you ready?”

Trusting his father had his best intentions in mind, as he had for his entire life, Menchaca answered yes, he was ready for whatever his father wanted of him. His father then thumped him on the forehead.

That’s when Menchaca woke up.

He found himself under the bright lights of a hospital room, intubated and connected to wires that were connected to beeping and blinking monitors. His father was nowhere to be found; he was down the hall in his own room at the same hospital. The two were both in intensive care fighting for their lives against COVID-19.

More than just the flu

In the middle of March, Menchaca began feeling unwell. At first, he assumed that he had the flu. Quickly, though, he realized the sickness he had was far more than the run of the mill flu virus. A diabetic patient who beat kidney cancer only six months prior, Menchaca knew his immune system was compromised and went to a local emergency room for evaluation and was discharged.

Still, Menchaca knew something was not right. He went to Baylor Scott & White Medical Center where he was tested for COVID-19 and told he would be contacted in a few days with his results. The test was positive. Menchaca was one of the first cases of community spread in the area.

Only a few days after his first positive diagnosis, Menchaca had difficulty breathing. His girlfriend took him to the emergency room, where the staff sent him straight to an isolation room.

“I texted my girlfriend and told her I was in the room waiting for a doctor to come in, and I’d call her and let her know when something happened. I called my mom, too,” Menchaca said. “Next thing you know, that’s it. That’s the last thing I remember.”

Menchaca’s mom told him that when staff came to check on him, he was passing in and out of consciousness. They rushed him to the ICU, where he went into a coma for three-and-a-half weeks.

While he was unresponsive, Menchaca’s care team provided regular updates to his mother, but he was unable to have visitors due to restrictions in place because of the pandemic. His care team reported on the complications he was experiencing, including collapsed lungs. At one point, his family was told he wasn’t responding to treatment, and might only have 24 to 48 hours left to live if his condition continued to worsen.

“They told my mom if I survived—and they emphasized the if—that I would need months of speech therapy. I’d have to do so much therapy to regain my strength and walking, and they told her I wouldn’t be the same for a while. They told her I’d be in the hospital for months, probably until August.”

Meanwhile, Menchaca’s father was battling COVID-19 just down the hall at the same hospital.

Menchaca remembers having three vivid dreams while in his coma—the third and final was when his father, Amos, affectionately called Famous Amos by his friends and family, thumped him on the head right before he woke.

Shortly after Menchaca woke from his coma, Amos Menchaca passed away. Only 67 years old, Amos did not have any underlying conditions of which his family was aware.

“My dad was a righteous man. He followed the Lord, and he wasn’t scared to die. He knew where he was going,” Menchaca said. “I don’t know if anybody believes me, but I think he talked to the Lord one day and made a plan, and the Lord let him see it through. I went from almost dying to waking up eyes wide open, talking like nothing happened, lungs breathing. I believe he made the ultimate sacrifice and gave his life for me.”

Immediately after waking, Menchaca remembers being very alert and eager to speak. When questioned by his doctors, he believed he had been in the hospital only a couple of days—three at the most. After he was extubated and given his cell phone, Menchaca called his mother.

“She didn’t believe it was me,” he said. “She said, ‘Whoever this is, stop playing.’ I told her it was me, and she just busted out crying hysterically.”

He rehashed the conversation with his brother, who similarly couldn’t believe what he was hearing. Though they knew Menchaca had finally started responding to treatments, they had been told repeatedly that he wouldn’t be able to speak anytime soon after spending so long on a ventilator.

Menchaca was transferred to CHI St. Joseph Health Rehabilitation Hospital, an affiliate of Encompass Health, to continue his recovery. His lungs were severely damaged by the virus, and he didn’t have the strength to complete everyday tasks. But, he had the strength instilled in him by his father, and he and his therapy team set to work.

He spent a week and one day in rehabilitation, defying the expectations his care team had when he was in the early stages of his battle against COVID-19.

“He never missed an opportunity to get stronger, because he said that is what his dad would have wanted and expected,” said Austin Sparks, Menchaca’s primary occupational therapist. “Motivation and drive is something I can’t typically teach my patients. A lot of times, you have it or you don’t, and Gabriel had it.”

Menchaca is still going to therapy on an outpatient basis. He still gets winded easily because of the damage to his lungs and still lacks the strength and endurance he once had, but he knows that will come back in time. His body went through a lot during last two months, but he finally is beginning to feel like himself again.

“I don’t have enemies, but I wouldn’t wish what I went through on my worst enemies—the trauma, the hurt and the loss,” he said.

Although he lost his dad to the virus, Menchaca knows that he has been with him every step of his journey.