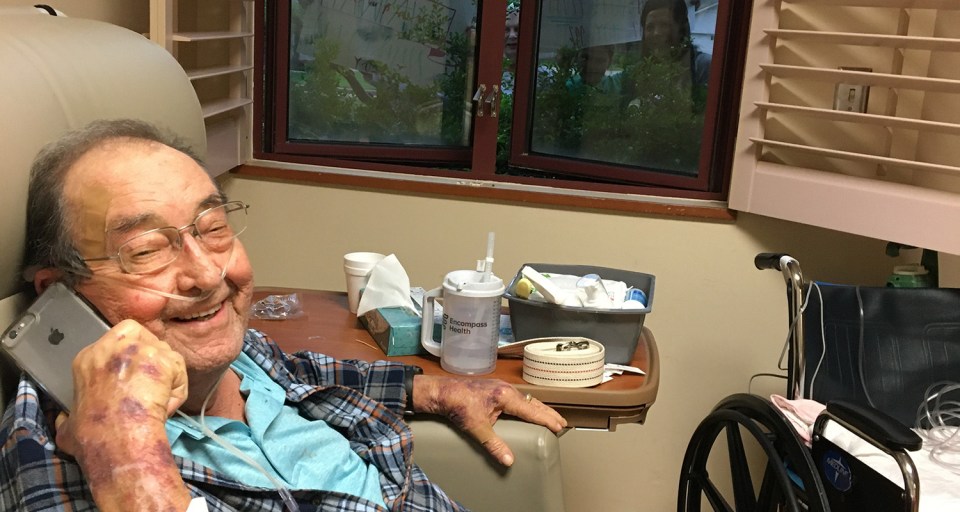 Encompass Health Patient Bill Manry talks to family and friends outside his window.

Even when health issues had Bill in and out of the hospital, Lorraine was always there by his side.

When the COVID-19 pandemic restricted hospital visitors, she was thankful her husband was at home, as was the rest of his family. They all hoped to keep it that way, but in late March, Bill fell and broke his hip.

“I cried when it happened, and said ‘we don’t need to go to the hospital now,’” Lorraine recalled. “We didn’t have a choice, though. I was so nervous with this virus and knowing I couldn’t be with him. I didn’t know what to expect.”

Bill spent several nights in the acute hospital away from his wife and family. After treatment there, he transferred to CHI St. Joseph Health Rehabilitation Hospital, an affiliate of Encompass Health.

At the time of his admission, protocols were already in place to protect patients and employees from COVID-19, including a restricted visitation policy. As his primary caregiver, Lorraine could visit, as caregiver training is an integral part of inpatient rehabilitation. However, that time is limited, and wouldn’t include all the nearby family that is accustomed to seeing their dad and granddad almost daily. Like many patients hospitalized at this time, they were concerned about not getting to visit him.

Justin Kous, director of case management at the hospital, said visitor restrictions have been challenging, but his staff has worked hard to find other ways to connect patients with their family and friends. Bill and his family are one example of that, he added.

“I’ve really been inspired by how our case managers have really thought outside the box in getting families like Mr. Manry’s connected,” he said. “In the midst of all this darkness, this was huge encouragement for us. It brought tears of joy, especially when we were able to reunite them.”

Separated from his family but connected by his care team

Bill is now back at home with his family, but his daughter Missy still remembers that first day he entered the rehabilitation hospital. She was anxious that she couldn’t be by his side Her fears were quickly calmed.

“That first day, we were trying to find a nurse or someone who could help us to see if we could just stand by his window,” she said. “We didn’t want to bother them; we know they’re frontline workers. We just wanted to see him. Rhonda instantly reached out and was so sweet and helpful the whole time.”

Rhonda Boeker was Bill’s case manager. During the two weeks Bill was in rehabilitation, she kept him connected with his family.

After talking with Missy, Rhonda showed Lorraine where her husband’s room was on the outside of the building. That way, she could see him through the window while they talked on the phone.

“She took a picture of that and texted it to me,” Missy said. “It meant a whole lot more than she probably realized.”

Missy’s daughters, Cace and Cadence, also got to see their granddad, even if it was from a distance.

“Not being able to be with him was really the hardest, so when we were able to see him it was the best,” Cace said.

Boeker said it’s been challenging for patients to not receive visitors, so any time they can help make that connection it is worth it.

“While it has been heartbreaking at times to enforce the visitor limitations in our hospital, we all understand the need for patient, family and staff safety,” she said. “When we are able to offer small gestures of love and encouragement, it inspires us all to carry on in the hope that this crisis will end. Our staff will continue to be a light to our patients and families in this difficult season.”