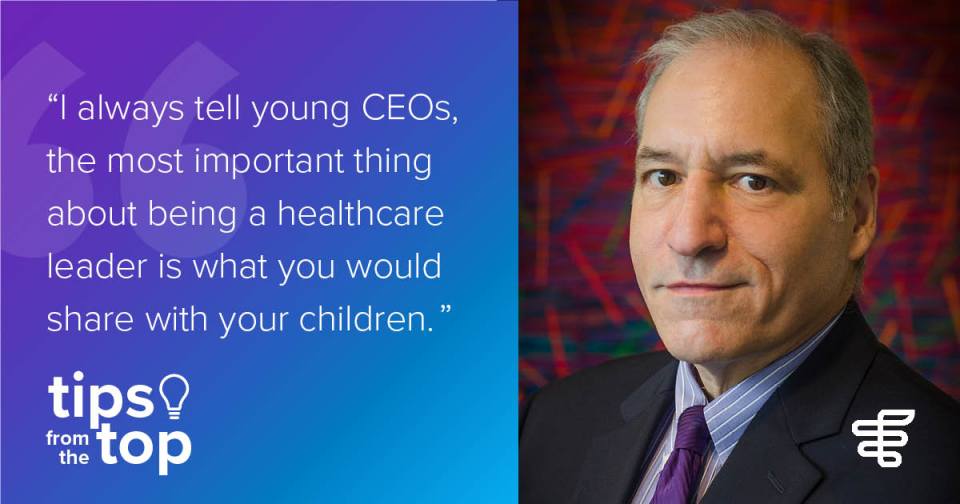 “I always tell young CEOs the most important thing about beig a healthcare leader is what you would share with your children.” – Peter Mantegazza, Encompass Health Northeast Regional president

Peter Mantegazza spent most of his childhood in and out of hospitals as a visitor.

Since the age of 12, he knew he wanted to work in healthcare—not because of the positive experience he had while visiting his chronically ill father. To the contrary, he recognized how flawed the system was, and he wanted to fix it.

“As a little kid, I knew more things about hospitals and how to make them more efficient than the people running them. At an early age, I decided to get into hospital administration,” he said. “By the time I was in high school, I was on a path to get my bachelor’s in business administration and then my MBA in healthcare administration.”

He joined the company, then HealthSouth, in 1995, as a hospital CEO and held several leadership positions over the past 25 years before settling into his role as the northeast regional president in 2008.

Though it’s been decades since he sat at his father’s bedside, the lessons he learned then shaped him into the leader he is today. Years later, they were reaffirmed when Mantegazza became a patient himself.

Mantegazza recalls sitting by his dad’s bed, ringing the call bell anytime he needed something. He also remembers that the call bell was never answered fast enough for his father.

“I would always think, why doesn’t someone just walk around, so we don’t have to ring that bell all the time?” Mantegazza said. “Fast forward 40 years, and they call that hourly rounding, and it’s a good thing to do.”

Being chronically ill, Mantegazza said his father was always on medication—lots of it.

“I was always amazed at how many medications he was on; it was like a shopping bag full,” he said. “Of course, he would forget to take them and didn’t understand why he was taking them. Each doctor he saw would add more meds but not take him off any of the others. I just thought it was so wasteful.”

At Encompass Health, pharmacists work with patients to ensure they not only understand their medications, but also that they aren’t taking any unnecessary ones.

The patient’s care team also begins working early during a patient’s stay to ensure they are prepared to return home. Mantegazza could never understand why his father’s caregivers didn’t do the same.

The lessons learned caring for his father as a young child still hold true today. However, he was not done learning. Perhaps the most important lesson he learned was when he was the patient.

A positive attitude can make all the difference

In 2013, Mantegazza had a health crisis. He was diagnosed with a heart condition similar to the one that took his father’s life at an early age. At several points, Mantegazza thought the condition might take his, as well.

“It was a life or death situation,” he recalled. “There was more than one occasion when I was told, ‘you might want your daughters to visit to say their goodbyes,’ but what kept me going during those times was I was waiting for a heart.”

He was told it would take two to four years to receive a transplant. During that time, he couldn’t travel—something difficult for a regional president presiding over multiple hospitals in multiple states. He considered retiring; Encompass Health President and CEO Mark Tarr encouraged him to hold off and assigned him some duties to be done remotely while he was “on the bench.” Mantegazza is glad he did.

“A few months after that conversation, I got my heart,” he said. “The recovery was actually miraculous.”

While Mantegazza was in and out of the hospital waiting for his new heart, he realized just how dependent he was on his caregivers and the importance of a positive attitude.

“One day, my nurse had had a really bad day,” he said. “She was really upset and venting about how bad her day was. I’m looking at her sideways. I’m hooked up to tubes and all that, and I said, ‘yep, but you still get to go home.’ She looked at me tearful, and said, ‘right, I’ll never forget that.’”

Neither will Mantegazza. You can’t vent to patients, he said, and you have to maintain a positive attitude, even though it might be difficult.

Mantegazza’s advice to those entering healthcare administration: Be a hero to your kids

Working in healthcare administration, it’s easy to get bogged down by the numbers, Mantegazza said. Whether it’s patient outcome measurements or dollars and cents, there are a lot of numbers in healthcare. Instead of getting lost in all those, Mantegazza looked more to what his kids thought about what he does.

“I always tell young CEOs, the most important thing about being a healthcare leader is what you would share with your children,” he said. “They don’t know what EBITDA is, and they don’t understand any of the metrics or all those acronyms we use. If you talk to them about any of that, they’ll go cross-eyed, but if you tell them you made someone better today; you helped them get well; or you helped somebody walk again—that makes you a hero.”

No matter how far you are from the frontlines of patient care, Mantegazza said you can never lose sight that it’s always about the individual patient and getting them better.