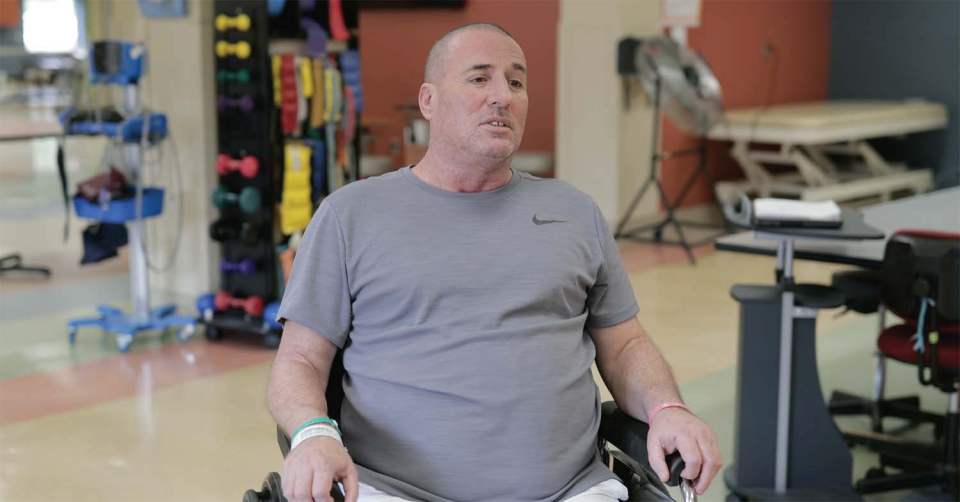 Kenny Santos accomplished something no one ever thought he would days before he was preparing to leave Encompass Health Rehabilitation Hospital of Huntington—he walked 50 feet.

Months before, that would have been the simplest of tasks for this retired nurse, who was accustomed to being on his feet and rounding on patients. However, his mobile lifestyle came to a halt last year.

After complications from a routine surgery—Santos was unresponsive with no heartbeat for more than 15 minutes—he suffered a non-traumatic brain injury. Even sitting on his own was nearly impossible.

When he was admitted to Encompass Health Huntington in West Virginia, his body was so overcome with tremors, he couldn’t sit in a wheelchair, Debbie Wilson, his physical therapist assistant at the hospital, recalled. He could talk, but only in broken sentences.

“He was very dependent,” Wilson said of when she met Santos in early January. “His tremors were really aggressive. That’s what we had to work on first, how to get those under control.”

Wilson started by putting a weighted vest on him to slow the shaking. She also placed weights on Santos’ feet.

Once his tremors were under control, she was able to help him build his strength back so he could work on daily activities, such as dressing and eating.

This is where the hospital’s interdisciplinary team approach really benefited Santos in his recovery. While Wilson was helping him with balance to stand again, his occupational therapist was helping him learn to dress.

“We have an occupational therapist partner that we carry the same patients as,” Wilson said. “So, while I’m doing stuff to help him stand, she was helping him learn to stand and dress. We like to say that PT gets you where you are going, and OT shows you what to do when you get there.”

She added that speech therapy, “reminds you why you’re there in the first place.” Santos’ speech therapists not only focused on getting him talking in full sentences again, but also helped him with cognitive issues such as memory and problem solving.

Santos was at Encompass Health Huntington for just over a month. Thanks to the work of his therapy team and support and encouragement from his family, he was able to walk those 50 feet with a walker before he left and was encouraged that those first steps would soon lead to many more.

“They really put me at east here,” he said. “I felt safe and assured that I was in the right place for rehabilitation. I’ve been a nurse for 30 years, and I can appreciate those who go out of their way to help you. At Encompass Health, it’s not only the nurses, but also the therapists. I have the utmost respect all of for them. They were always looking to help me do my best.”